What was the improvement that Maxwell did to the electromagnetic field equations and why?

What was the improvement that Maxwell did to the electromagnetic field equations and why?

I understand that he combined the main equations so that you could get a wave equation for the vectors of $\bf E$ and $\bf B$ but is there anything else?

Until Maxwell added some terms to the set of equations they were Gauss' Law, Ampere's Law, Faraday's Law, and the fact that there is no magnetic monopole. The equations then read:

The reason why he introduced this term was that there was inconsistency in the equations. I find it easier to use the integral form of Maxwell's equations to show the inconsistency he has found. The integral equation of Ampere's Law reads:

Where $S$ is an open surface $\partial S$ is the boundary of the surface and $I_{penetrate}$ is the current that penetrated through this surface.

Notice that the surface you attach to your loop is of no importance. That is you are free to choose the surface with which $I_{penetrate}$ is defined. However without Maxwell's correction this leads to some complications as I mentioned above. 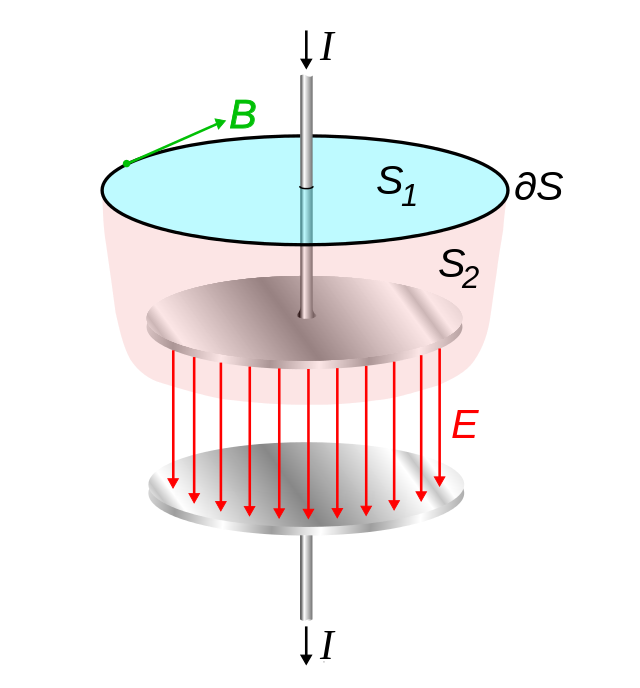 For example you want to calculate the magnetic field around a wire which connects a battery to a capacitor. Let the $\partial S$ be the boundary over which you integrate. As I mentioned, you are free to choose your open surface. Assume that you choose $S_1$ as indicated in the figure I borrowed from Wikipedia. There is a current and the right hand side of the equation $ (1)$ is clearly not zero.

Since you can choose whichever surface you like assume that you have now chosen the surface $S_2$ and now there is a problem because there is no current flowing between the capacitors. Therefore the right hand side of the equation $(1)$ is zero, which is a clear contradiction.

He noticed that a changing electric field created a magnetic field and he corrected the Ampere's equation. Incidentally he named the term he added namely $\mu_0\varepsilon_0 \pdv{E}{t}$ the displacement current.

As a side note Maxwell's intention was not to fiddle around with equations so that they form a wave equation. As he was working on the equations he had no idea that light was a wave. It is however true that he has shown theoretically that light must be an electro-magnetic wave, though he was not able to show it experimentally.

Not the answer you're looking for? Browse other questions tagged electromagnetism maxwell-equations history or ask your own question.

0
What arguments did Maxwell use to add the extra term in Ampère's original law?
0
Motivation for Maxwell-Ampere equations

2
Regarding Electromagnetic Plane and Maxwell equations
2
Uncertainty-principle and the Maxwell formalism of electromagnetic waves
2
Difference between action-at-a-distance and a field according to Maxwell?
2
Homogenuous Maxwell Equations in the Language of Differential Forms
0
Maxwell Equations and magnetic field?
9
Is there a general way of solving the Maxwell equations?
1
Why Maxwell thought that aether was needed?