I was driving down a major highway today and the fog was thick enough I could barely see 40 ft in front of me.

I then wondered if I had had some other form of perception could I have perceived my environment more clearly. For example, echolocation.

How would fog affect the signals echolocators send? Would the distortion be negligible or would the presence of this medium significantly alter the sound waves enough to make information unreliable?

According to this link sound (especially high frequency sound) is more attenuated in fog, because it is dispersed by the (billions of) air-water interfaces of all the droplets. This is one reason why a fog horn is a very low sound - low frequencies travel further, especially in fog. For echolocation you want to use high frequencies, and fog is more attenuating at those frequencies. Another site confirming this information is this one - slightly older than the other one. Of course one might wonder whether one article got its information from the other (it does look similar...). 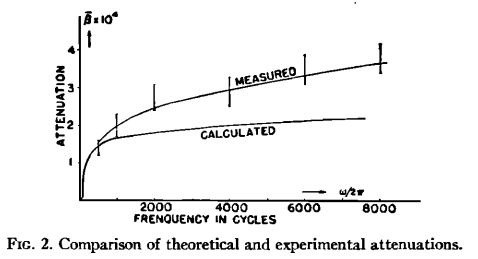 Even with the question of attenuation - when visibility is reduced to 40 ft, echolocation will probably beat it handsomely at intermediate distances. There are a couple of other interesting things you can do to improve your ability to see in fog.

1) Yellow "driving glasses". These work because they cut out the blue components of light. When fog droplets are very small, light scattering is in the Rayleigh regime - that is, scatter probability goes as the inverse fourth power of the wavelength, and blue (400 nm) light is 16x more scattered than red (800 nm) [note - using round numbers...]. By cutting out the blue component, you reduce the amount of scatter that reaches the eye and improve the contrast. Skiers also use yellow "fog glasses".

2) Scanning light source. This is one of those magical things that ought not to work but does. With normal (flood) illumination, light scatters "from everywhere to everywhere". If instead you look along the line of (say) a laser shining into the fog, then the only scattered light you see is the light that scatters exactly 180 degrees back at you - which is a small fraction of all the scattered light. If you scan the light source and detection system in sync, and very quickly, you can build up an "almost scatter free" image. This raster scanning technology is used in some underwater search applications and can penetrate about 6 "attenuation lengths". As was discussed in the comments, this method actually works best when the viewing angle is not exactly 180 degrees - not only is the back scatter from the fog weaker (there is a curious doubling of scatter intensity that happens at exactly 180) but also, by looking at a slight angle, you are able to eliminate the back scatter from the closest fog - greatly improving penetration.

More recently researchers in Israel have come up with a way to image through thin layers of scattering material - as you can see in the link, they are also able to see "through fog" (although it was not clear to me whether their technique can apply to actual imaging in fog).

From the Wikipedia article on fog:

Sound typically travels fastest and farthest through solids, then liquids, then gases such as our atmosphere. The distance the water molecules are from each other, and temperature, are the reasons sound is affected during a fog condition. Molecule effect: Though fog is essentially water, the molecules are barely touching each other. High pitched sounds have a high frequency, which in turn means they have a short wavelength (velocity = f x lambda). This means that to transmit a high frequency wave, lots of air has to be moved back and forth, and very quickly; consequently, there can actually be a loss or damping effect of high pitched sounds because they wouldn't travel as far as they might when not being refracted off of separated water molecules which make up the consistency of fog. In contrast, low pitched notes, with a low frequency and a big wavelength, are moving the air less fast and less often, so the losses are reduced. Therefore, low-pitched notes are less affected by fog and will also travel further, thus the low pitched tone of a foghorn. Temperature effect: A fog occurs during a temperature inversion where cold air is pooled at the surface helping to create the fog, while warmer air sits aloft. This reversed boundary between cold air and warm air, is able to reflect sound waves back toward the ground, allowing sound that would normally radiate out escaping into the higher atmosphere, to bounce back and travel near the surface. Hence, a temperature inversion increases the distance that lower frequency sounds travel by reflecting the sound between the ground and the inversion layer.

Not the answer you're looking for? Browse other questions tagged waves acoustics atmospheric-science weather or ask your own question.

2
How can electric field accelerate fog dissipation?
10
Why fog and water have such a good relationship
7
Why does fog float?
6
Does fog clean the air of fine dust
2
How would music sound in different atmospheres?
4
Is it true that there would be no snow without dust?
13
Do bats use special relativity when they use echolocation?