From limited knowledge, decades ago, dating back to the nineteenth century:

At that time there was no alternative but to think in terms of energy and mechanics rather than information and neurons.

The human was considered a machine.

Physics of how the cochlea isolates frequencies along its length?

Is the change in cochlear potentials dependent on perilymph velocity?

give many indications, confirms the suspicion that with regarding auditory sense, we really again go all the way back to the analysis of the sound energy, as was already suggested by Ohm decades ago,

by discovering 'The non stationary Bernoulli effect' inside the cochlea, actually, suggested in 2010: that there is: "the incoming sound pressure stimulus is differentiated – according the transfer from sound pressure to perilymph velocity – and squared – according the transfer from perilymph velocity to cochlear microphonics."

Of course, the term acoustic energy is justified until the hair cells act (by the biological particulars of the human ear).

Correspondingly, one can check by physics to what extent inherited terminology like „acoustic energy" is still appropriate to the defenition of acoustic energy, that the sound pressure is squared and there the logarithm is taken.

And put a corresponding investigation into question:

After all, is it not that what explains the 1/f character of pleasant music?

1/f spectra have the unique distinction of being "scale invariant" in the sense that the energy in an interval df is proportional to df.

The 1/f spectra in fact have the property that the in an interval with width df available energy is proportional to df but not with f. There, namely "scale invariant" attribute for. It is not the energy, but the signal amplitude with which 1/f scales.

Also for the sound spectrum usually offered to our hearing, it is like that. And it turns out that there are very many natural sources to have a 1/f spectrum distribution.

I have heard it said on a number of occasions that 1/f spectra are very commonly encountered among natural signals, and one might perhaps expect the auditory system to reflect this fact in its design.

In nature it is quite normal that there are noises generated by noise sources, and the noise spectral energy density - the sound energy per frequency band with constant width - is constant.

But that also means that the sound signals provided by the sources themselves consist of frequency fees, which have amplitudes inversely proportional to their frequency f. Which leads to the so-called 1/f spectrum.

If the hearing of mammals differentiates - so there out of the sound pressure signal per frequency contribution f also an f time greater perilymph velocity, which neutralizes the existing 1/f factor therein - and then squaring, so that the final sound energy signal anywhere on the basilar membrane therefore no longer depends on the frequency f, the auditory sense is in the best possible way adapted to the perception of sound sources with a 1/f spectrum.

Looked at classroom and offices, respectively, and generally found that the spectrum of summed background sounds rolls off (declines in amplitude) according to a 1/f function, somewhat similar to pink noise.

That's because both natural sources, but also the most musical instruments inside the generated energy with constant spectral energy density - so 1/f spectra exciting - are broadcasting periodic noises.

Of course 1/f rules: not unlimited in long-term spectra. But there does not exist in nature normally indefinitely sounding by sound sources.

1/f, a reasonable approximation of the occurring spectral energy density.

And now that Bernoulli effect inside the cochlea: differentiating and quadrating.

From here, we can make use of the so-called 1/f relation for sounds found in nature. By this 1/f relation, the sound pressure amplitude p0i of a pure tone in a tone complex will be reciprocal to its frequency fi . Immediately, the reason for the preference for 1/f sound contributions becomes clear: The signal strength of each stimulus contribution on the BM (basilar membrane) becomes frequency independent. Not surprisingly, this well-established 1/f quality of sounds is a phenomenon that is omni-present in nature. The mammalian auditory sense shows a perfect adaptation to such sounds.

Sometimes: that 1/f character is just globally. It makes sense to me because nature is never exact in every detail.

But sure: there is a lot of 1/f associated with in nature, the speech and music sounds. And one wonders whether it affects the functioning of the auditory organ. But for me: It looks now: Or is it not more the other way around: the mammalian auditory sense shows a perfect adaptation to such 1/f sounds.

When a theory suggests that our hearing differentiates and squares. And that then the brains, of the most obvious, is getting evenly distributed sound energy frequency signals. So it benefits from that the noise amplitude spectrum is of the nature of 1/f.

In fact: the occurrence of 1/f spectra and hearing then show a logical duality. And then: Considering 'the term acoustic energy is justified until the hair cells act', Yes: the true physical value of the acoustics energy is then proportional to both the square of the amplitude and to the square of the frequency, if one considers that the mammalian cochlea differentiates and squares the incoming sound pressure signal inside the cochlea itself, in terms of physics, totally hydrodynamic in origin, contrary to that an early neural mechanism is responsible for it, contrary to brain processes it. Totally hydrodynamic in origin! Non stationary Bernoulli effect inside only the cochlea.

So now, to take a position about a terminology of acoustics energy:

Consequences of this for audiologic research:

This curve expresses the data for the sensitivity of the human hearing sense.

It shows the hearing threshold based on the sound pressure level dB scale [dB SPL].

In an equation this quantity is expressed as:

The Fletcher-Munson curve in a graph: 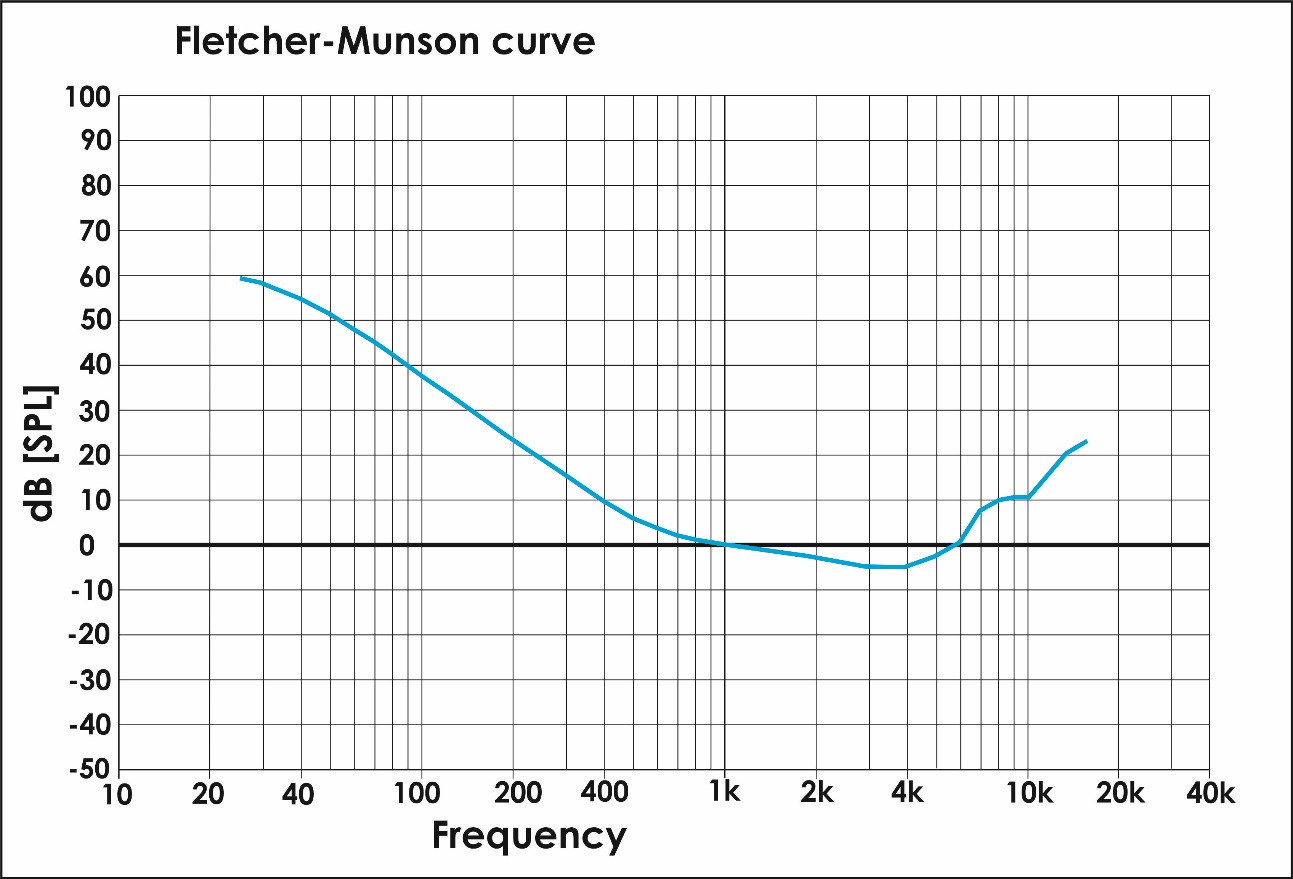 It is only flat in the frequency region between 3 and 4 kHz.

Beyond the frequency domain important for humans.

The final result is given by:

Or between 'sound energy level' and 'sound pressure level':

And this means that from dB(SPL) to dB(SEL) we have to correct the Fletcher-Munson curve with a subtraction of 6dB/octave:

In the graph this is given by: 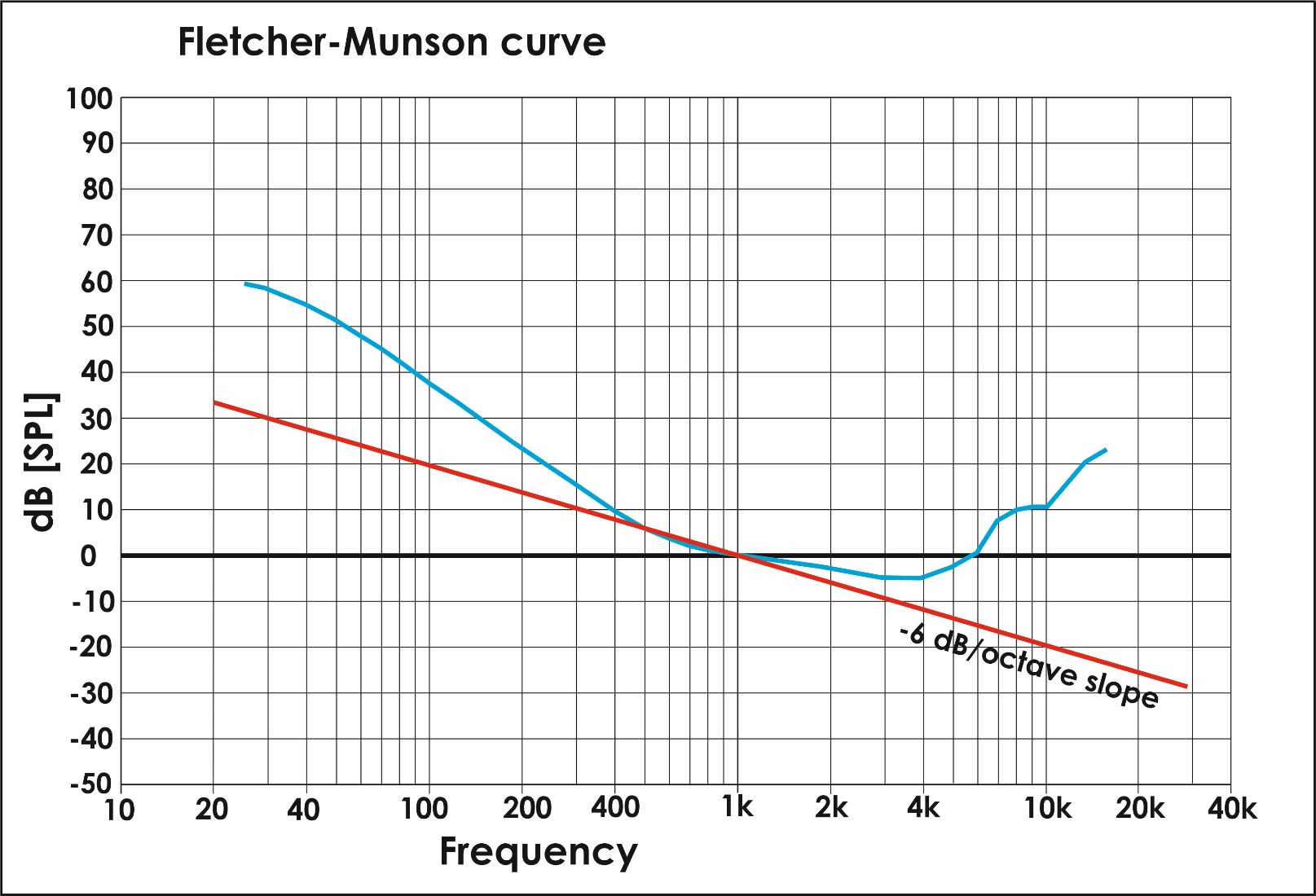 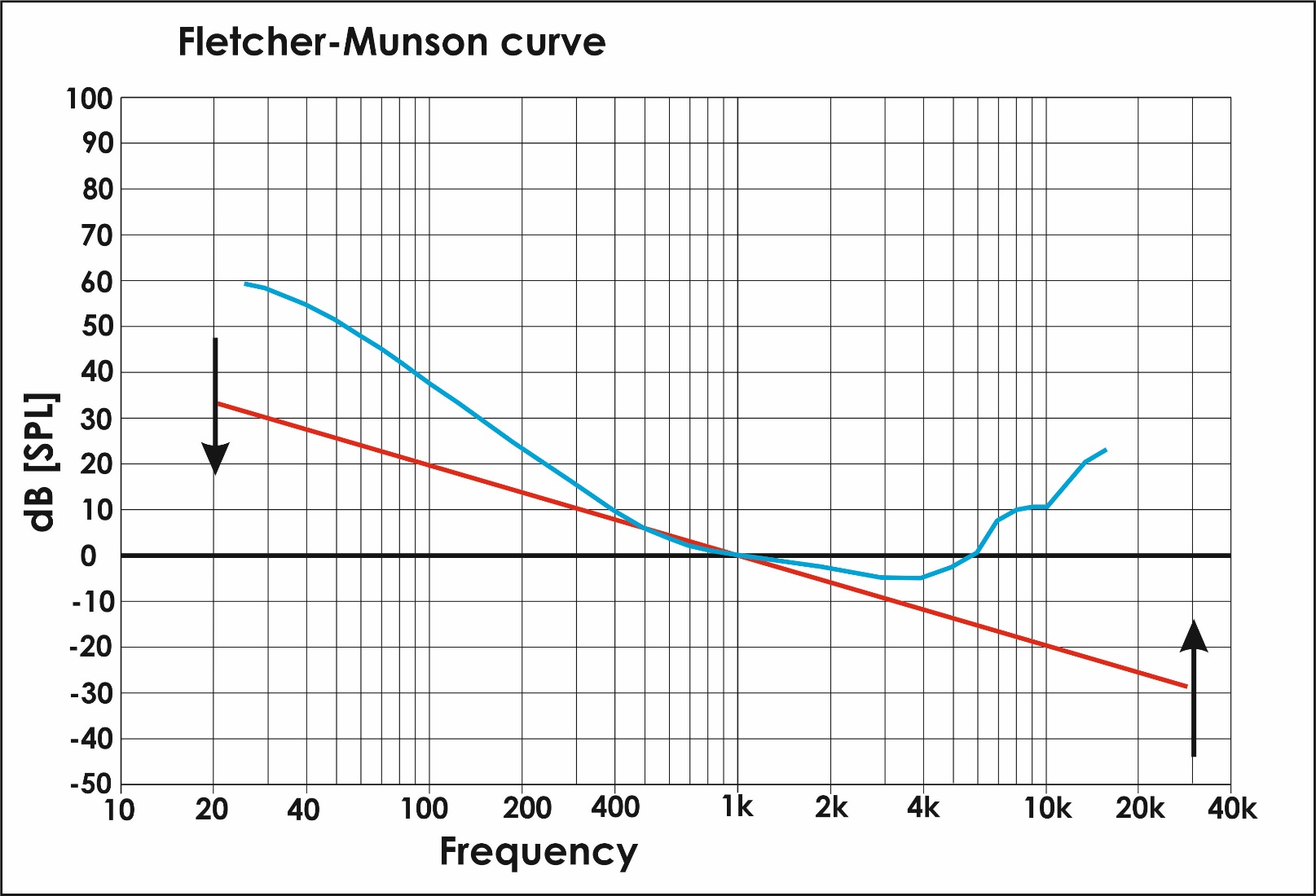 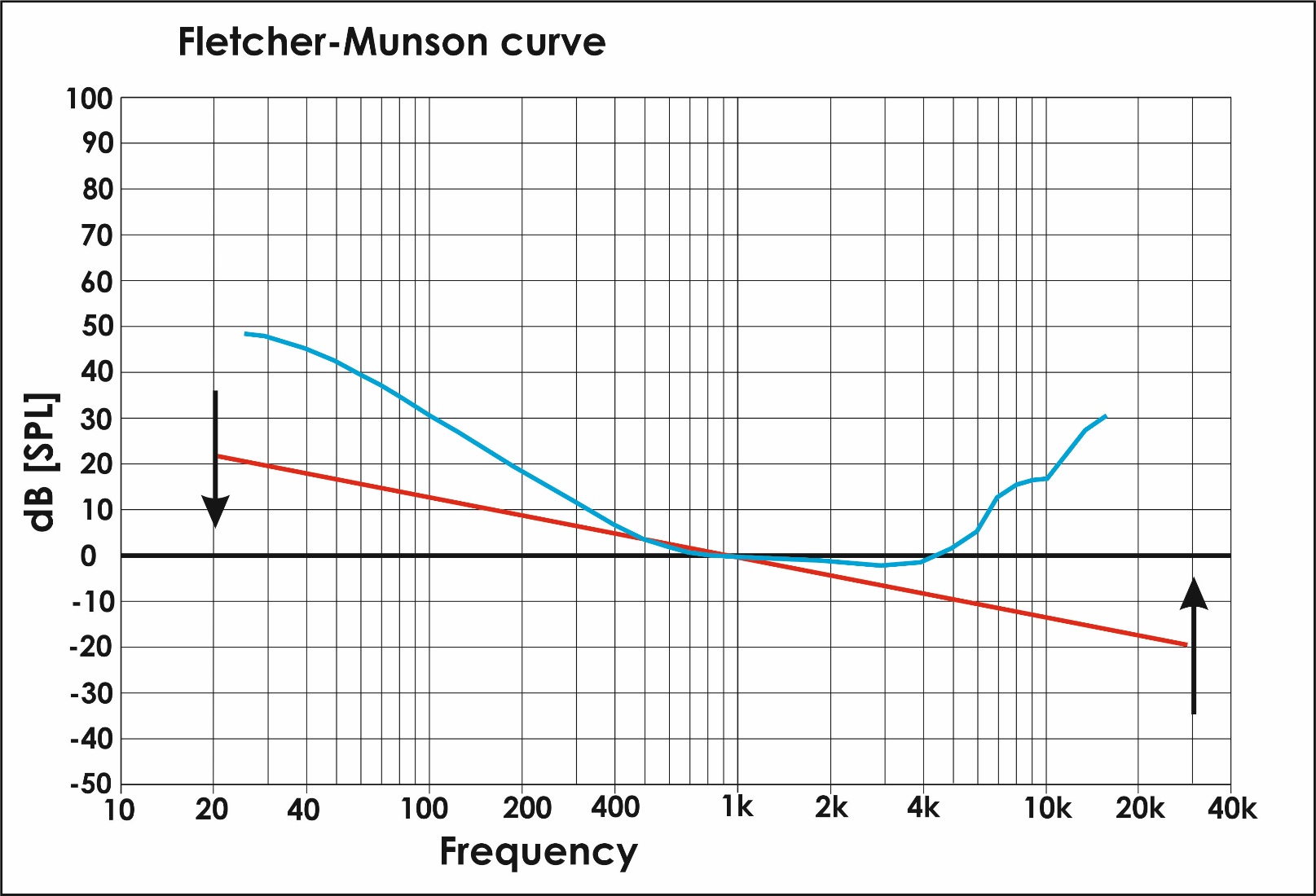 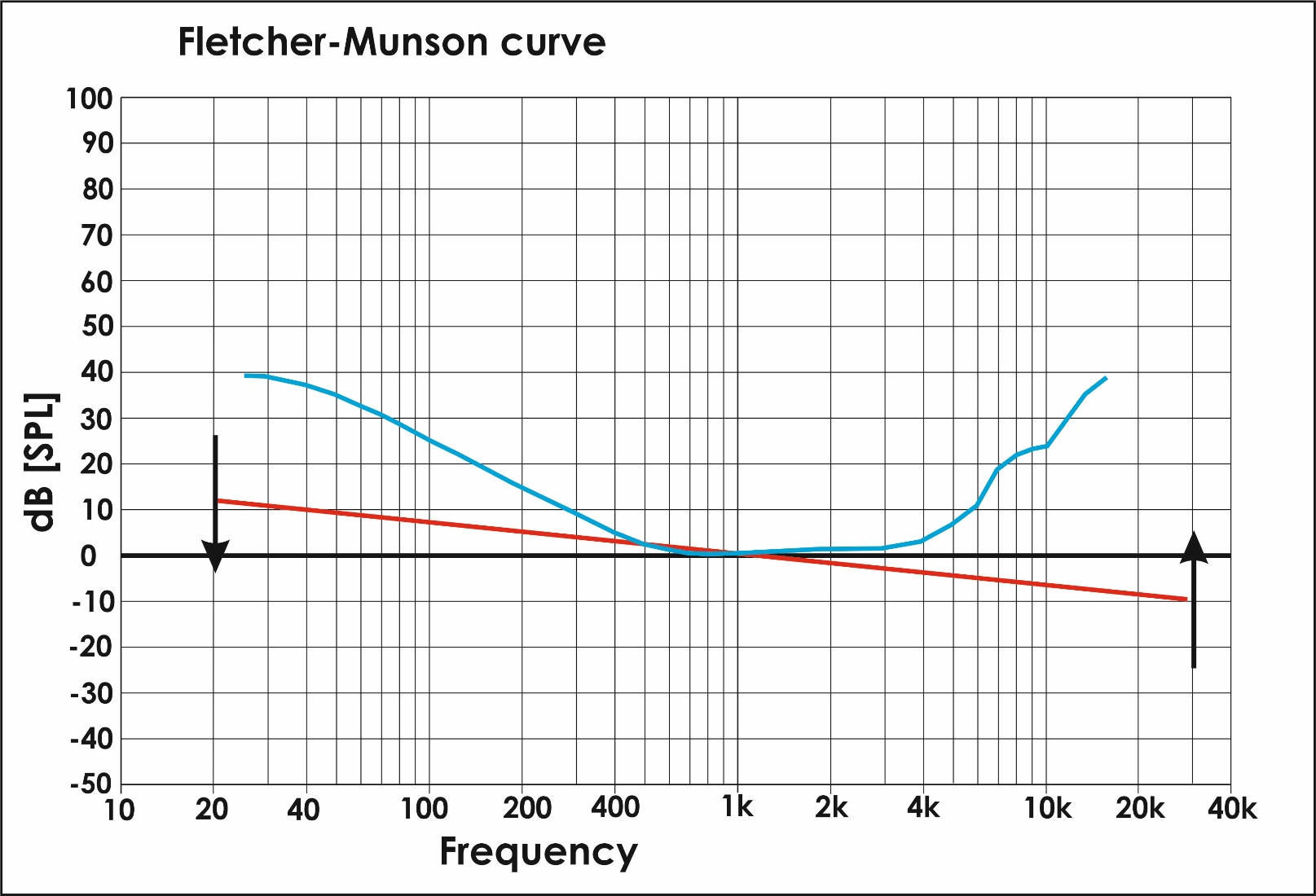 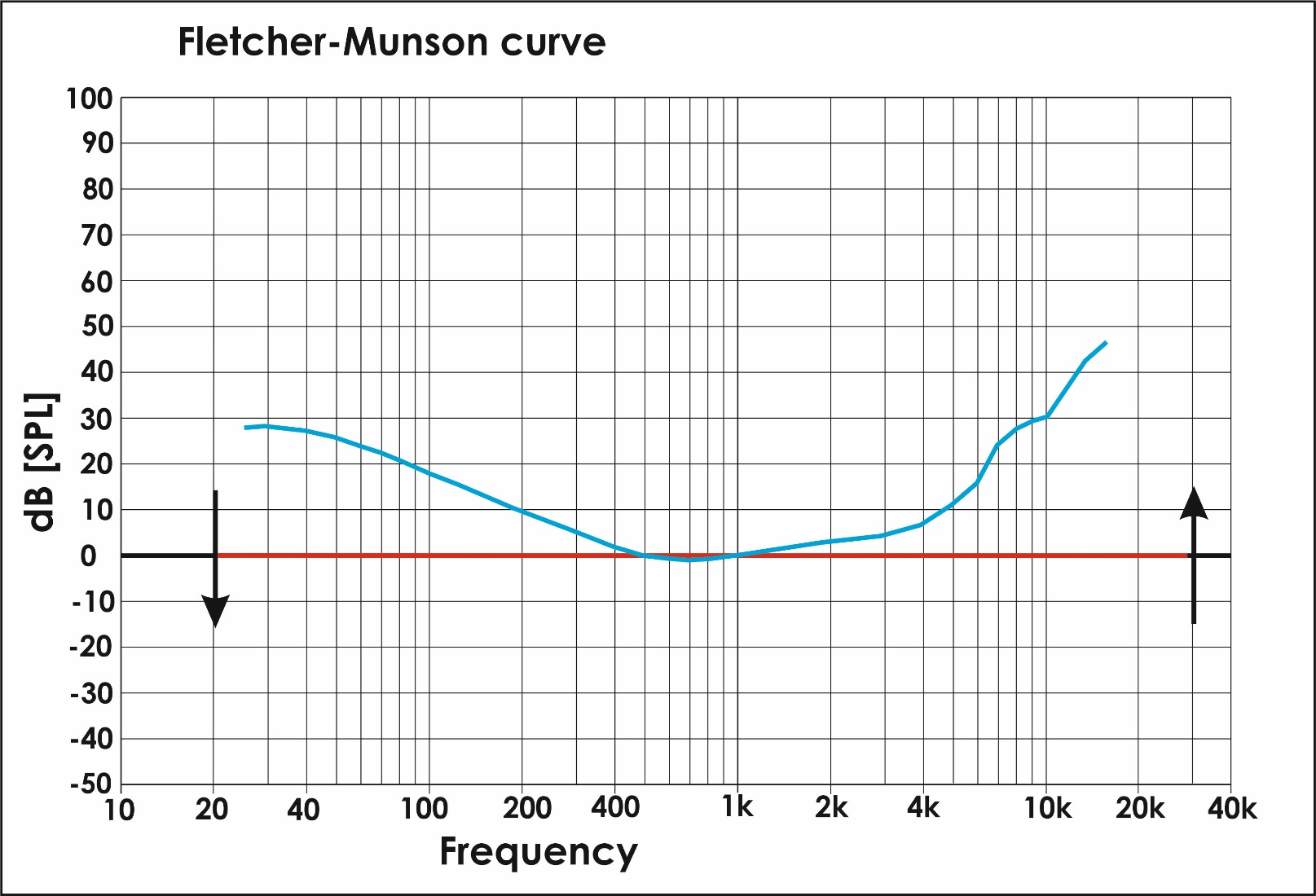 And now the curve shows the sensitivity for sound energy contributions: 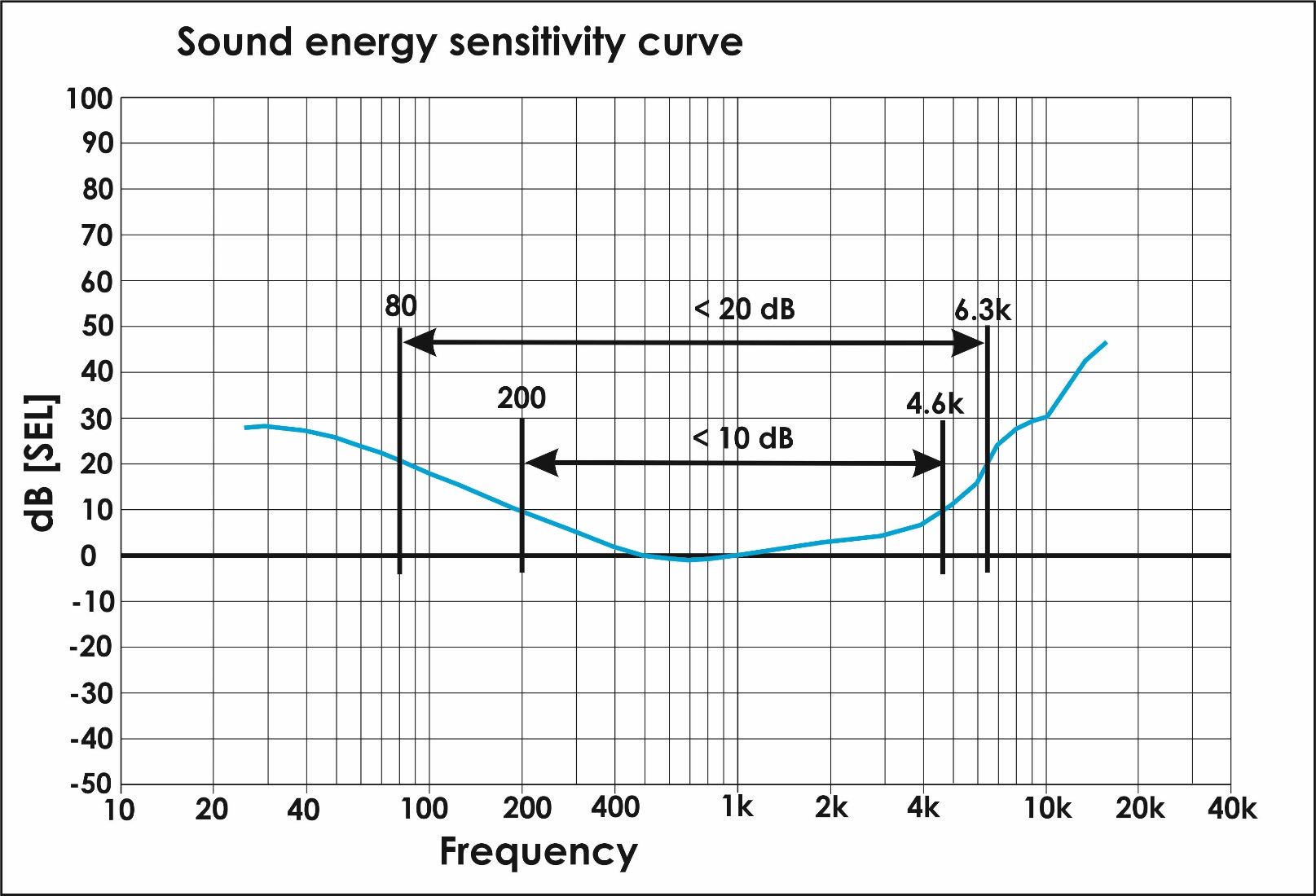 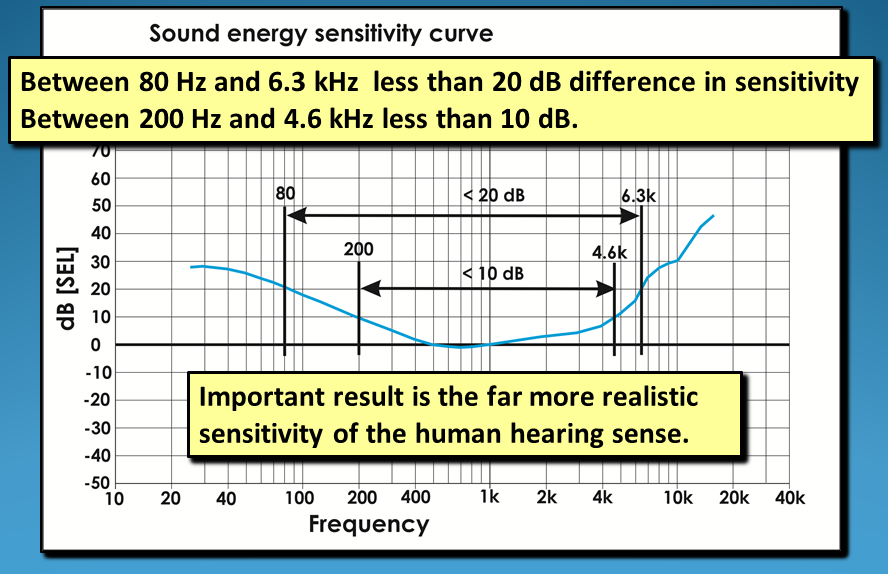 This audiology phenomena is explained in a way when we follow the paradigm in which the cochlea analyzes the sound energy frequency spectrum. In terms of physics, totally hydrodynamic in origin.

Here we have explained:

Modification of the Fletcher-Munson curve based on dB[SPL] scale into the dB[SEL] scale by a -6 dB/octave correction.

This all together forms the basis for the appreciation of 1 / f sound compositions.

In the hearing world and the sound recording world - based on auditory - one makes use of the so-called dB [SPL] [Sound Pressure Level] values.

These are then found by making use of the so-called "least squares" [Root-Mean-square] average calculation.

And then systematically - if one does not consider a differentiating and squaring process in the cohlea - one makes only use of the Fletcher-Munson curve.

In fact if you look at the definition of dB SPL, which stands for "decibel sound pressure level", to calculate realy everyting all right, using those dB SPL calculations, one can now look further also at the influence of the frequency thereto. If you do so, you'll see that with a same soundpressure at 2000 Hz the dB SPL value compared to that one of the 1000 Hz, is a factor 4, i.e. 6 dB higher than with using the existing definition of the dB SPL to calculate the value.

That's because it overlooks the fact that with the same pressure amplitude in each volume the same mass present at 2000 Hz moves two times rapidly as at 1000 Hz.

And then the energy of motion is still proportional to the square of the velocity.

Which means that for each octave there a 6 dB must be subtracted.

And that it is equally again connected with the Fletcher-Munson curve or isophone zero dB, the correction curve in use by audiometry.

If you apply there the 6 dB per octave correction, you see suddenly that most of that remarkable notability of the auditory sensitivity to rising pitch in the most sensitive field of our hearing disappears.

That means it is mutually so closely related.

This all together forms the basis for the appreciation of 1 / f sound compositions.

Not the answer you're looking for? Browse other questions tagged fluid-dynamics energy energy-conservation acoustics potential-energy or ask your own question.

25
Physics of how the cochlea isolates frequencies along its length?
3
Is the change in cochlear potentials dependent on perilymph velocity?

0
Internal Energy Terminology
1
Terminology question about energy
41
How much information about the scale of a waterfall can be obtained from its sound?
6
(Why) would unmaintained water heater use more electrical energy?
0
Relationship Between Acoustics and Gravity?
1
Confusion about reflection, acoustic impedance
4
Architectural acoustics
0
Questions about potential energy and its corresponding force