Angular and linear displacement of a turning car 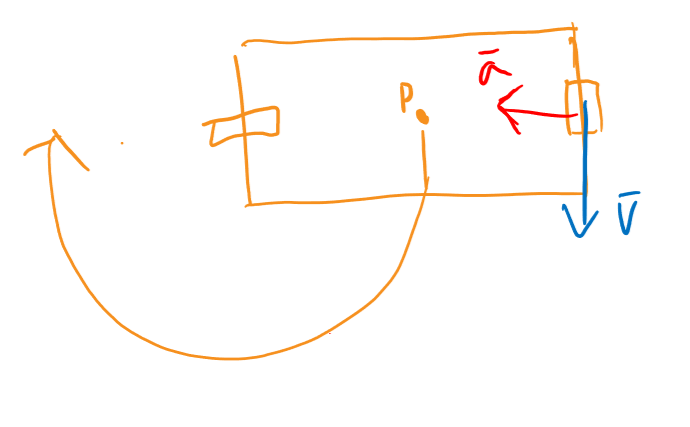 My illustration is supposed to show a simplified car (with just two wheels, where the front wheel has been rotated $-90 \text{ degrees}$). Let the car travel at constant speed. This means that the only horizontal force on the car is the centripetal force, which acts towards the rear wheel since we're rotating around it. The result of this is that point $P$ in the middle of the car will move along the half circle I've drawn.

I'm wondering how this is possible, since we just have radial acceleration (which should only change the direction), but obviously, as the car moves, both its angular and linear displacement are going to change.

Based on the centripital force $F_c = \frac{mv^2}{r}$, where $r$ is the distance from the wheels, how is the linear displacement of the outer wheel and the angular displacement about $P$ calculated?

Am I thinking about this the wrong way? A part of me also thinks torque should be involved.

As the car turns around, since the car is a rigid body(ideally), not only will the rear wheel experience a centripetal force, but also other parts of the car. You can illustrate this by recalling your experience in a car when the car turns around. You will feel a force pushing you in the direction of rotation. So every part of the car is experiencing a centripetal force and doing a circular motion. Also, I think you do not mean to say angular displacement and linear displacement, object in circular motion has both angular and linear displacement. Do you mean motion in centripetal and tangent directions?

Not the answer you're looking for? Browse other questions tagged newtonian-mechanics kinematics rotational-kinematics centripetal-force or ask your own question.

9
Physical Variables of Circular Motion
2
Centripetal force in this example?
1
What position of the center of gravity can make the front wheels of the car lift off the ground?
0
Finding radius of turning car to calculate the centripital force
3
What causes a car's velocity to follow the front wheels' direction?
2
A car with constant speed doing a turn
3
How do car wheels use friction to accelerate?