Why do electrons and protons in Van-Allen-Belt behave like this?

In a book I have read that in the Van-Allen-Belt there are the protons and electrons from the solar wind. What I do not get, is why they should behave that way illustrated in this image. Why should the protons be closer to Earth and the electrons farther away? And why should they bounce from pole to pole? 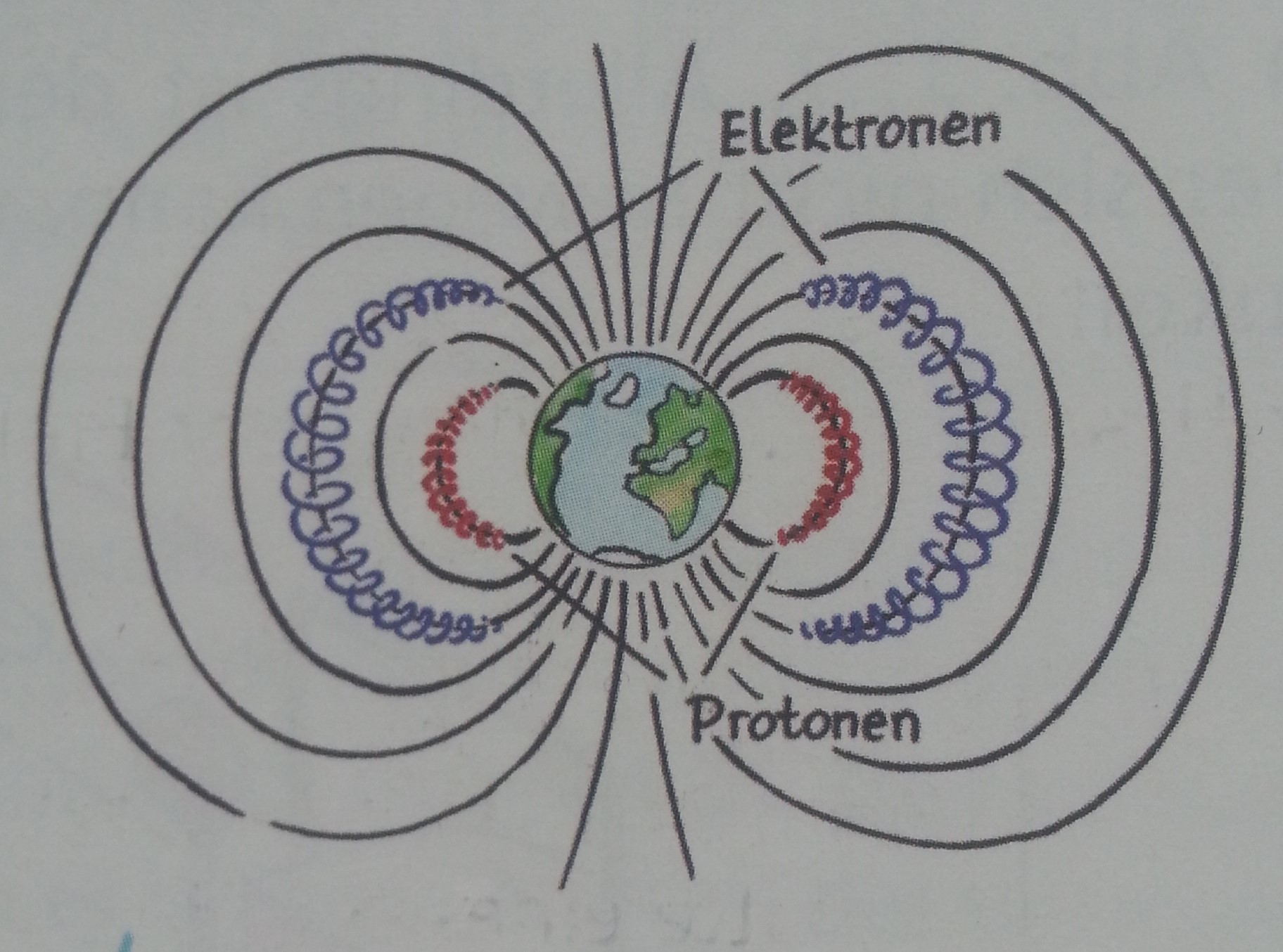 A charged particle follows a helical path in a uniform magnetic field. This is because the component of its velocity parallel to the field is unaffected, while the charged particle executes circular motion in the perpendicular direction.

The Earth's magnetic field is a natural magnetic mirror. The magnetic field gets stronger nearer to the poles, and the charges follow a helical trajectory along the field lines. The field lines "bunch" together, causing a component of the force that negates the velocity along the axis of the helix. This causes the particle to bounce back when nearing a region of strong magnetic fields.

This is exactly what happens in the Van Allen belts: the charged particles bounce back and forth between regions near the north and south (magnetic) poles, following the magnetic field lines in a helical motion. Such motion is also the reason for the Aurora appearing closer to the poles.

To get a rough understanding of the distribution of protons and electrons, note that they have the same charge (up to a sign), but the mass of a proton is much larger (by $\sim 1836$) than that of an electron. It would take a much larger magnetic field i.e. that found at lower altitudes, to "bind" a proton to a small radius of the helical path, than for an electron of comparable speeds.

In addition to this, however, there also seem to be other effects preventing high energy electrons from coming in to lower altitudes. Overall, the dynamics of the Van Allen belts are rather complicated and is an active field of research.

As for your first question, there are protons and electrons in both places (and to varying degrees everywhere in the ionosphere), they've just chosen to illustrate them in different places so you can see them clearly. Such a large separation of positive and negative charge would cause a massive electric field which would eventually rectify that separation.

As for the "bouncing pole to pole", this is largely due to the fact that as the charge spirals along magnetic field lines (see this article for the reason for the helical motion), it experiences a magnetic field with increasing strength (see how the field lines bunch together towards the poles - this is called a "magnetic dipole field"). That means in its frame of reference, an electric field exists pushing it back the way it came. This causes the particles to bounce back and forth, causing partial "confinement" of the plasma. The confinement times for plasma in the Earth's dipole magnetic field can be hours to multiple days depending on the altitude and other conditions.

A similar effect can be found in a simpler scenario called a "magnetic mirror".

Not the answer you're looking for? Browse other questions tagged solar-wind or ask your own question.

1
Why does a magnetic mirror reduce the velocity of particles moving towards the ends?