Why do balls in a spinning ellipsoid move to the minor axis plane?

There is a question concerning the Physics of a small child's tall that has been bothering me for some time now. I have investigated this to a small degree, but I have not been able to find a satisfactory answer and I believe the resulting answer must be of an elementary nature. 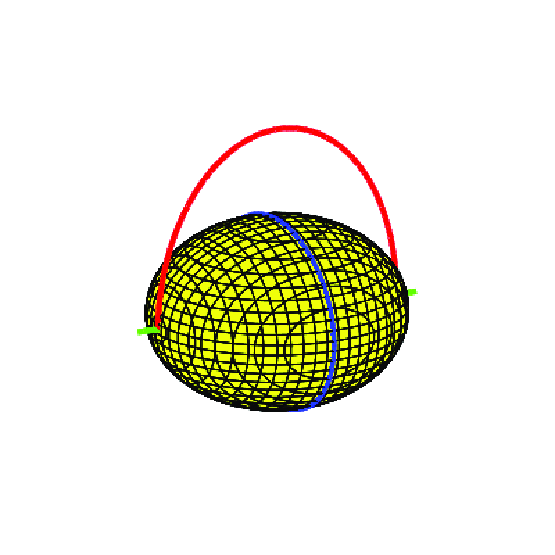 In the image, the red curve is a metal rod (elephant's arms) that keep the ellipsoid in suspension, the green line is the axis of revolution, and the blue curve is the curve that the small, plastic, balls move to (almost immediately) and rotate along as long as the speed is sufficiently fast enough.

It's not hard to see why the balls tend to rotate along the blue curve.

There are 3 forces on each of the rotating balls: the weight, the force due to the contact with the surface of the ellipsoid, and the friction. Friction is what makes the balls start and stop rotating, and it's tangential to the circle in which the balls are rotating. The weight makes things a tad more complicated, but it's not very relevant to your question.

The contact force (also called normal force) is the key here. It is always perpendicular to the surface, so if the ball is not rotating along the blue line, there will be a component of this force pointing towards the blue curve. See this diagram (I'm only showing the normal force):

The end result is that the blue curve is the only stable path for the balls.

Not the answer you're looking for? Browse other questions tagged classical-mechanics rotational-dynamics everyday-life or ask your own question.

4
Outcomes of earth slowing down spinning on its own axis
11
The gravitational potential of ellipsoid
2
Why do some objects tend to change their axis of rotation while rotating?
1
Why does the pen does not move straight?
2
Force at axis of spinning wheel
1
Spinning cricket balls and weight distribution
0
Spinning basketball on water surface--preferential axis
0
Why does the axis of spinning tops rotate about a vertical axis?
0
Why does the orbital period not depend on the semi-minor axis?