Reynolds number of airfoil in a pipe

As part of a physics high school paper I am writing, I need to build a wind tunnel. As part of my calculations, it appears that Reynolds number is very relevant in aerodynamics (specifically for comparing conditions). However, I've seen two separate equations for Reynolds number, based on whether it is air flowing in a pipe, or over a airfoil:

Further information - The pipe (wind tunnel) is 1m in length, and 100mm diameter, while the models range from 1cm through to 10cm

fluid-dynamics aerodynamics viscosity
Share
Improve this question
asked May 2 '15 at 6:53

The idea (theory) behind the selfsimilarity Parameters like Reynolds- or Machnumber is: that fundamental flow features of a specific flow have a dimensionless number connected to it (Dimensional homogeneity). This means: not the dimensional units (like inch, meters, tons, horsepower) should be used to describe (in this case) flow but dimensionless numbers. Numerous experiments have shown that irrespective of size or speed, as long as similarity parameters are kept constant, the results (dimensionless) can be compared.

The following figure (from Kazi et al. shows (dimensionless) heat-transfer over (dimensionless) flow velocity. The (linear) correlation between heat transfer (Nu) and flow rate (Re) is easily seen. And this correlation does only little vary over pipe diameter. 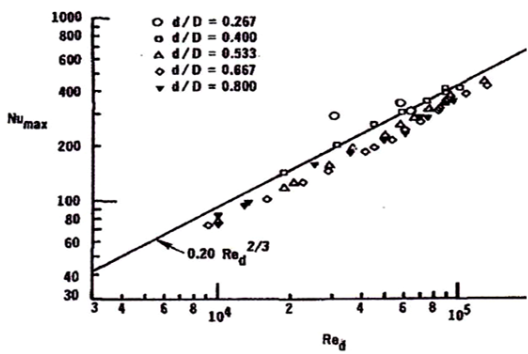 In this/your case (Navier-Stokes) applying the Buckingham PI Theorem the dimensional analysis will give you something like: There are two dimensionless numbers for your problem. One is connected to viscosity and one is connected to compressibility. In slow flows the Mach-number does not play a big role, but the Reynoldsnumber does. So assuming you are experimenting with low velocities (compared with the speed of sound) it is a good assumption to keep the Reynoldsnumber constant.

Now answering your question: The dimensional analysis will only give you a "scales" in terms of: A time-scale, a length-scale, a viscosity-scale. It will not provide you with the correct scale to use. It depends on the problem which length-scale is to be used mainly which length scale influences the flow the most. In some tricky cases you might need to find out on your own. In any case some engineering judgment might help to start looking in the right direction.

You might as well look at the whole problem the other way around. When selfsimilarity was first introduced in aerodynamics the experimentalists performed a large set of tests and then tried to find out which characteristic scales to use.

Why don't you perform a DOE. Use different airspeed, different model-sizes, and different ambient temperatures and figure out what the characteristic length scale is in your case?

From your explanation it seems the model has similar length scale to the wind-tunnel diameter. I would guess that you might not be able to use either the diameter nor the model length. It might be that you need to use a more generic length (maybe wetted surface divided by model length).

Finally, I would like to point out that dimensional analysis or selfsimilarity is not a law it only has proven to be very useful in a lot of engineering problems. There are also limitations to the applicability of those rules. The following figure (from Nickels et al.) shows that there is a strong correlation between the dimensionless distance parameter z and the dimensionless velocity fluctuation parameter u irrespective of dimensionless sensor size l. But for very small values of z this correlation breaks up. It is not of essence to your question why this happens. The point to be made is: There might be a set of dimensionless numbers which describe your problem. However, the set of dimensionless numbers is unlikely to be true for all conditions, but will be limited to a certain regime. 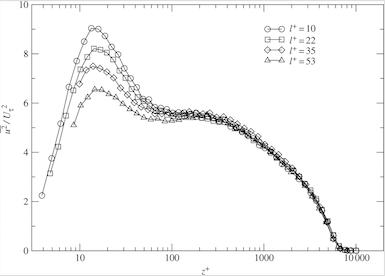 Not the answer you're looking for? Browse other questions tagged fluid-dynamics aerodynamics viscosity or ask your own question.

8
Why airplanes fly: the final truth
2
Does this make any sense? Ohms law applied to laminar liquid fluid flow in pipes
0
Reynolds number and characteristic length for a rectangular object in a pipe
3
Are any advanced Reynolds-averaged fluid models used in astrophysics?
1
Reynolds number in a wind tunnel
1
Laminar vs. Turbulent flow in a partially filled pipe
0
Question on Reynolds number using Newton's definition of inertial force and how to obtain the common expression for Reynolds number?