Lie derivative vs. covariant derivative in the context of Killing vectors

Let me start by saying that I understand the definitions of the Lie and covariant derivatives, and their fundamental differences (at least I think I do). However, when learning about Killing vectors I discovered I don't really have an intuitive understanding of the situations in which each one applies, and when to use one over the other.

But of course that cannot be it, since in general relativity we use the Levi-Civita connection and so $\nabla g = 0$. It would seem that $\mathcal{L}_\xi\, g = 0$ is be the only way to say that the directional derivative of $g$ vanishes. Why is this? If I didn't know that $\nabla g = 0$, would there be any way for me to intuitively guess that "$g$ doesn't change in the direction of $\xi$" should be expressed with the Lie derivative? Also, the Lie derivative is not just a directional derivative since the vector $\xi$ gets differentiated too. Is this of any consequence here?

As an example, consider the upper half plane model of the hyperbolic plane. Its metric is $y^{-2}(dx^2 + dy^2)$, so clearly $\partial_x$ is a Killing vector field; its flow, horizontal translation, is an isometry. The fact that $\nabla_{\partial_x}g = 0$ doesn't say anything about $g$, but it does say that Euclidean parallel transport is compatible with this directional derivative of the connection.

Now consider $\partial_y$. This of course is not a Killing vector field, since vertical translation is not an isometry. The connection however can be made such (by the theorem of Levi-Civita) that a pair of tangent vectors can be parallel transported in such a way that the inner product is preserved.

I think I have a more illustrative example: consider the sphere embedded in $\Bbb R^3$. Pick an axis and take the velocity vector field $\xi$ associated to rotation around the axis at some constant angular velocity. Also consider a second vector field $\zeta$ that is everywhere (in a neighbourhood of the equator, extend in any smooth way toward the poles) proportional to $\xi$, but that has constant velocity everywhere, something like in this image 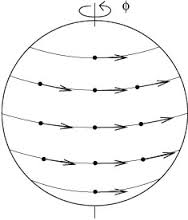 (downloaded from this page).

The key concept with a covariant derivative $\nabla_\xi = \xi^a\nabla_a$ is parallel transport. It is defined so that as you move along a geodesic in the direction of $\xi^a$, the inner products between parallel transported vectors are preserved. This inner product necessarily involves the metric (it is basically what the metric is for), so the covariant derivative is also necessarily metric-dependent. In order for this definition to make sense, it is also important that the metric is parallel transported in all directions, which leads to the defining condition which you are probably well-aware of, $\nabla_a g_{bc}=0$.

Parallel transport is a very specific notion that depends on the connection you choose. In fact one can conceivably choose a connection in which parallel transport doesn't have the geometrical interpretation as 'geometry transported along a curve'. In that case, all that the covariant derivative measures is 'how different $T$ is from some other arbitrary tensor $S$, where $S$ is a tensor that is parallel transported.

On the other hand, as you well know, the Lie derivative does not have such silly dependence on your connection. By definition it measures change of the tensor along a integral curve of $V$, always.

The notion of derivative requires a notion of comparison. In a general manifold, tangent vectors at different points belong to totally different vector spaces (see footnote 1), so we must define a way of mapping one tangent vector to another tangent space that we shall take, by definition to be the the "invariant image" of the vector in the new tangent space so that we can compare its image under other transformations with this invariant image for the purposes of calculating a "derivative" through the appropriate limiting process(see footnote 2). This is not exactly like the elementary - and co-ordinate dependent - notion of a derivative, so we make our definition so that our derivative is as much like the elementary one in its algebraic properties. The Liebnitz product rule is foremost amongst these, and both the Lie and covariant derivatives are derivations on the algebra of smooth vector fields on a manifold: they both fulfil Leibnitz's rule (see footnote 3) and both are co-ordinate free definitions.

A Lie derivative is the derivative of a vector field along the flow of a "benchmark" field, $\xi$ in your notation. It is as though a pioneering surveyor has mapped the manifold for you in advance by laying down a field which we use to compare all other fields to. Everything is measured by its relationship with $\xi$.

I say a bit more about Lie derivatives on my website: the discussion is about a quarter way through this page, around Figure 11.1:

In contrast, the covariant derivative does not need a "benchmark" field. Everything is defined in terms of the metric, which in physics is the "physical" thing - it defines what length measurements we as small creatures living in the manifold will make. It can be visualized thus: embed the manifold in a higher dimensional Euclidean (or Minkowskian) space through an isometric embedding (by Nash's theorem, this can always be done). Then calculate the tangent vectors in the higher usual derivative. The Levi-Civita covariant derivative (others are possible) of some vector along the direction of a tangent vector is the component of the "elementary" directional derivative (in the higher dimensional embedding space) of the vector that is tangential to the manifold. We throw away the normal component as being owing to the bending of the manifold itself, rather than owing to the "intrinsic" variation of the geometrical object we are trying to measure.

We can also define the covariant derivative without the higher dimensional space abstractly as a connection without the metric. There then two tensors which one defines abstracty to measure the deviation of a manifold from its fulfilling the Euclid parallel postulate, the curvature and the torsion. These are both nought in a neighborhood if and only if Euclid's parallel postulate holds throughout the neigborhood. It can be shown, on a Riemannian manifold, where one can define a metric, that there is a unique connection defined in this way that has a vanishing torsion, and all the noneuclidean behavior is thus encoded in the curvature.

Not the answer you're looking for? Browse other questions tagged differential-geometry metric-tensor differentiation vector-fields or ask your own question.