Is current in superconductors infinite? If they have 0 resistance then I (V/R) should be infinite? [duplicate]

I learned many years ago that according to Ohm's law, current is equal to voltage divided by resistance. Now if superconductors have zero resistance then the current should be infinite. Moreover the power should be zero too as $P=I^2R$.

In superconductors, current can pass without applied voltage. Since current is flowing so there is definitely some energy flowing in the wires but VIt=energy and V is zero so there is no energy ?

How to solve this discrepancy?

In a superconductor, the current can keep flowing "forever" since there is no resistance. But since conductors have inductance (in fact, superconductors are used most often to create magnets like for an MRI scanner), applying a voltage would not (immediately) cause an infinite current to flow.

It is instructive to see how an MRI magnet is "ramped" (turned on). From that link, I reproduce a circuit diagram here: 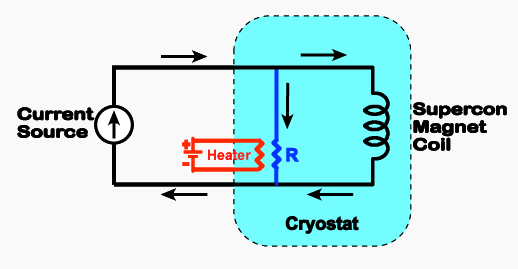 By turning on a very small (mW) heater, you can locally heat the superconducting loop so it becomes resistive. Now you can apply a voltage to the circuit - and it will preferentially send current around the superconducting part of the loop. The current will not be infinite though - for a given inductance $L$, the magnet will "ramp" as the current increases according to $$V = -L\frac{dI}{dt}$$.

When the desired field strength is reached, you turn off the heater - the loop will be closed and the current will keep flowing. At this point you turn off the voltage (current) supply. And you have a (strong) magnet that will persist for a very long time - as the current keeps flowing without resistance.

As was pointed out by J... And hexafraction in the comments, there is another important concept in superconductivity: that of a critical current. This is the largest current (density) that a particular superconductor can carry without becoming resistive. This is a function both of the magnetic field, and the temperature of the wire. This has a number of implications:

2) if you have a local imperfection in your wire, it might have a lower critical current and will therefore become the source of the transition to normal resistivity

4) because critical current goes down as magnetic field goes up, there is a non linear relationship between the magnetic field achieved and the amount of superconductor needed- one reason why higher field MRI systems are disproportionately more expensive.

5) sometimes a superconducting magnet will "quench" - local heat dissipation causes a runaway effect as more wire becomes resistive. You end up with all the stored magnetic energy being dissipated as heat. This will boil off the cryogen (usually liquid helium) which needs venting safely to the outside world (very expensive event!)

It is quite a complex subject...

The voltage is zero. That's the point.

The main way current gets started, like in an NMR magnet, is by inductive coupling.

If they have 0 resistance then I (V/R) should be infinite?

According to Ohm's law, the voltage and current associated with a conductor are proportional:

where the resistance $R$ is the constant of proportionality. This equation holds for an (ideal) ohmic material. We can rearrange this equation to be

except for the case that $R = 0$ since division by zero is undefined. In that case, we have that $V = 0$ for any value of $I$ (for physical superconductors, there is an upper limit on $I$).

Also, as you've noted, there is no power dissipated in the conductor when the resistance is zero.

Finally, as a commenter noted, there will be a voltage across when the current is changing since there is a magnetic field associated with the current and thus, an associated inductance.

The other answers all touch on this part of your question, but none of them explicitly says, that there is no energy dissipated in the superconductor itself.

@Jerry Schirmer is right, the best way to think of a superconductor is like a skier being able to ski at a constant speed without a slope. The power output is zero since no power is dissipated through any heating affects of the conductor so no energy is transferred except when resistance is met at the other end (like a bulb).

Not the answer you're looking for? Browse other questions tagged electromagnetism electric-circuits electrical-resistance superconductivity or ask your own question.

0
Quadrupling Power in a Circuit
2
How does Ohm's law apply to superconductors?
8
Why high voltage transmission lines?
0
Will current flow if Circuit contains a single cell?
0
Voltage drop across battery with internal resistance
2
Internal resistance and Instantaneous current?
1
How can current flow in a circuit if back emf is equal and opposite to applied voltage?
0
Voltage over current source and its short circuit wire
0
What will be the current in a zero resistance wire if apply some finite potential across it ends?