Light follows the shortest path, but to where?

I'm a high school student and I'm trying to understand why waves bend when they refract. I read a few answers on the site, and the explanation that they follow the shortest path makes sense enough to me, however that leaves an unanswered question, what point is the photon trying to reach?

Actually, the light beam does not follow the shortest path, but rather the faster path. Else the light would not bend but go straight there. This is Fermat’s principle.

what point is the photon trying to reach?

Good question. This point you are talking about, is in fact your eye.

A straw in a glass of water visually bends at the interface. 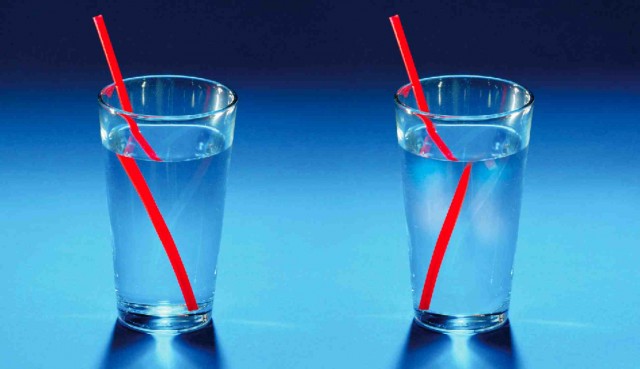 Schematically, this is a good illustration:

The way light behaves can be described as the most logical way to reach a destination faster. From this article:

Humans intuitively employ this rule, e.g., when a lifeguard has to infer the fastest way to traverse both beach and water to reach a swimmer in need.

I have heard a story, which I believe this article is investigating, about ants. When put in oil, which slows them down, they tend to follow not the straight, but the faster route, which always is a portion in the slower medium and a larger portion in the faster medium.

It seems that the actual question is why the refraction / bending of light actually happens, rather than which point the photon is trying to reach. To address that I will rather go with a wave explanation than a beam/photon explanation. At least, for me this is much more intuitive.

Think of light waves as water waves. The waves travel towards the beach. When they hit shallow water, they are slowed down:

Shallow water corresponds to a medium inwhich light is slow. I hope this has answered your further questions.

Not the answer you're looking for? Browse other questions tagged waves refraction or ask your own question.

1
Why does light bend towards the normal when passing through a denser medium?

2
Can there exist a Wave which changes the quantum states of particles?
6
Huygens' principle in EM waves
0
Feynman's superposition explanation of reflection/refraction, and 'tricking' quantum physics
7
Is reflection and refraction the same thing - bouncing of light?
19
Can low-frequency electromagnetic radiation be ionizing?
8
How does the Huygens–Fresnel principle apply to diffraction?
0
Why does the wavefront remain a line when light enters another medium?