How is $J^{PC}$ value experimentally determined for new types of particles?

How is $J^{PC}$ value experimentally determined for new types of particles?

For example, this paper says

What's a description of how it works suitable to advanced undergraduate students?

Here is a nice late-undergrad or early-grad-school lab report on the determination of spin states in nuclear decays. The references to that paper (from 1940 and 1950) are relatively accessible, too.

As your pullquote says, you get $J^{PC}$ from measuring angular correlations. If a particle at rest decays into two daughters, the angular correlation is trivial: the two daughters must go out back-to-back to conserve momentum. However if you have a more complicated decay, you can have correlations where some of the decay products tend to be emitted more parallel or more antiparallel than the others. Add in the fact that the odd-$L$ spherical harmonics have negative parity and you start being able to eliminate possibilities. For example, that's the original argument for thinking the proton and neutron each obey the exclusion principle.

We can talk through the logic in your paper:

That's as far as you can really get using only the types of particles emitted and the energies involved. The next step is to actually look at decay correlation angles. When the $X$ decays to a $\rho^0$ and $J/\psi$, the spins of those two pseudovector particles are correlated with each other, and the momenta are back-to-back in the rest frame of the $X$. When those particles decay into their pairs, the decay momenta are back-to-back in their rest frames; but because of the correlated spins the two pairs of second-generation decay products aren't in independent planes. An earlier paper considered more possible quantum numbers for the $X$, and included this better figure describing the decay angles: 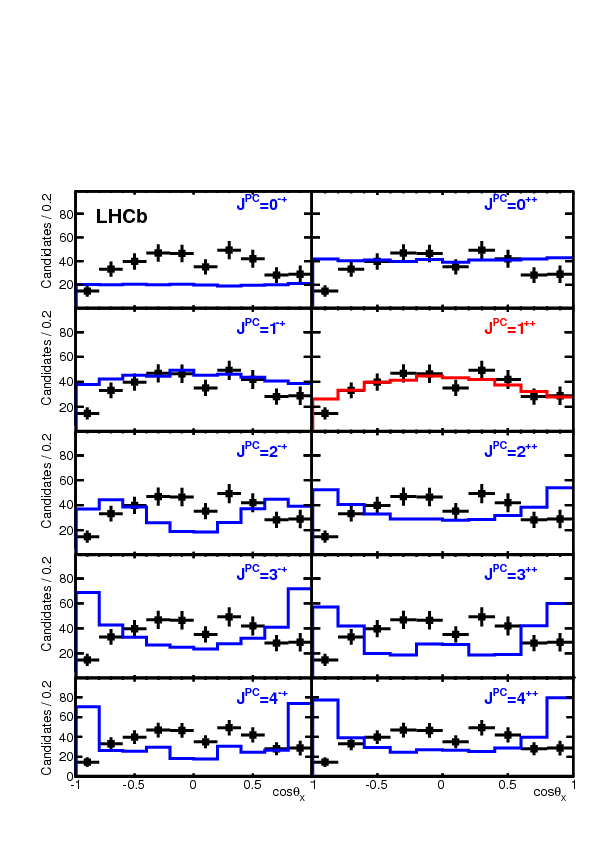 shows the number of events with a given $\theta_X$ and a smallish $\theta_\rho$. The data, black points with error bars, are the repeated identically in each subplot. The solid colored lines show the expected distributions of events for various internal values of $J^{PC}$. These predictions are probably based on elaborate Monte Carlo simulations, rather than first-principles calculations like the electromagnetic correlations functions in my first couple of links, but the idea is the same. You can see, for example, that the $J=0$ predictions have approximate spherical symmetry (uniform in $\cos\theta_X$), while the large-$J$ predictions are strongly peaked with the $J/\psi$ being emitted either parallel or antiparallel to the momentum of the $X$. One of those fits is not like the others, and so the spin is assigned.

Not the answer you're looking for? Browse other questions tagged particle-physics experimental-physics angular-momentum parity charge-conjugation or ask your own question.

1
What are the parity of particles?
1
What experiment(s) have or can refute the existence of an electron-particle “system” over the separate existence of a neutron within itself?

6
How are the masses of unstable elementary particles measured?
7
How does QM allow imaging of individual electron orbitals?
5
Why is the specific notation used for term symbols useful?
3
Particle physics: Why is J^P called spin parity if J is the total angular momentum?
1
What is the Current Status of Measurement of the Gravitational Mass of Antimatter?
1
Can free particle (eg. unbound electron or proton) have angular momentum other than spin?
1
How is the electron $g$-factor determined?