Let's say you wanted to write a differential equation for the forces acting on an orange sitting on the table (or any other object) using Newton's second law. Somehow you would have to add up all the forces acting on the orange. The orange isn't accelerating anywhere, so the net force acting on it must be $0$. How would you describe all of the forces acting on it (including their directions)? For example, lets say you have a force (of gravity) of $0.2N$, and a normal force of $0.2N$. You can't just add up these forces and say they equal a total of $0.4N$, because they are in opposite directions! Somehow, I would think, you would have to describe, matematically, the directions of these forces. How do you do this or is it even necessary at all?

It involves vector math. To add vectors, we must take into account their direction. 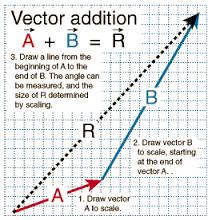 We can measure this line, but there is another way. Taking the line R, we can make it the hypotense of a right triangle. 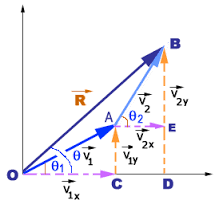 I'll put all that aside for a moment and ignore the fact that the orange is accelerating. Consider an orange sitting at rest on a table on a non-rotating rogue planet that is far from any massive object. It is still accelerating, but by such a tiny amount that one can safely ignore that tiny acceleration toward remote masses.

I'll assume a typical orange with a mass of 200 grams. I'll also assume gravitational acceleration on this rogue planet is 10 m/s2 (about 2% stronger than Earth standard gravity). Suppose we stick a needle that acts as a harpoon into the orange, and tie a string to the expose end of the needle. Nothing much happens if you pull up on that string with a force of one newton. Increase the force to 1.9999 newtons, and still nothing much happens.

Increase the force by a tiny, tiny bit to 2.0001 newtons and the orange lifts off the table.

You can see this in action when a large spacecraft takes off. There's an obvious delay (one second or more, depending on the rocket) between ignition and liftoff. It takes a little while for the engines to build up thrust from nothing to equal to the rocket's weight.

14
Why is a book on a table not an example of Newton's third law?
5
Fictitious forces confusion
2
Contact forces and the structure of matter
2
Adding forces acting at different points on a body
0
Newton's second law: direction of forces
16
Why is my understanding of unbalanced forces wrong?
1
A broader view on contact forces
0
How do we determine the forces present in the free body diagram of a system including multiple objects?
0
Ballistic Pendulum Forces Immediately After Collision