I have attached illustrative picture.

Sorry for triviality of the question - it's just it somehow doesn't make sense to me. Can anyone please help? 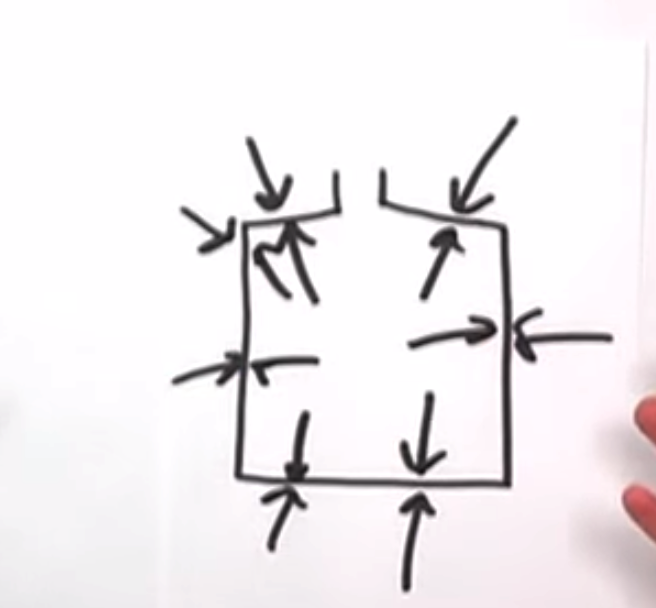 The walls of the structure, in this case .2m of polystyrene, are themselves solid and rigid. They provide pressure which fills up the space between the inside surface and the outside surface, effectively adding to the atmospheric pressure inside the cube.

However, if the thick walls of the cube were constructed of a hollow, evacuated non-rigid material, the structure very well might collapse, either from air pressure, the force of gravity, or both.

I am reading your question as wondering why the total force on the (smaller) inside surface area of the cube is not crushed by the (larger) outside surface area. Perhaps exaggerating this will make it a bit clearer. 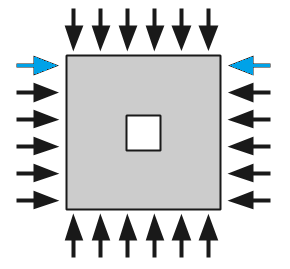 Yes the total force on the outside is larger, but much of that force does not reach the interior of the cube. If you imagine the force from part of the outside (between the highlighted arrows), this force never reaches the interior, so the interior does not have to resist it.

In fact, we can imagine cutting part of this off... 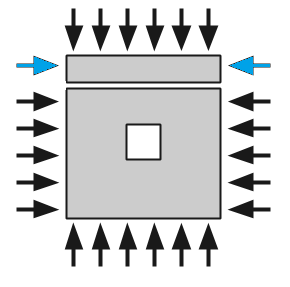 This reduces the outside pressure on the remaining cube, but has no affect on the pressure that the interior has to resist.

It looks like you don't take into account elastic forces in the rigid cube. The pressure on the cube's faces will tend to bend them inwards, the force will be passed to the ribs, so the faces and the ribs will get compressed, and they will resist compression. Perhaps it is easier to understand what happens if you consider an evacuated spherical shell, rather than a cube. External pressure will lead to much greater compressive stress in the spherical shell (in the direction tangential to the surface of the sphere), but the so-called modulus of elasticity of solid bodies can be extremely high and can provide resistance to the external pressure. If you consider a small segment of a spherical shell, the sum of the stresses at the periphery of the segment will be directed against the aggregate force of external pressure acting on the segment. The main mode of failure of a solid shell under external pressure is the so-called buckling (loss of stability) - it is similar to what happens when you squeeze an empty metal beer can. However, solid shells can resist external pressure to some extent. Let me summarize the above as follows. You haven't even started to calculate forces acting on a solid evacuated shell until the value of the modulus of elasticity appeared in your calculation.

Your drawing shows an empty box .

If it is at room temperature and not air tight the inside and outside air pressure are in equilibrium, the arrows balance against the rigidity of the wallss

If the box is air tight and the inside is a vacuum then it will be crushed. Nobody makes vacuum tubes from polysterine.

Why we can have vacuum tubes ( incuding light bulbs?) . It is because the rigidity of molecular structures for many materials is high enough to balance the force from pressure finally with the equal and opposite force of the ground .

Your diagram shows all of the forces acting on the box as a whole. These are balanced so the box remains stationary, but it doesn't tell you what happens to individual parts of the box.

Objects get distorted because the net force acting on individual parts of the box are different. Let's view the middle of the top of the box: 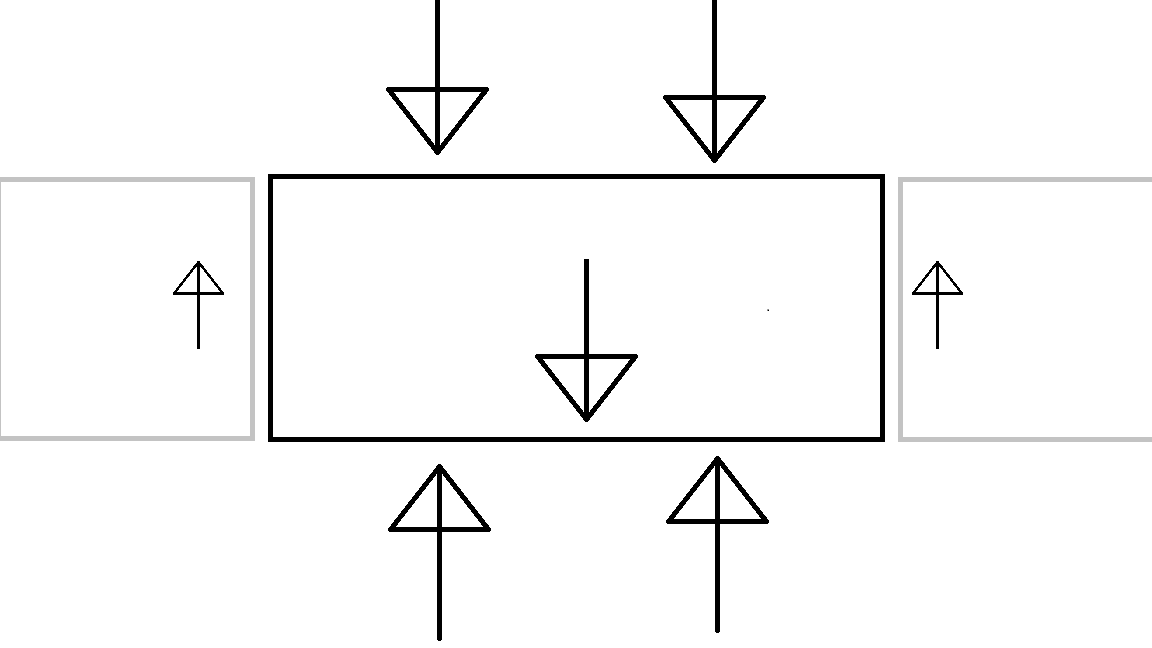 There is some distortion — e.g. the center of the box top is hanging slightly lower than the rest of the top which is why the net restoring force on the edges are both pointing upwards — but that is entirely due to the effects of gravity; we can see that the air pressure from the two sides cancel out entirely.

If we split the diagram further into the upper and lower halves, we would see that on the upper half the air pressure is opposed by the repelling force from the bottom half, and vice versa. The air pressure from the two sides compresses the material of the box (which is why the restoring force causes the top and bottom to repel).

In the specific case of cube there is no force difference being produced that would crush the walls.

Consider any macroscopic object consisting of parallel inner and outer walls exposed to the same pressure--there is an internal stress produced on the material of the wall from being compressed on both sides. This is countered by the normal force produced by the uncompressing atomic/molecular structure of the material. In case the walls are infinitisimlly thick the inner and outer forces simply cancel.

However the reason there is no net force difference in the case of cube is because the vector force calculated from the pressure has to be done locally i.e. the normal component of force at a differential area can be calculated from the pressure acting at that area--for the case of the cube this is exactly the same as the force acting on the entire area of that face which is same on either side. As to the different face inner and outer areas--the difference in area is not producing force on the inner wall--its producing a force all the way onto the opposite exterior wall (see @BowlOfRed's excellent diagrams) Hence there is in fact no net force acting on the wall.

This is not true in general if the wall has parallel surfaces with curvature--like sphere. In this case the inner and outer differential area elements are not same so even though the walls are exposed to the same pressure, the force produced isn't the same on the two sides. This leads to a stress gradient in the wall. The stress gradient then balances the net force difference.

Not the answer you're looking for? Browse other questions tagged newtonian-mechanics pressure air atmospheric-science or ask your own question.