What happens to a rotating rod that breaks in two?

I know that the approximation for the moment of inertia of an infinitely thin rod of mass $m$ and length $L$ spinning around an axis perpendicular to its own axis at its center is $\frac{mL^2}{3}$:

What happens when this rod is instantaneously broken in the middle with no loss or gain of energy? Rather than some external event triggering the breakage, imagine some sort of latch that held it together before, and now it is simply released. Easier to pretend with than an infinitely thin rod with mass, at any rate.

I'd like to know how I should determine the motion (absent gravity) of the two halves. Suppose I view the scene from directly above (viewing in the same the direction as the axis of rotation), the rod is rotating clockwise from that perspective (viewing from below, in the picture above), and the event occurs when the rod is vertically aligned from that view. Based on this I assume a coordinate system: The rod was rotating within the x-y plane with its center at the origin. The axis of rotation is the positive z axis. My camera is pointing in the positive z axis from some position $(0,0,-z)$.

The top half of the rod travels to the right. Its center of mass is at its middle point, which is at position $(0,\frac{L}{4},0)$ at $t=0$. The bottom half is going to travel to the left, in a symmetrical fashion.

What are their angular velocities? Do they spin faster or slower, or at the same speed as the original rod?

At this point I'm almost positive I can stumble my way to the solution for the split happening exactly at the middle. How might things change if the split is for example 1/10th of the way down the rod? Surely the little piece would go off much faster but would it spin at the same rate also?

Now...to deal with the seeming loss of angular momentum compute the angular momentum of each piece around their common center. If you've done it correctly you will now have the same total as before.

Sorry for being a bit late here.

What I find to be the magic part is: rotation of a body on an axis can always translated to rotation on a different axis + a linear motion.

Let's consider your case, viewed from above, before the split: 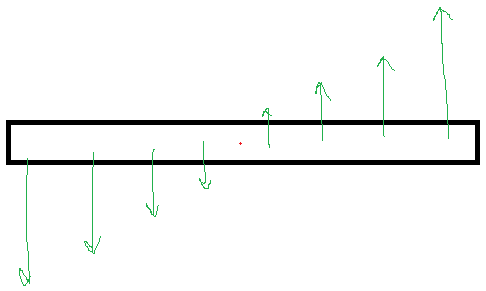 You can see the linear velocity vectors on multiple points as well as the CM. Now, after the split, the vectors are the same, but we have two bodies with their individual CMs: 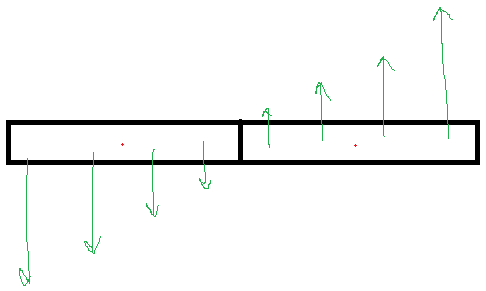 Let's focus on the right (your "top") half. We have now to translate that velocity distribution to a combination of rotation around the new CM plus a linear motion.

Let Ω be the rotation speed of the whole rod before split, ω be the rotation speed of the right half after the split, and V its linear velocity. The leftmost part of our right halfrod, which was a former CM, has zero velocity. Thus, the linear velocity is equal to the velocity due to rotation at that point, ie: V=ωL/4. We also know that on the left edge, the sum of these velocities equals toe previous rotational speed of the whole rod, ie: ΩL/2=V+ωL/4. Here is a schematic: 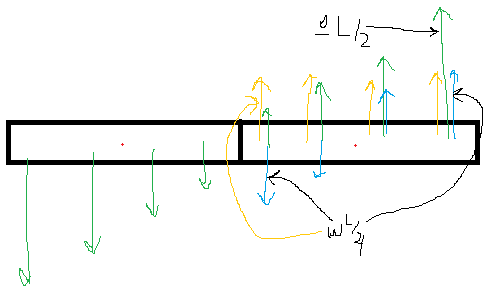 Solve this 2x2 system and you get:

So, it seems that each part will keep rotating with the same angular velocity, as well as have a linear velocity equal to the velocity (due to rotation) that the new CM had before the split. Awesomely symmetric.

Conservation of angular momentum and energy will have to be applied to the system, so you will have to consider the linear velocity to the calculations.

Not the answer you're looking for? Browse other questions tagged energy angular-momentum rotational-dynamics or ask your own question.

1
Double Compound Pendulum: why use inertia about the center of mass for bottom pendulum?
5
What is happening to rotational kinetic energy when moment of inertia is changed?
4
Angular momentum in a rod rotating around one end?
4
How can I find the angular and linear velocity of a 2D body that breaks into two bodies?
2
Rod hits rod - angular and linear momentum
14
Does a rotating rod have both translational and rotational kinetic energy?