Where did energy come from?

So it is my understanding that before the big bang there was a very small point that held all of the matter in the universe. My question is what form did energy of the universe take on when it was in this situation?

I don't think the point was moving, so not kinetic energy, and everything is together, so there is no gravitational energy either, but this is about the extent of my knowledge.

I have some theories about what form of energy it could take. Maybe all the energy was chemical energy, waiting to release energy when the atoms interact. Or is it an osmosis-like energy? Where the matter wants to move into the lower concentration of space from it's super high concentration (Is this even a type of energy, if of I would like to know what it's called). Or maybe was all the energy in the form of matter, later being released in a nuclear reaction.

Which, if any, of these theories is correct?

I am not a cosmologist but I can see a potential flaw in your trying to find an energy "cost" for making the big bang happen. As I am not a cosmologist, though, I can't say categorically that one can't make some consvervation notion meaningful, but from the classical standpoint we have this problem: over cosmological time and distance scales, the notion of energy as a fixed budget for supply of "stuff to make things happen with" breaks down, so you need to be careful.

In general solutions of the Einstein field equations (such as models of the Universe like the FLRW metric) there is in general no global notion of conservation of energy. Conservation of energy arises through Noether's theorem, which in turn only applies if we can find a symmetry of the solution called a timelike Killing vector field. As I understand it, most models of the Universe considered by cosmologists do not have these symmetries so globally energy is not conserved - including for the FLRW metric. So here we consider energy not so much as a "supply of stuff" but as an expression of symmetry, which the Universe has locally (over small space and times scales) but not globally. So you don't needfully have to answer the question of "where did the energy come from to make the Universe with" to have a Universe in keeping with known physical law: you only need to make it locally fulfill energy conservation.

As the comments to the questions state, this is a question on the research state about the generation of the universe, and the first moment is modeled in the Big Bang model. The real beginning point is not yet known even in this model since gravity has not been consistently quantized within the model, only effective theory is used. Nevertheless existing theories incorporated in the Big Bang can answer your speculations.

I have some theories about what form of energy it could take. Maybe all the energy was chemical energy, waiting to release energy when the atoms interact.

Not possible: Chemical energy is of the order of electron volts, and electromagnetic in form. The energy of the universe at the first 10^-32 seconds you can see the scale of energy versus time here: 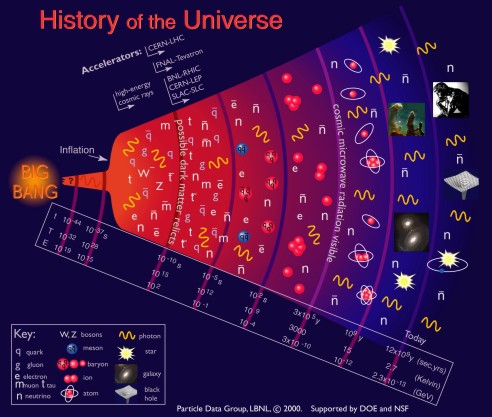 Or is it an osmosis-like energy? Where the matter wants to move into the lower concentration of space from it's super high concentration (Is this even a type of energy, if of I would like to know what it's called).

There does not exists such a classification

Or maybe was all the energy in the form of matter, later being released in a nuclear reaction.

Energy in the BB model is not in the form of masses at that time point, it is four vectors of virtual particles which carry varying energy and momentum, off mass shell as far as matter/mass is concerned.

Not the answer you're looking for? Browse other questions tagged cosmology energy-conservation universe space-expansion big-bang or ask your own question.

0
How to understand movement in expanding universe?
10
Is there a center of the Universe if the Universe is finite?
1
What determined the amount of energy and matter in big bang
6
When did the Universe turn from a quantum system to a multi-particle system?
1
Curvature in space time during Big Bang and present scenario
1
Right after the Big Bang, how did particles overcome extreme gravity and other forces and manage to fly apart?
4
Where did the CMB come from? What is due to the matter/antimatter annihilation? Or perhaps the radiation released when the electrons decoupled?