If you shine a light away from the center of a Schwarzchild black hole, will it stay still?

Light is travelling away from the absolute center of the Schwarzchild black hole (i.e. none of that spinning/stretching field) at $\ C $, and so shouldn't $\ \Delta C$ need to be greater than $\ C $ in order for the light to collapse into the black hole, therefore violating the relativistic limit of $\ C $? 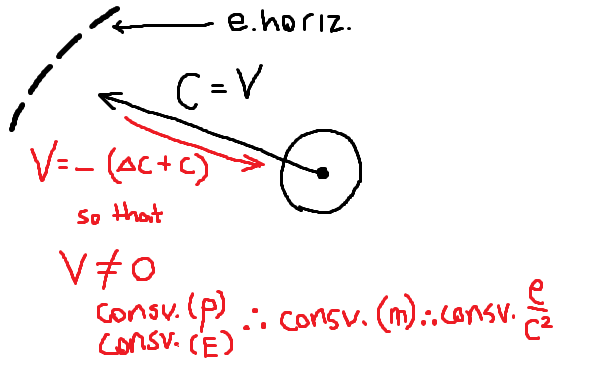 It seems like light would just 'hover' right in the center of a black hole then. Because if it goes away from it, the event horizon pulls it back, and if it goes into it, the velocity change must be greater than $\ C $ which violates general relativity; so technically there's no way for the light to move away, and so it would just be still.

It cannot be spinning in a constant orbit either, because that would require velocity in an outward angle. And it cannot move in an outwardly fashion, only in an inwardly one.

Is it spinning in an infinitely decaying spiral towards the center?

If so what happens to it if and when it reaches the direct and complete center, i.e. The case of it being 'shot' from the center.

If you shot light at an angle towards a black hole, but not directly to the center of it then that light from the outside will eventually become the same as the light that I said was shot from the center to the outside; because in both cases, they end up in an infinitely decaying spiral. 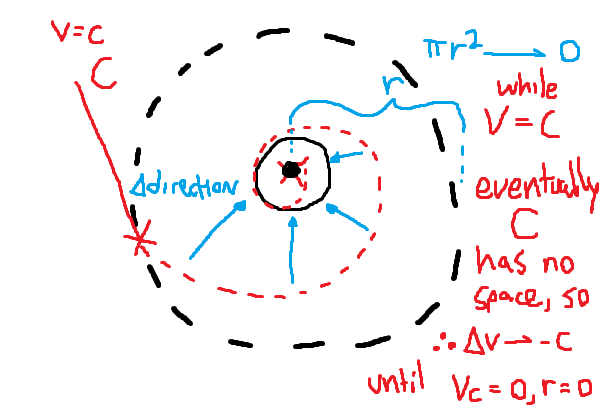 If so it would end up exactly like the light in the above paragraph, so then we need to figure out what happens to that light to figure this one out, or vice versa. 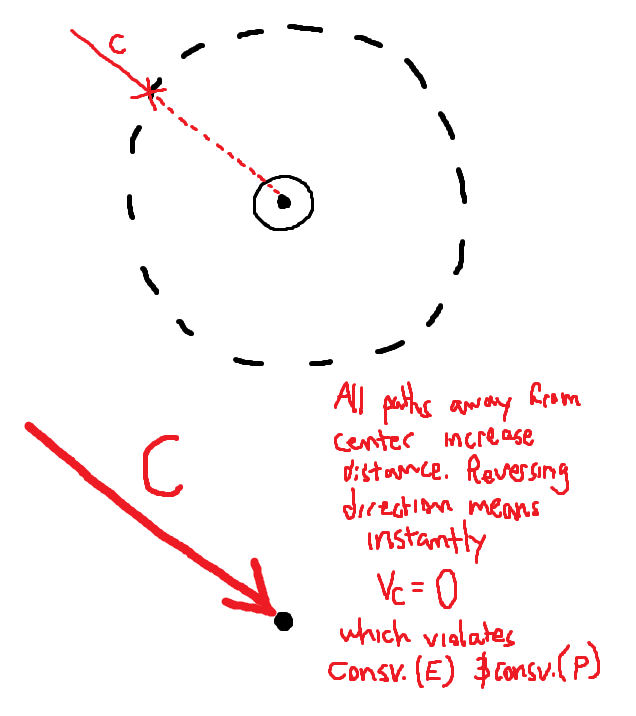 If so then it violates conservation laws. So I'm assuming this simply is not true.

Is the light travelling into a black hole somehow still travelling at the speed of light, in every direction possible where that direction keeps it facing towards the center?

If so, why is there not a point at which the only thing left for the light to do is stay still, since all other paths would increase the distance between it and the black hole's center, and therefore become Case A. And if there isn't, what would happen if there was?

Also, if it's a time and observation answer where it supposedly takes and infinite amount of time for C to hit the center, wouldn't it be the case that the black hole is 'eating' all of the available light in the universe and keeping it in stasis?

Also, what happens in a Kerr black hole then? Does it just rip the field of time/gravity at an angle such that the light would never get closer than the center?

The basic point is that you can't shine light away from the centre of a black hole once you are inside the event horizon.

Far away from the black hole, light cones are oriented so that propogating light from an event can travel anywhere inside a cone bounded by two lines at 45 degrees in a standard (Schwarzschild coordinates) space-time diagram.

Nearing the event horizon, this cone narrows to become infinitely narrow - this is a simple expression of the fact that according to an external observer, nothing can actually cross the event horizon.

As you get closer to the singularity, the light cones again become narrower; reflecting the fact that it will not be long before the singularity is encountered - even for a light beam.

Here is a picture of light cones at different radii (taken from Quinzacara et al. 2012) from the black hole centre. This shows how the light cones change as you pass inside the event horizon (which in this case is at $r=3$). 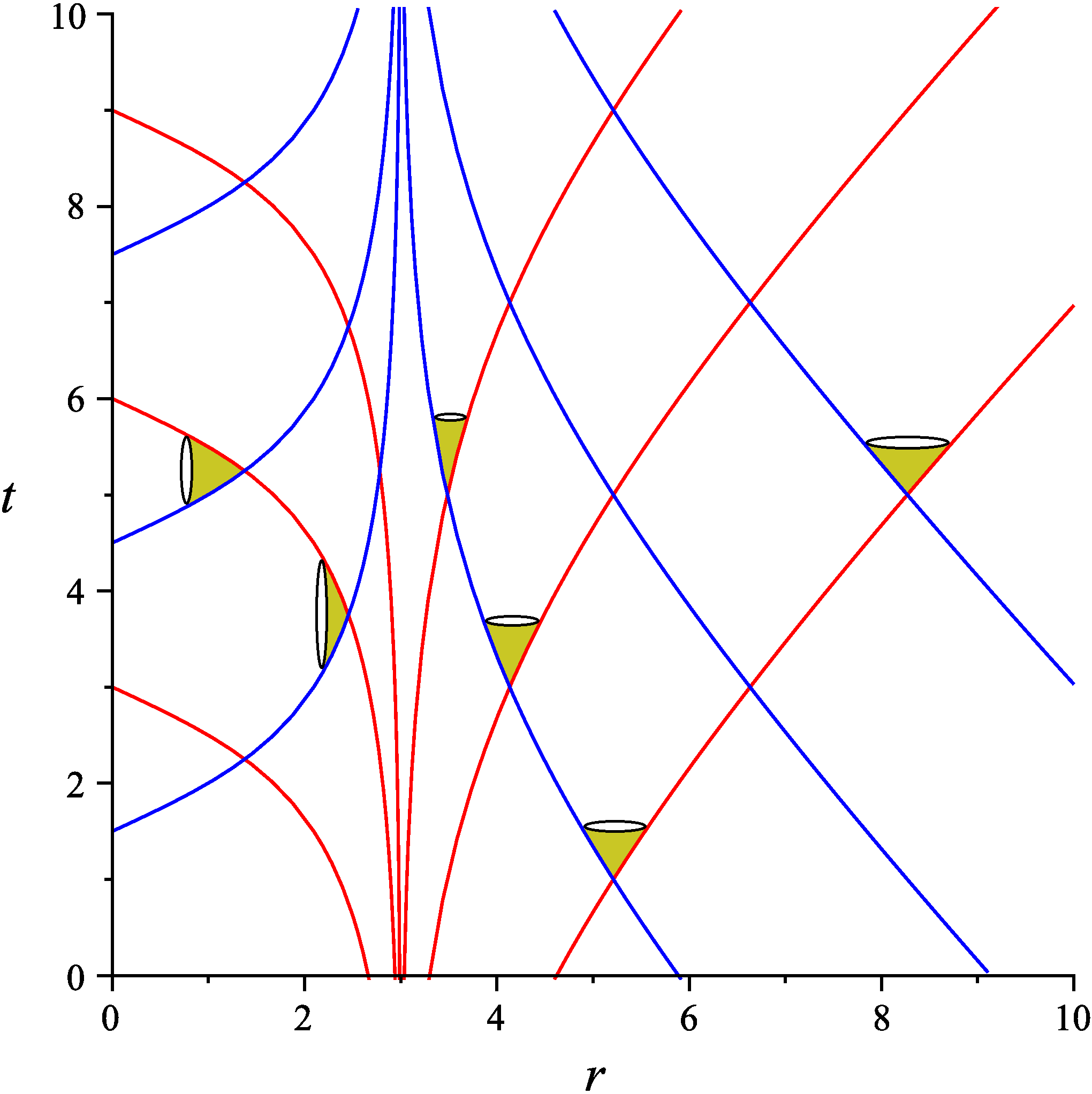 I'll add, because I agree with CuriousOne, that this of course is all theoretical (inside the event horizon) since no information to test these ideas can emerge (well, at least that part is testable...)

Actually the reference frame is falling at exactly the speed of light at the EH, and the closer you get to the center the faster it falls.

11
How will the super massive black hole affect our galaxy?
2
Information escape from a black hole
3
Light Deflection by a Black Hole
5
What happens to objects sucked into a black hole after the black hole evaporates away?
4
Do things move towards you or away from you in a black hole?
1
Photon Created Traveling "Directly Away" from center of BlackHole just inside and perpendicular to Schwarzchild Radius
0
At what radius from the center of a black hole is space infinitely warped?
5
Inside a black hole, can I see my reflection in a mirror (is the law of reflection still valid)?