How can the speed of sound increase with an increase in temperature?

I was reading a textbook. I found that it was mentioned the speed of sound increases with increase in temperature. But sound is a mechanical wave, and it travels faster when molecules are closer.

The speed of sound is given by:

where $P$ is the pressure and $\rho$ is the density of the gas. $\gamma$ is a constant called the adiabatic index. This equation was first devised by Newton and then modified by Laplace by introducing $\gamma$.

Suppose we keep the volume constant, in which case the pressure will rise as we heat the gas. That means in equation (1) $P$ increases while $\rho$ stays constant, so the speed of the sound goes up. The speed of sound is increasing because we're effectively making the gas stiffer.

And if we take a middle course and let the pressure and the volume increase then $P$ increases and $\rho$ decreases and again the speed of sound goes up.

So whatever we do, increasing the temperature increases the speed of sound, but it does it in different ways depending on how we let the gas expand as it's heated.

Just as a footnote, an ideal gas obeys the equation of state:

Substitute this into equation (1) and we get:

which is where we came in. However in this form the equation conceals what is really going on, hence your confusion.

Experimentally, the constant of proportionality for the above equation is approx. 20.

Great question. The short answer is that your intuition (about dense stuff having faster speeds of sound) is probably influenced by different materials at the same temperature and is tainted by solids, when the issue here is really about gasses, which are different.

Let's look at some data: 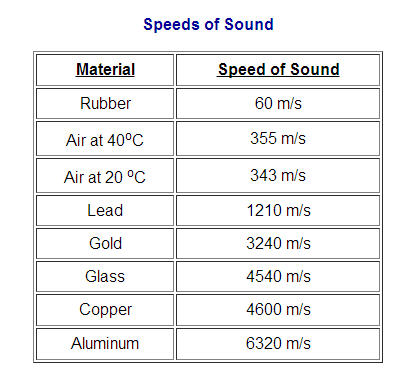 So your intuition is not too bad, right?

What about cold air vs. hot air? The cold air is denser, but has a lower speed of sound! Here is where we can see your lovely paradox.

It turns out that repulsion due to external compression waves (what you called mechanical waves) in a solid like a metal are created from different mechanisms than a compressible gas. A pressure wave in a solid will compress relatively stationary ions in a lattice. The lattice is very strong, and the atoms aren't moving, but they can vibrate. If you squeeze some steel, you are compressing this lattice a little, but the functional dependence of the electric fields in this lattice is rather complex. In regards to the question here, one hopefully obvious result is that the dependence upon temperature won't be too strong, since the force(distance) function determines how quickly a disturbance travels through the lattice and the energy you give to the atoms in the lattice won't change much the lattice-distance-force curve relationship of interest here.

A gas is a much different beast in that there are just a bunch of independent particles flying around. Here, the speed of sound is, basically, a weighted average of the faster gas molecules which of course move with the square root of the energy/temperature.

In comparison to a solid, the question of what is the speed of sound in a gas is totally trivial. Read this or this or to get an idea of how much more complex solids are. If I gave physicists just the atomic properties (not things like the bulk modulus) of a solid like copper and also of a gas like O$_\rm 2$, they would only be able to compute, at least with a simple calculator, the speed of sound in O$_\rm 2$.

A quick way to fix your intuition is to note the speed of sound in a solid at absolute zero vs. a gas. Only the latter is zero. Indeed, that's why gases can't exist near absolute zero. The molecules in a cold enough gas don't even have enough energy to get away from each other, so they have to be a liquid or solid instead.

Hopefully you now see that your past experiences really only applied for different materials, not for individual materials as a function of temperature.

However, as sound waves are compressional waves traveling through a compressible medium, their speed depends not just on inertia of the medium, but also on its elasticity.

Generally, the closer together molecules are, the faster they will carry sound waves. Although distance between molecules tends to increase when a medium is heated, this is relatively less important to the speed of sound within a given medium than is the faster movement of the molecules.

The higher temp. implies higher speed for the molecule, so it collide with the next molecule at a faster time even if they are far away from each. on the other hand, the lower temp. means lesser speed and so it can also collide with its close neighbor at a longer time. merci!

AshmitAshmit
1
$\endgroup$
Add a comment  |
Highly active question. Earn 10 reputation (not counting the association bonus) in order to answer this question. The reputation requirement helps protect this question from spam and non-answer activity.

Not the answer you're looking for? Browse other questions tagged temperature acoustics textbook-erratum or ask your own question.