What is the voltage of an average carpet static shock? Can you make it lethal?

I think I heard somewhere that it was in the thousands of volts, but it had extremely, extremely low amps. Could you somehow transform the current to make it larger or something? Or does the equation of volt*amp apply, making the overall power still merely an annoying sting?

The energy in a typical static charge from walking across a carpet is too low to kill a human. It may be a few milliJoules.

The energy available is approximately Voltage x Charge. The current that passes through your body depends on that voltage divided by the effective resistance of your body (including any clothing, shoes and other material in the discharge path). But the time this current flows is very small because the amount of charge is very small.

Since energy is a conserved quantity, there is nothing you can do with the available voltage or current that will make a more dangerous amount of energy available.

A hospital-type defibrillator provides capacitor-discharge with hundreds of joules per pulse. Carpet/doorknob sparks are quite a bit less:

Defibrillator designers say that the "danger zone" for producing fibrillation is in the range of joules or few tens of joules. Lower than that, and the impulses cannot trigger fibrillation in normal hearts. And far higher, instead we get "defib" or "cardioversion" effects where the pulse momentarily overrides the heart's natural pacemaker. Note that this applies to external defib, as with paddle electrodes applied to skin.

Can we make it lethal? Yes, just stab a piece of coathanger into your chest muscles, and apply the spark directly! ;) That's "internal defibrillation" using implanted electrodes. One of the early heart researchers managed to kill himself in just this way, by applying quite small pulses to his chest electrodes, but with pulses adjusted to be in the center of the phase/amplitude "lethal window" in his heart's QRS waveform. If you doorknob-zap an implanted chest electrode, probably you won't die the first time, but don't repeat the experiment over and over, because eventually you'll accidentally miss the lucky conditions.

The old trick with the VandeGraaff machine and the row of schoolkids holding hands is probably unwise. If the last kid in the chain happens to have a serious undiagnosed heart condition, the big zap from the stored charge is near the lower threshold of actually causing harm.

I think I heard somewhere that it was in the thousands of volts, but it had extremely, extremely low amps.

Electrostatic discharges from humans can be thousands of volts and several amps.

The reason it doesn't kill you is because it's a very small amount of electric charge, and so the discharge only lasts for a very short duration.

ESD tests with an intervening metal object are referred to as "hand/metal" tests. They are meant to represent the general case of a hand with any interposed metal object such as a ring, watch, bracelet, tool or key. The hand/metal discharge has become a de facto worst-case standard for ESD-testing of high-quality industrial and consumer equip­ment. Peak currents that result from it are typically an order of magnitude higher than discharge currents from a hand alone, without an intervening metal object.

Once again the ring [on finger] is at least as great a threat as an ESD electrode, as an 8 mm dia­meter ball tip. Peak currents at this 4 kV level range to 23A 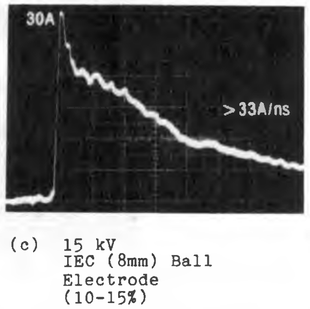 Here's another for comparison: 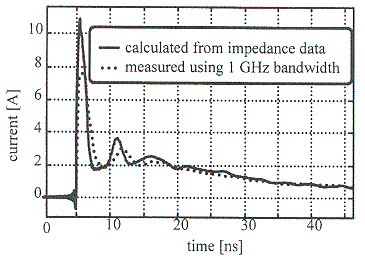 So if discharges from a finger are an order of magnitude lower, we can guess that they peak around 3 A. You can see that these peak currents only last a few nanoseconds, though.

(Yes, people intentionally shock themselves many times at thousands of volts for science.)

It must be mentioned that there are a lot of variables at play here.

The current (what actually kills people) is based on these, determined by Ohm's Law, which says $I = V / R$.

Although around $40,000V$ is usually enough to be fatal, it's also worth noting that while current is based on the voltage, humans have lived through being touched by absurd amounts of voltage and lived. The most recorded while still living, according to Guinness, was $340,000V$ given to Harry F. Mcgrew who came into direct contact with a transmission line. The usual static shock is around $500V$, maxing out around $21,000V$.

With that being said, from most sources I can find on Google, the general consensus says around $0.1-0.2A$ can kill a human. But I believe that it is only when there is a sustained current, though I can't find how long it needs to be sustained on average (I suppose they don't ever test it because we don't want people to die).

A relevant equation that may explain the need for a sustained current is $Q = I * T$, where charge is equal to the current multiplied by the time it's supplied. If $T$ (the time) is very small, as is the case with static shocks, the total charge is small, almost regardless of the voltage applied.

Using the data we have so far, in the case that it's most likely to kill someone is with a low resistance (perhaps it's a fit guy who is wet and the current doesn't go through much of the other person's body), we get $I = V / R = 21,000V / 2,300Ohms = 9.1A$, but this seems absurdly high. Also keep in mind that this is applied for a tiny amount of time, likely a fraction of a tenth of a second.

The real value may be somewhere between these two, but I bet it's more towards the second than the first.

Not the answer you're looking for? Browse other questions tagged electricity electric-current voltage or ask your own question.

58
Why do power lines buzz?
11
What causes an electric shock - Current or Voltage?
0
When do these equations apply in electrical circuits and when do they not?
1
When high voltage leads to low current in power transmission system how its not applicable for household voltages?
13
Watts vs. volts amperes
0
How fast does an electric shock pass through the human body?
38
Birds on a wire (again) - how is it that birds feel no current? They are just making a parallel circuit, no?