I am trying to prove Newton's Shell Theorem, and the natural integral I think of to use does not seem to give the right answer, so I am trying to find my mistake.

For simplicity, I will work in one dimension. Assume there is a uniform "sphere" of one dimension (ie, a segment) of mass $M$ and radius $R$ centered at $x = 0$, which exerts a gravitational force on a particle of mass $m$ located at $x = r$, where $r > R$.

According to Newton's Theorem, the gravitational force exerted by the sphere on the particle should be $G\dfrac{Mm}{r^2}$.

[Note: In 3 dimensions my integral becomes $$\int\int\int \dfrac{GMm}{\frac{4}{3}\pi R^3[(x-r)^2+y^2+z^2]}dV,$$ where the integration is over the sphere of radius $R$ centered at the origin and the particle is located at $(r,0,0)$. This too is incorrect, but the problem already arises in one dimension where the integral is far easier to evaluate.]

What you've proven is that the gravitational field along the axis of a uniform rod is in fact not proportional to $1/r^2$, and diverges as you approach the end of the rod. Both of these are true statements, so well done! But you seem confused about these answers, so I should probably elucidate a bit more.

The shell theorem (for spherically symmetric objects) can be viewed as a consequence of Gauss's Law for gravity. If you're familiar with the version from electrostatics, this works pretty much the same way: the flux integral of the gravitational acceleration field $\vec{g}$ over any surface is proportional to the amount of mass enclosed within that surface. In the case of a spherically symmetric mass distribution, one can draw an imaginary spherical surface surrounding it. By symmetry, $\vec{g}$ must be purely radial: $\vec{g} = - g(r) \hat{r}$. This means that we have $$ - 4 \pi r^2 g(r) = - 4 \pi G M $$ and so $g(r) = GM/r^2$, which is what you expect. But if you have a situation like a uniform rod of finite length, there's no way to do this: there's no analogue to the statement above that starts "By symmetry...". You simply can't get any further using Gauss's Law. Instead, what you find is that the gravitational acceleration is no longer uniform over the surface of a sphere; in fact, it can even diverge so long as its flux integral over the enclosing surface stays finite.

For Newton's shell theorem, it is advisable that you consider just that: shells. Consider that your solid sphere is composed of multiple thin spherical hollow layers or shells having a thickness $dr$ nested in each other. If you want to find force experienced by a point at P, any shell enclosing P can be neglected. This is because gravitational field inside a hollow sphere is 0. For the rest of the shells, an integration with respect to $r$ from $r = 0 \to r = R$ will suffice where $R$ is the radius of the solid sphere.

One must be able to integrate to prove the earlier statement about hollow spheres, but integrations to calculate gravitational field for hollow spheres are readily available on the net.

You need to draw yourself a diagram to get the correct mass of the "slice" in your expression, and get the correct distance. There are two problems with the way you defined your slice: although it is of constant width (in the x direction) $dx$, the distance is not simply $(x-r)$ because most of the material is off axis and thus further away (so you need a double integral); further, the mass of the slice is a function of the distance (the radial extent of the slice grows as you get closer to the center of the sphere). 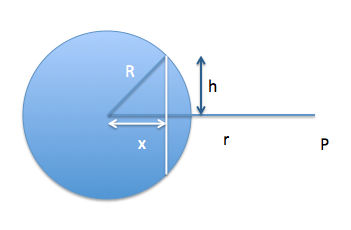 Writing the equations down in this way would be a terrible idea... but that is where you went wrong with your approach.

Of course the usual proof relies on things that others have proven before - such as that there is no net force on an object inside a spherical shell that is subject to the inverse square law. But you probably knew that.

Not the answer you're looking for? Browse other questions tagged homework-and-exercises newtonian-mechanics newtonian-gravity or ask your own question.