Why doesn't light, which travels faster than sound, produce a sonic boom?

I know that when an object exceeds the speed of sound ($340$ m/s) a sonic boom is produced.

A sonic boom is produced when a macroscopic object (say, roughly: larger than the average spacing between air molecules, $\approx 3\,\mathrm{nm}$) moves so fast that the air has no time to “get out of its way” in the usual way (linearly responding1 to a pressure buildup, which creates a normal sound wave that disperses rather quickly, more or less uniform in all directions). Instead, the air has to create a sharp shock wave then, which is two-dimensional and therefore can be heard much further.

Now, with small particles like light, this issue doesn't arise, because the air doesn't need to get out of the way in the first place: at least visible photons don't interact with air much at all, so they simply “fly past”. When there is an interaction, it pretty much means just a single air molecule is hit by a photon. This gives it a slight “knock” but nothing dramatic. And in particular, it doesn't happen simultaneously along a whole front, so there's no reason a shock wave would build up.

1Another way to look at this is if you consider the gas on a molecular level. The molecules have a lot of thermal movement – the average speed is in the same order of magnitude as the speed of sound. On this microscopic level, sound propagation is basically a “chain of messengers”: one molecule gets knocked to be slightly faster or slower than usual. This extra momentum information is carried on not so much by the sound-wave movement, but by the random thermal movements – in a “smooth” way. Therefore a slow-moving object, or a sufficiently small object (like an alpha particle) only causes normal sound waves. But it doesn't work like that if you hit the air on a whole front at faster than the speed of sound: in this case, the forward momentum you impart is larger than the usual thermal movement, and you get supersonic behaviour.

The answer is already in your own question: just because light is not an object.

Sound "is a vibration that propagates as a typically audible mechanical wave of pressure and displacement, through a medium such as air or water" and must propagate itself by compressing particles (atoms/ molecules). The sonic boom is, as you rightly say, sound produced by compression of air molecules by an object, and is also propagating through the air. In this animation is represented a:

..sound source traveling at 1.4 times the speed of sound (Mach 1.4). Since the source is moving faster than the sound waves it creates, it leads the advancing wavefront. The sound source will pass by a stationary observer before the observer hears the sound it creates.

the shock wave on the edge 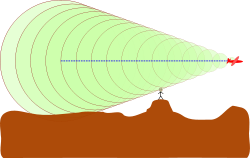 Light is an electromagnetic wave that propagates also in vacuum modifying electric and magnetic fields. These fields do not interact with air enough to compress them and produce sounds.

There are many differences between light and sound waves noted in other answers, such as the impossibility of any object with nonzero rest mass reaching lightspeed.

However, there is one likeness that I don't think has been noticed yet and that is the following: a sound wave travelling at the speed of sound does not make a sonic boom!

This is because the sound wave, like a light wave in the EM field, is simply the propagation of a fixed amount of energy. There is nothing "adding to" the sound - or light - wave as it travels.

In contrast, an aeroplane flying at the speed of sound is constantly adding energy to the propagating wave through drag mechanisms. That energy can't propagate faster than the object adding energy to the acoustic field, with the result that you get a bunching up of a great deal of acoustic energy in a narrow wavefront. The object is keeping up with the wavefront, continuously adding energy. If the wavefront can outrun the object, the energy gets spread out over a wide volume.

Exactly the same thing happens in the phenonemon of Cherenkov radiation where a particle is constantly adding to the electromagnetic field but the presence of dielectric matter means that the disturbance propagates at less than $c$, so we have the same situation of a body "keeping up" with the wavefront and continuously adding to the latter's energy. Cherenkov radiation indeed is an electromagnetic analogue of the sonic boom.

When comparing light waves and sound waves in this fashion, we need to consider what is waving.

In order for a sonic boom to happen, an object must move through air faster than the air-molecule-position wave can propagate, so the front edge of the wave builds up behind the object, moving at the speed of sound, with a very high intensity.

Even though light moves a million times faster than sound, its impact on the motions of air molecules is practically 0.

Not the answer you're looking for? Browse other questions tagged electromagnetism speed-of-light acoustics or ask your own question.