Why can rocks skip over water (stone skipping)? For instance, if you conduct an experiment where you drop both rocks from the same height, but give one considerable acceleration in the $x$-direction, one will fall in the water and the other won't. Why is that?

My attempt by dimension analysis

I assume that the force of water on the stone will rely on the surface area exposed to the water, the velocity of the rock on impact, the angle of attack, and density of the water. So if I multiply those together, unit wise I get the following.

These are Newtons so by dimensional analysis the equation for the force is... $$F_w=\mu \cdot \rho \cdot A \cdot v^2$$ where $\mu$ was added to add rigor to my argument. Factoring in gravity and adding some vector notation I get

If I integrate, I find that my method breaks down.

However, the acceleration from the water on the stone only lasts for a limited time, so I need the $t$ multiplying $F_w$ to start at $0$ and increase only for a limited amount of time.

So I'll define $\Delta t$ to be increasing from $0$ until some time c, then for all t after that $\Delta t$ will equal c.

I think that I neglected possible drag from movement along the surface of the water. I'd appreciate some feedback. Also, is creating the $\Delta t$ function appropriate?

In 1957 an article in Scientific American challenged readers to explain why skipping stones on water created different patterns of bounces. After 10,000 responses Kirston Koths submitted a high speed film which provided some clarity. In order to get a good skip the stone arrives fairly flat and stabilized by the spinning. It pushes up a bow wave over which the stone slides due to low friction of the fluid surface getting lofted again into the air. As long as the momentum and spin (which are reduced by the fluid drag at each interaction) are sufficient to break free of the drag the process repeats in smaller and smaller bounces until the stone finally is captured and sinks. This interaction is rather complex and so is difficult to model in the mathematical manner attempted.

This question can be answered two ways. Practically this is only a special case from this; Height of Water 'Splashing' and this; meteorite-like impact of a drop of yogurt problem.

The velocity is transferred to pressure as explained by Bernoulli. This Pressure is at maximum on a Stagnation point. At this point the pressure pushes the object back, the force vector is perpendicular against the surface. If the Object don't spin, it will flip because of this push at front edge. When the object is spinning it remains balance and sinks to the water with increasing pressure to the point where it has no vertical velocity left. Then these pressure forces pushes the object back so that it has again vertical velocity, but now it's upwards. The stone jumps up from the water.

The Smaller the hitting angle of the stone makes this area bigger providing more Energy to be returned on elastic collision.

There is also more aspects, like the shape, or hitting angle of the stone, doing work according to the Newtons impulse equation, better said in form of Euler's punp and Turbine equation.

This picture shows the vectors; the water support force, kinetic energy of stone coming and the energy after skip.

So, you need to have a flat stone, which has a small weight compared to the collision surface area, and it must be thrown in an angle (stone surface compared to water) which is optimally 2x (theoretical max, practical 1.8) the optimal angle of collision defined the weight/surface ratio.

If you "drop" a paper clip enough low, it doesnt only "skip" it floats. And this floating surely doesn't go according to Achimedes Principle.

The difference of these two priniciples? Scale; Newton's laws functions in macro scale, but Bernoulli explains it down to single particle level. Down to the QED, where electromagnetic forces propels each other. Elastic collision is the same velocity->pressure->velocity change as explained by Bernoulli. And the laws of pressure makes it easy to see why the vectors are written as in Newtons laws.

Stone has an angle of attack, so when stone moves in water, because water has inertia, and stone moves in order to make water move, so the pressure of water increases. When this pressure increases to a certain height, the water surface under the stone is equivalent to a slope (the slope of water). Because of the inertia of the stone, the stone moves upward along this slope. And finally out of the water. After leaving the water, there is no slope. Under the action of gravity, the stone will eventually fall back to the water. Therefore, after proper improvement, the lift formula of the wing can be used to describe the movement of rocks on the water surface. 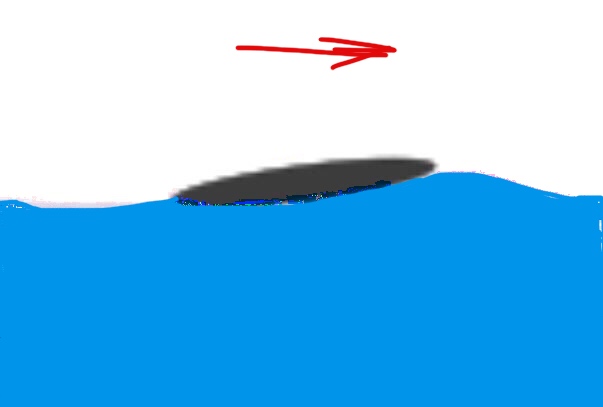 Not the answer you're looking for? Browse other questions tagged gravity fluid-dynamics collision aerodynamics or ask your own question.

4
Boussinesq approximation for the Navier Stokes' equation - discrepancy
8
Deriving shallow water equations from Euler's equations
4
Understanding equation for force acting on stones skipping over water
2
Does this make any sense? Ohms law applied to laminar liquid fluid flow in pipes
11
Equation of continuity for stones
0
Wind tunnel corrections for a finite wing
2
Modeling water flow between two tanks
0
What is the definition of velocity field of a fluid if not the velocity of the molecules of that fluid?