Why doesn't the evening/morning sun feel much hotter on your face?

I understand that places on the Earth's surface get hotter in summer, and in the middle of the day rather than morning or evening, because the surface of the Earth is presented 'face-on' to the Sun at those times, rather than at a slant. Simple trigonometry (or a simple drawing) shows that the same amount of radiation is spread over a smaller or larger area depending on the angle. (I learnt this in grade school, please correct me if I am wrong.)

Analogously, I find that, in the heat of the middle of the day with the sun overhead, I get sunburnt on the top of my head (I am bald), the top of my nose, or my shoulders, far more than any part of my body which is a 'vertical surface', such as my face.

However, in the evening or the morning, when the sun is low, I don't feel experience lots of heat and sunburn on body parts which are facing the sun directly. Why isn't the effect of the low sun on individual vertical surfaces just as strong as the effect of noonday sun on horizontal surfaces?

In general, the sun's light (particularly the UV that causes sunburn) has to pass through a lot more atmosphere (or a greater amount of air mass) in the morning and evening to get to a vertical surface than it does when it is at zenith to a horizontal surface.

An example is shown in the generalised image below (all graphs are obviously generalised): 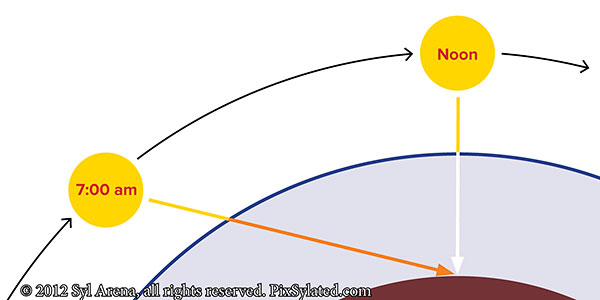 The caption from the source (The Daily Cycle of Sunlight: Part 1) is (the relevant statements are in bold):

As such, the solar radiation is absorbed and scattered more in the atmosphere in the morning or evening. The net effect can be shown on the following diagram:

Source: It's Coldest After Dawn

In terms of sunburn, the erthemal dose rate (related to UV radiation) follows the same pattern, as seen below: 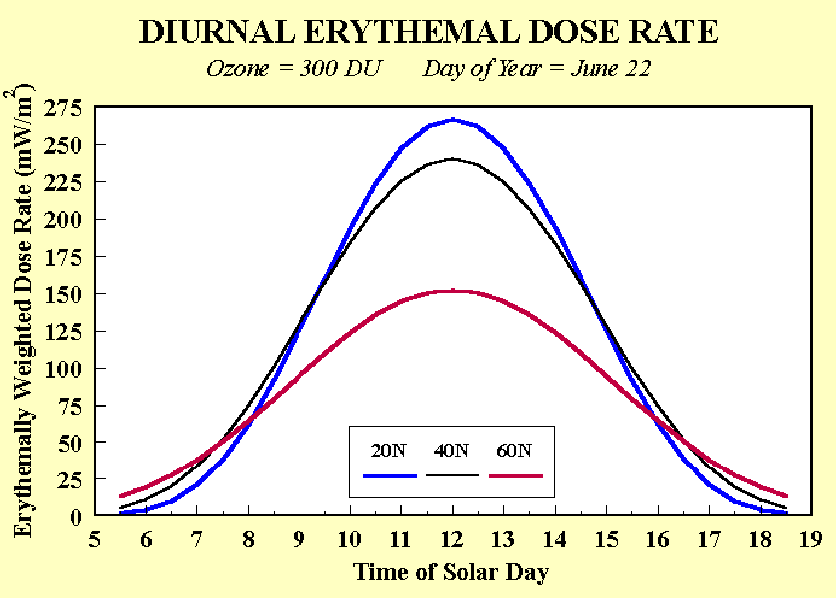 Image source: NOAA, where the define erythemal dose rate as

I dont think the Sun light has to travel more atmosphere and hence the mornings and evenings are less warm than noon. The sun light is falling in gross all over half of the earth which is facing the sun at the time of rotation in its axis. So if that is true all the area which is exposed to the Sun's rays has to be equally heated up and not only one longitude at a time. coz the dimension of earth is meager considering the radius of the exposure of the sun's radiation. A simple physical drawing from Sun's POV will show earth is a tiny object while Sun radiates all over around its area. So there must be some other reason for morning and evening to be colder and noon is warmer.

MumhukshuMumhukshu
9
$\endgroup$
1
Add a comment  |
Highly active question. Earn 10 reputation (not counting the association bonus) in order to answer this question. The reputation requirement helps protect this question from spam and non-answer activity.

Not the answer you're looking for? Browse other questions tagged energy radiation atmospheric-science or ask your own question.

3
If a hot Jupiter was not tidally locked, then are there any specific cases where its wind speeds would be milder than those found on Jupiter?
7
Why is getting a tan in the evening less likely than getting a tan in the morning?
0
Why is sunscreen more important in the middle of the day?
3
How much does temperature affect the time of sunrise?
2
Is there a difference between the red sky in the morning and in the evening?
0
Why doesn't the sunlight supersede the effects of the bodies of water and the ground on the temperature of the atmosphere?
2
Calculating heat loss to surroundings from a cube suspended in air?
0
Winds on gas giant planets: Would they increase if closer to their star?
13
What is different in the morning sunlight so it doesn't produce as much electricity as at noon?