Is it possible that neutrinos or some other sub-atomic particle contributes to radioactive decay?

For most radioactive nuclides, the half-life depends solely on nuclear properties and is essentially a constant. It is not affected by external factors such as temperature, pressure, chemical environment, or presence of a magnetic or electric field.

Have any experiments been done to test what effect neutrinos have on decay rates? From what I understand, it might be difficult to isolate pretty much anything from the constant bombardment of neutrinos from the sun and other sources. So, how can we be sure decay rates are not effected in some way by neutrino collisions/interactions?

Update "The overwhelming majority [of neutrinos in the beam] will continue on past the lab, to infinity."

This is from this article which describes how a beam is generated and detected at CERN. I need help understanding this: if the "overwhelming majority" of neutrinos cannot be stopped and the actual detection is considered an "event," we can't possibly say that we know what decay rates would be in isolation since we can only stop an extremely tiny fraction of neutrinos from a beam. Neutrinos are naturally and constantly coming from all directions at all times. The best we have is test results of what happens when we beam extra neutrons at those substances (which I'd be interested in seeing the results of).

There is such a thing as a neutrino initiated reaction and we can confidently calculate the rates for them. By that I mean that we can compute---accurately---the rate for stable particle to be transformed in a neutrino flux, and we can test those calculation with controllable sources (reactors and artificial beams).

Then we can take that---well tested---theory and compute the effect that the---well measured---neutrino fluxes around the Earth would have on other isotopes. This was the basis of Ray Davis' Homestake mine experiment which eventually earned him the Nobel Prize for standing by his experimental technique in the face of heavy theoretical criticism. For thirty years.

Long story short: radioactive decay is not caused by neutrinos, and we use a different vocabulary for those reaction that are so caused.

While reactions caused by interaction with neutrinos do occur (That's how we detect them), they are very, very rare. This is because neutrinos almost never interact with matter. While some reactions do occur due to neutrino impact, these are few and far between. When you compare the rates of decay for the elements to the amount of neutrinos they are likely to come in contact with during their half life (an extremely low number), you see that neutrino bombardment does not cause the decay. While the small amount energy added by the neutrino may be enough excite the atom enough to trigger fission, it is unlikely that this occurs, if only because of the fact that they don't get hit all that often.

TL;DR: While neutrinos may contribute an extremely small amount of fission to the overall amount that takes place in a sample, it is unlikely to happen, due to the fact that neutrinos don't interact with matter very much.

There is, however, a sub-atomic particle that is one of the largest contributors to radioactive decay-- the neutron.

{Disclaimer: I am merely a highschool student that enjoys learning about physics. None of this should be taken as fact without first researching, as there is a high probability I have been misinformed. Please point out anything that I said that was incorrect.}

In two comments you refer to a paper titled Evidence for Correlations Between Nuclear Decay Rates and Earth-Sun Distance by Jenkins, Fischbach, and collaborators. This is a deeply flawed paper: it's an analysis of other people's data which reveals a seasonal distribution in decay rates, but does a very poor job of accounting for other possible seasonal variations.

Despite its flaws, the Jenkins et al. paper motivated a laboratory experiment which compared the decay rate of a radioactive gold isotope when the gold was shaped into a sphere or a foil --- a difference which makes an enormous change in the self-induced neutrino flux in the gold. Suffice to say that there was no difference in the half-life of the two gold samples, which rules out any interpretation of the Jenkins et al. analysis in terms of known neutrino-matter interactions.

As others have answered: nuclear decay rates are affected by the neutrino environment, which is how we detect neutrinos. However the effect is terribly small, well understood, and not a major factor in ordinary decays.

Neutrinos interact with matter through the weak interaction. For the neutrino flux to have a measurable effect on decay rates, an enormous flux of neutrinos would be needed, not available from the sun. Consider that it takes years to gather some thousands of events from neutrinos of the sun in the neutrino experiments.

A mole of matter, radioactive or not, consists of $\sim10^{23}$ particles and it is evident that the neutrino-matter interactions are too weak to present a field that might affect decay rates, the way that in this link electric and magnetic fields do affect slightly decay rates.

The difference is that electromagnetism couples contributing with a strength of ($1/137$) to the cross section by each vertex, but weak interactions by $(10^{-6})$ as seen in this table: 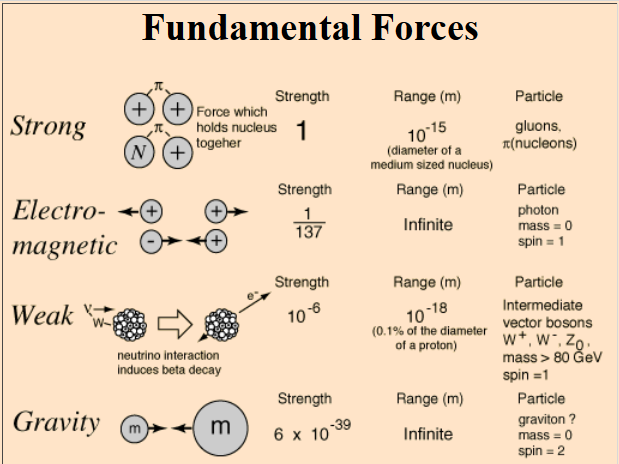 The existing neutrino experiments, together with the decay rates and interactions of weak interactions, are an experimental proof that neutrinos from the sun can be ignored as far as nuclear decays go.

Not the answer you're looking for? Browse other questions tagged particle-physics neutrinos or ask your own question.

1
Radioactive decay as pure radiation of neutrinos and antineutrinos?
0
Is it possible that cosmic ray particles and neutrinos account for a significant portion of dark matter?
9
Is it possible that all “spontaneous nuclear decay” is actually “slow neutrino” induced?
0
If an alpha particle is emitted during an alpha decay, why do some people call it radiation?
0
How are confinement and radioactive decay both possible?
0
Trapping particles in a laser beam (photophoretic trapping)