Edit: There are earlier posts regarding mirrors and votes to close on those grounds but I don't invoke mirrors of any kind in this OP.

My question is: Is it possible, (or is it already current practice in some solar arrays?) to combine these two methods, for increased efficiency in the capture of solar radiation?

This would involve using a photovoltaic solar cell array in a parabolic shaped configuration, with it's reflected radiation then being utilised to increase the temperature of a working fluid, (such as water, or whatever fluid is suitable for the temperature range involved), held within a "pipe" above the solar array.

If this is not feasible, is this because the overall efficiency of the proposed system in this OP is already comparable (or even inferior to) existing systems?

I appreciate that the fluid channel will block some of the solar radiation reaching the PV array and decrease it's efficiency because of both the shadow of the channel and the array of struts needed to hold the fluid channel in place.

This wiki article, from the comment below by sanchises PV Cells and Liquid cooling, is a variation on the above, and may/may not be more efficient than the proposal in this post.

Wikipedia has a good article on hybrid photovoltaic-thermal systems. As you proposed they consist of a solar cell with a thermal collector at the rear.

Solar energy conversion is a fascinating topic from a thermodynamic perspective and has been summarised beautifully by the work of De Vos, 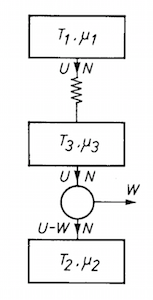 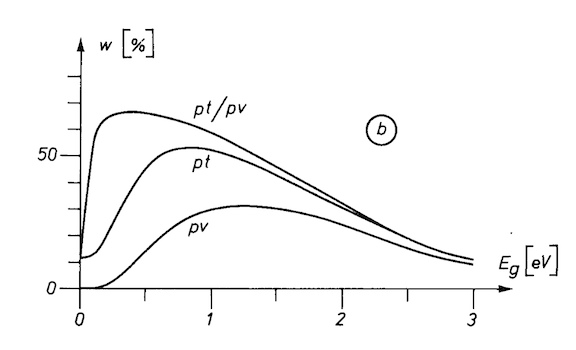 So quite a significant boost is possible with hybrid conversion. This calculation assume that the sunlight is not concentrated.

Now if we concentrated sunlight to maximum amount 42600$\times$. 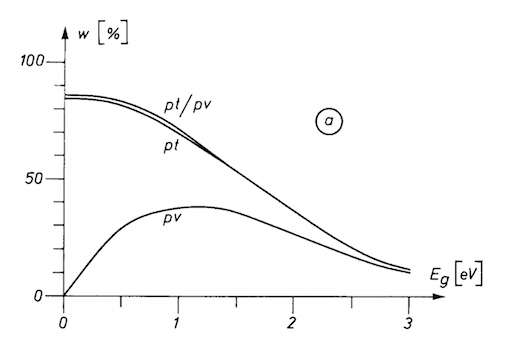 As concentration is increased the hybrid efficiency is boosted only slightly by the photovoltaic process. This is because of dramatic reduction in irreversibility as the concentration of sunlight is increased due to matching of the absorption and emission solid angles and also the much high temperatures that can be reached by the collector allow the Carnot energy to run very efficiently.

8
What kind of engine is a photovoltaic solar cell?
2
By what maximum amount can we concentrate sunlight?

0
This spinning solar cell advertises a 20x efficiency improvement. How?
0
Distributed Workload AS cooling?
63
Why don't solar panels contribute to global warming?
8
What kind of engine is a photovoltaic solar cell?
0
Temperature Profile of Flowing Fluid within a Pipe and the Temperature Profile of the Pipe Itself
1
Could metal rods conduct geothermal energy to the surface?