What does thermal conductivity actually measure?

Forgive my layman, non-physicist terminology used here. Hopefully I'm not too much of a caveman to express myself properly.

What does thermal conductivity actually express? Is it measuring the amount of heat that transfers through a material? Or the speed at which the heat transfers? Or some combination of the two? Or something else?

Edit: if thermal conductivity is the speed of heat transfer, what am I to make of the fact that dense materials like concrete and compressed earth blocks have a high thermal conductivity (≈1.5) relative to dedicated insulation materials (≈0.04), yet heat transfers through them slowly--this property being explicitly utilized in certain applications, in fact, such as passive solar design.

Thermal conductivity measures the speed at which heat energy travels through material.

That's different to the speed at which changes in temperature travel through material, which is driven by a combination of thermal conductivity and thermal mass.

That's why concrete and earth walls are used in some passive solar designs: not necessarily for their insulation properties, but for their properties as a heat buffer: they can absorb a lot of heat for relatively low changes in their own temperature, and radiate it back out again. That gives you a wall surface with a fairly steady radiant temperature, which feels a lot more comfortable than a surface with a highly variable radiant temperature; and it gives you a huge buffer that allows you to store solar energy in the day and release it at night, thus giving you cooling during the day when you need it, and heating during the night when you need it.

It represent the speed actually. it is defined as:

"The amount of energy that is transferred from A to B where $AB=1meter$ and difference between the temperature of point A and B is 1 kelvin, in each second."

for example the the thermal conductivity of wood is about 0.4 . it means if you have a wood with a length of 1 meter and and $\Delta(\theta)=1 degree$ (of both end of the wood) then 0.4 joules will be transferred in each second, from one end to another.

One of the best ways to explain concepts like this are to use labelled diagrams, such as 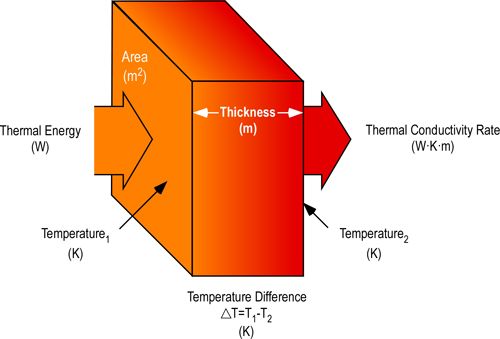 with a very nice explanation from the CBFT blog page, with a nice definition:

When the temperature of one surface of a solid material is higher than another, heat will move through the material. Depending on the characteristics of the material, this conductive heat transfer may be slow or it may occur quickly. The rate of heat transfer is defined by the coefficient of thermal conductivity.

Essentially, thermal conductivity is how fast will heat from its source pass through the material - if the material is thicker, then it will take more time to conduct through.

It's reciprocal is thermal resistance

(not a 'caveman' question at all!)

The reciprocal of thermal conductivity is thermal resistivity (from this source). In analogy to ohm resistance, where the resistance depends from both the current flow and the potential difference, you are right saying that it is showing "the amount of heat that transfers through a material" and "the speed at which the heat transfers".

Not the answer you're looking for?Browse other questions tagged thermal-conductivity or ask your own question.