Determining the refractive index of a foil

You have at your disposal:

Determine the refractive index of the material the blue foil is made of for the laser wavelength of light.

Note 2: The frame is not shut completely - it should not be pressed or opened. Make sure not to smear the surface of the panes.

There is no official solution available for this problem. How could it be solved?

I don't know the "official" answer but here is what I might try. I am hoping that others will contribute to make this a "good" answer.

First - we were not told whether the wavelength of the laser is transmitted at all by the blue foil; but since blue foil typically absorbs red light, and most laser pointers are red (I have a blue one but they are expensive!) I will assume we have no transmission.

That means we need to determine the answer with reflection. The Brewster angle may come to our rescue here. Since a laser beam is polarized, there is a certain angle for which we see no reflection from a surface when the polarization is in the plane containing the normal to the surface and the path of the beam. It should be fairly easy to set up the laser pointer at the Bragg angle (just look at the reflected spot and play around with both the angle of incidence, and the rotation of the laser pointer). Use the ruler to determine the angle (I assume you are allowed a calculator for this exercise - or trig tables, or a good slide rule. This was not specified. If not, then some origami on the graph paper will get you a pretty good goniometer...)

This will give us one data point: since the Brewster angle $\theta_B$ at the interface of materials with refractive index $n_1$ going to $n_2$ is given by

the refractive index $n_2$ of the slide glass is given by

Now comes the tricky part: we want to try to find the point of partial extinction of the second reflection - the one off the interface between the glass and the foil. 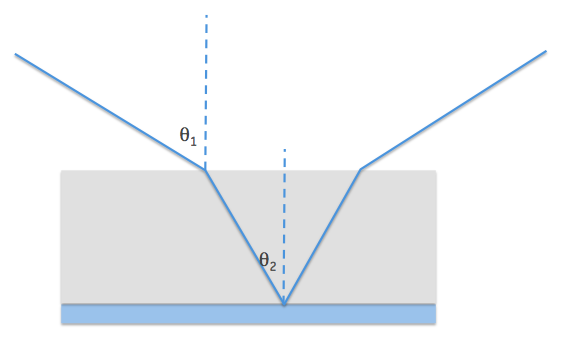 For this we want to carefully plot the intensity of the laser beam as a function of angle; I suspect we are looking for a secondary dip in the curve where the reflection from the back surface of the glass / foil interface is completely gone. This will happen when the internal angle ($\theta_2$ in my diagram) obeys the Brewster angle relationship.

We rewrite that relationship as

and we know from Snell's Law that

It is possible that there is a range of refractive index values for which there is no solution. Specifically, the angle $\theta_2$ is limited by Snell's Law to be less than $\sin^{-1}\frac{1}{n_g}$, so this approach will not work if

This answer is not guaranteed to be error free... I need to eat something and revisit this (hope there will be some constructive comments / edits in the meantime).

After reading Chris Mueller's answer, I decided to have another go and plot these curves for the reflected power given two different refractive indices, $n_1$ and $n_2$ (where there is a further $n_0=1$ for air).

Using the Fresnel equations we can compute the sum of reflected intensity for both the "front" and "back" reflections - assuming that the second reflection will in turn be partially reflected at the glass-air interface. There will be multiple internal reflections - each a small fraction of the previous one. There may also be reflections off the back of the foil; but as I said before I am going to assume that red laser pointer light is completely absorbed by the blue foil. The whole system now looks like this: 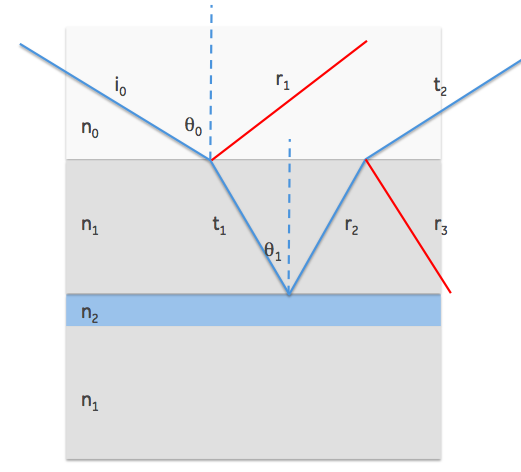 Then we have to use the following expressions a number of times (suffixes $s$ and $p$ represent polarization - either parallel to the surface, or perpendicular) - I am putting the incident intensity $i_0=1$ for simplicity (note - updated to show coefficients for intensity not amplitude with thanks to Rob Jeffries for pointing out my mistake):

Now the total reflected intensity is an infinite sum: if we put the coefficient of reflection at the first interface as $R_1$, the second as $R_2$, and the reflection on the inside of the glass-air interface as $R_3$, then we can write for the corresponding transmissions $T_1 = 1 - R_1, T_3 = 1 - R_3$ (we are assuming everything that is transmitted into the foil is absorbed). Then we have for the total reflected intensity:

This gets pretty messy pretty quickly - but that's why we all carry little supercomputers in our pockets these days...

I am going to assume that the laser is polarized and aligned per the above, so we can use just the expression for $R_s$; then something very interesting happens. At the Brewster angle, we will see a minimum in the reflectance - but it will not be zero, since the transmitted beam will undergo partial reflection at the interface between glass and foil. So while $R_1$ in the above expression would be 0, the other terms are not. In fact, it's quite easy to evaluate the expression for a range of refractive index values: and when you do this, you get the following plot: 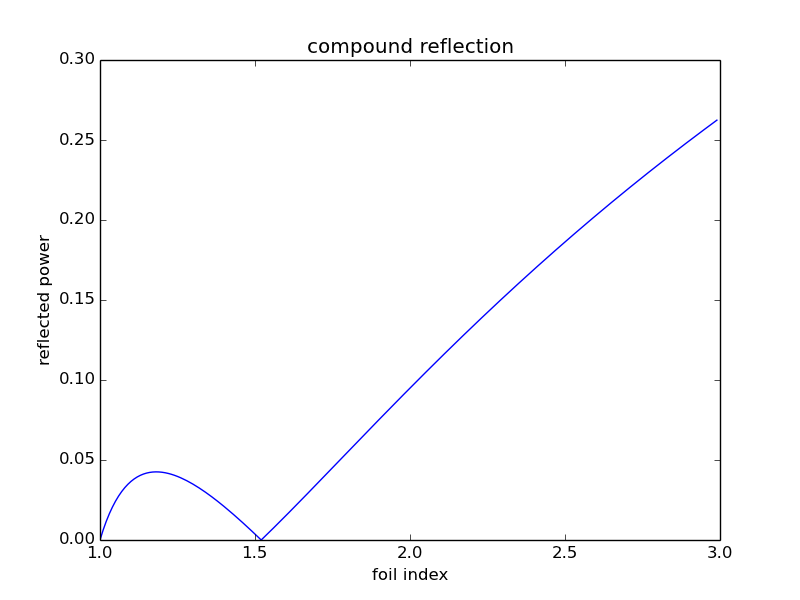 The Python code I used to generate this plot (note - this does not take account of the correction for the square-of-the-amplitude pointed out above so it will give the wrong quantitative result although it shows the null at the right place):

However, if $n_2 < n_1$, we have that funny curve to the left of the Brewster dip, which is not very helpful. I am still puzzling over how you would deal with that case.

Use your power meter and graph paper to map out the reflectivity as a function of angle. The Fresnel equations (plots shown below) are rather sensitive to the relative indices of refraction of the glass-foil interface. If the index of refraction of the foil is higher than the glass then you will hit a plateau above the critical angle at which all of the power will be reflected. If the index of refraction is smaller than the glass, then you should be able to identify the Brewster's angle dip in the reflectivity.

Not the answer you're looking for? Browse other questions tagged homework-and-exercises optics experimental-physics refraction or ask your own question.

3
Reflections in a glass of water
2
Can we have light through out the house with out light being switched on for all the time?
2
Focussing a laser beam through a sapphire substrate
1
Why is the angle of incidence shift in band rejection filter spectra minimized by high refractive index materials?
0
Difficulty in understanding an optics question
1
Are there optical materials with larger mean deviation with little to zero angular dispersion?