How can humidity change in a closed room?

I know a closed (not perfectly insulated) space (like a house) can change in temperature if the outside has a different temperature (by diffusion, unless I'm much mistaken). From observation and asking around I've gathered the same sort of thing can happen with humidity, and I don't fully understand how that happens:
Is the change only in relative humidity, caused by a change in temperature?
Is there a way for the actual water in the air to travel through the walls?
Or is there necessarily an opening in the wall of the enclosed space?
(With actual houses there is almost certainly an opening at least part of the time, but I'm wondering what the central cause is.)

A domestic humidity meter like this one currently sitting on my desk: 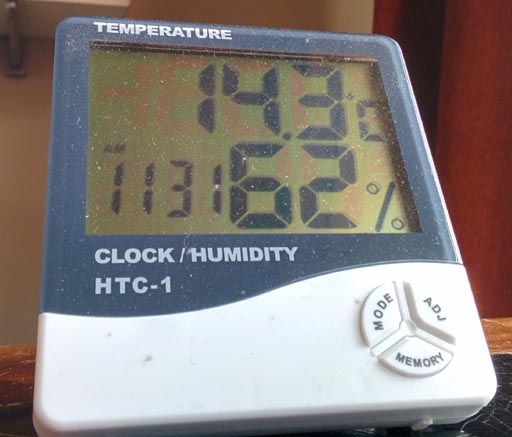 In my case this means that every morning when I turn the heating on I see the relative humidity fall as the room warms up. This change is obviously just related to the temperature because it's strongly correlated with me turning the heating on.

I do see longer term changes as the weather changes, but I've never attempted to measure the rate the humidity in my room changes when the weather outside changes. To do this I'd need to two humidity meters, one inside and one outside, with some form of long term data logging. It might be fun to do one day ...

Well there is a huge difference between these two things. As you mentioned temperature is the movement of atoms and describes, on average, how fast molecules and atoms are moving about. The movement can be transferred through any surface because it is energy! Though some objects might transfer heat very slowly, nonetheless the transfer occurs. Hence when you put a fast-moving atom object near a slow-moving atom the atoms bump into to each other and transfer this kinetic energy to each other, which we then sense as heat.

But as you said humidity is H2O molecules floating around in the air. So about your question:

A normal house (as you mentioned, not an insulated one) is a closed system if all the doors and windows and every hole in the wall (!) are sealed. Therefore it should not be possible for water to come into the "closed" house at all!

In general, however, our houses are not perfectly sealed. There are many openings between the doors and windows, and also we sometimes open windows too.

The thing is if a door is opened the transfer of water molecules will be very fast, because of the large difference between the density of H2O from outside to inside. so single opening of a door could transfer lots of moles of H2O in the room.

Not the answer you're looking for? Browse other questions tagged everyday-life humidity or ask your own question.

16
Why do I feel cold air in the shower?
6
Inside vs outside humidity
3
Frozen lake ice formation
0
Dependence of relative humidity on temperature and pressure
0
What does absolute humidity do in a large space with a temperature gradient?
2
Echoes and Pitch Change