Why dark matter and general relativity?

My knowledge on this subject is minimal, so sorry if my question is obvious. But why is the current consensus that there is something called dark matter rather than that our current theory of gravity (general relativity) is wrong?

The answers so far have given evidence for dark matter and general relativity. But (this may seem like a bit of strange thought) are we not doing the same as we did with the aether and the aether drag hypothesis? I.e. there is an observation that does not fit with general relativity what we are doing is assuming that general relativity is right and designing 'add on' theories [i.e. dark matter] to make all other observations fit GR. It seems to me that we are just holding onto general relativity because we are 'use to it'. It is like the saying we are 'looking for life as we know it', who says life can't be something completely different (rhetorical question)? This also goes back to Occam's razor, dark matter cannot be explained without making the whole thing more complicated. Another theory of gravity seems like the most simple approach.

Because General Relativity has an overwhelming amount of experimental evidence to support it. As a result, physicists look for dark matter, which works within GR, rather than to throw the baby out with the bath water, and thereby assume GR is wrong.

When Albert Einstein introduced the world to GR, he proposed three tests that would support GR. Please keep in mind that at the time, these predictions (except #1 below) had not been previously observed, nor could they have been explained with any previously existing physical theories.

Each of those tests has individual Wikipedia pages, linked to under the first link I included above. Additionally, there are a number of more modern tests of GR, not limited to just the three I described above.

The evidence for dark matter crops up in various places and on various scales - from the scale of fluctuations in the cosmic microwave background, to the formation of large scale structure in the Universe, through to the dynamics of galaxies in clusters (and gravitational lensing) and the dynamics of stars and gas within galaxies. Of critical importance are the relative estimates of the amount of "normal" and "non-baryonic" matter that come from complementary constraints supplied by big bang primordial nucleosynthesis versus constraints on the overall matter density from the cosmic microwave background. These indicate that most (5/6) of the gravitating matter in the universe is not "normal" and would be difficult to solve just by modifying our ideas about gravity.

There is a lot of agreement between these different lines of evidence, at quite different scales, for the existence of non-baryonic, cold dark matter, and in quantities that roughly agree with each other too.

An excellent, accessible primer on these topics is Garrett & Duda (2011).

I have approached your question from the point of view of why propose dark matter, rather than, could GR be wrong? As Sean points out, GR has passed a lot of observational tests and is currently a good theory. However, I believe the proponents of modified newtonian dynamics and their ilk, do not accept that it has been tested sufficiently to rule out changes in the regime of weak gravitational fields and small accelerations, but MOND struggles to explain dynamics on the scale of galaxy clusters.

The first evidence for dark matter does not depend on General Relativity but on Newtonian mechanics:

At large distances from the galactic centre the gravitational potential should be that produced by a central point mass and, in the absence of forces other than gravitation, it should be expected that GM/R2 = $ \theta^{2}_{}$/R (G, universal gravitation constant; M, galactic mass; R, galactocentric radius; $ \theta$, rotation velocity), therefore $ \theta$ $ \propto$ R-1/2, which is called, for obvious reasons, the Keplerian rotation curve. This Keplerian decline was not observed, but rather, flat rotation curves with $ \theta$=cte were obtained. Apparently, this has the direct implication that M $ \propto$ R, thus depending on the quality of the telescope used. The "Dark Matter" (DM) hypothesis interprets this result in the sense that the Keplerian regime holds at much greater distances than those at which we obtain observations. There should be great quantities of dark matter extending far beyond the visible matter in a more or less spherically symmetric DM halo. 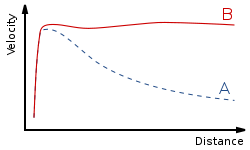 In the late 1960s and early 1970s, Vera Rubin at the Department of Terrestrial Magnetism at the Carnegie Institution of Washington was the first to both make robust measurements indicating the existence of dark matter and attribute them to dark matter. Rubin worked with a new sensitive spectrograph that could measure the velocity curve of edge-on spiral galaxies to a greater degree of accuracy than had ever before been achieved. Together with fellow staff-member Kent Ford, Rubin announced at a 1975 meeting of the American Astronomical Society the discovery that most stars in spiral galaxies orbit at roughly the same speed, which implied that the mass densities of the galaxies were uniform well beyond the regions containing most of the stars (the galactic bulge), a result independently found in 1978. An influential paper presented Rubin's results in 1980.[29] Rubin's observations and calculations showed that most galaxies must contain about six times as much “dark” mass as can be accounted for by the visible stars.

Dark matter signatures can be predicted and found in the cosmological model of the Big Bang which depends on General Relativity, but it is there also in simple newtonian mechanics.

Another theory of gravity seems like the most simple approach.

It will be a terribly complicated approach since newtonian physics in flat space has been supremely well validated.

Simple: people have tried to make modified gravity churn out the right numbers for all the observations we have, and nobody has managed to get results quite as good as General Relativity + Dark Matter produce.

Here's a quote from Modified Newtonian dynamics, one of the modified gravity theories:

MOND and its generalisations do not adequately account for observed properties of galaxy clusters, and no satisfactory cosmological model has been constructed from the theory.

The difficulty arises from how incredibly accurately GR predicts and explains various phenomena. It's not because everybody just believes that GR is perfect and so dark matter is the only possible way out, not at all. It's simply that no alternative comes anywhere close to churning out the correct numbers for all the observations we can make.

For what it's worth, relativistic generalizations of MOND appear to be getting pretty close to accounting for all the cosmological observations, but the Bullet Cluster observations may have put them all to rest:

A study in August 2006 reported an observation of a pair of colliding galaxy clusters, the Bullet Cluster, whose behavior, it was reported, was not compatible with any current modified gravity theories.

P.S. I'm not a physicist, just someone with a general interest in physics.

Not the answer you're looking for? Browse other questions tagged general-relativity gravity dark-matter modified-gravity or ask your own question.

50
Are modified theories of gravity credible?
7
Theory that gets rid of dark matter/energy
-3
Why is dark matter the best theory available to explain missing mass problems?
3
How do we know dark matter isn't curved spacetime?
4
Does dark matter indicate a problem with general relativity?
0
Isn't Dark Matter just an Indication that Relativity breaks down when describing large masses?

4
Do alternate theories for Dark Matter (like MOND) explain its effect on gravitational lensing?
1
Why is “dark matter” theory accepted? Why wasn't general relativity rejected?
5
Does Dark Matter Exert The Same Gravitational Force As Ordinary Matter?
4
Why do we study teleparallel gravity if it is equivalent to general relativity?
1
Can dark matter actually be gravitational radiation?
1
Do the Bullet Cluster remnants prove that dark matter consists out of particles?