The other day i was learning about interference patterns with the effect of a bubble making a rainbow on the surface. I learned that the reflections from both sides of the soap can interfere constructively or destructively to make color, depending on the thickness of the soap.

Another example would be a microscope slide making a circular pattern like the one below: 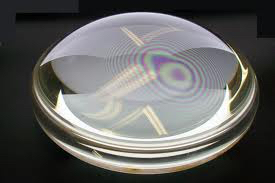 However, why don't things like windows do this? There is a boundary- the glass and air on both sides of it. Why is this different than the soap or the microscope slide?

Due to the Structure of Glass, No Interference.

To determine the thickness required to cause thin-film interference, both in light and in oil or soap bubbles, you rely on the following equations:

$$2n_{film}d_{film} \cos{\theta} = m\lambda$$ $$2n_{film}d_{film} \cos{\theta} = (m-\frac{1}{2})\lambda$$ These being the equations for constructive and destructive interference. According to the math, these films can have almost any thickness. As said in the comments, your reflecting medium needs to have a thickness comparable to the wavelength of light. This is not reflected in the equations above. Why?

The math above does not take into account the reality of material properties. In the real world, groups of atoms or molecules combine in materials to form crystals. If you cool a chunk of material quickly enough, the individual atoms or molecules form a solid in an unordered way; such an organization of material is called an amorphous structure. Glass is such a material that does not have long-range crystalline (amorphous) structure. Material Scientists call such a structure amorphous or glassy.

Glassy structures simply lack overall organization over long distances. Even though each section of glass will absorb or transmit light, the overall lack of structure prevents interference patters from being observed. These interference effects, if any, are negated by potential interference effects from other sections of the glass. The light ray also gets "jumbled" as it goes through this uneven material, making parts of it out of phase with the original beam, and thus harder to negate. So glass, on the small scale, does produce these effects, but they are negated by the effects of other sections of glass.

Thin layers of materials, even in glassy materials, will exhibit higher amounts of order. This order over a small region allows for interference effects to occur without the disorder of larger scales which destroys any interference pattern. This is a reason why films need to be as thin as possible; larger thicknesses introduce more chances to scatter the light and negate any desired interference pattern.

It is true that there are several boundaries on which light can reflect and refract on modern windows. They do reflect light, as you can see when looking from a bright room out into the dark night. What you do not see is the disorder of the air and glass, temporarily producing and then destroying the interference patterns.

Not the answer you're looking for? Browse other questions tagged electromagnetism optics visible-light waves interference or ask your own question.

5
Why is it difficult to differentiate between interference and diffraction?
8
How subjective laser speckle pattern is formed
0
Destructive and interference waves with different waves
1
The impact of refraction on a double slit interference pattern
2
Double Slit Experiment Temporal Behaviour
1
Elementary derivation for the minima of the interference pattern in the case of a thin wire without referring to the Babinet principle
2
Why do the LINES in a vertical soap bubble get thinner as we go down?