How to find the force due to fluid pressure over a surface? 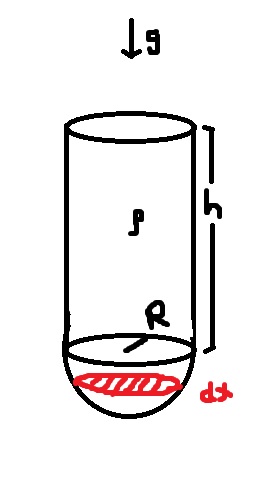 The cylinder is filled with fluid till the given height $h$, and the density of the fluid is $\rho$ and the system is static.I need to find the force due to pressure on the hemispherical portion at the base. I know that the pressure experienced by a ring of thickness, say, $dx$, if the area it contains is parallel to the top of the cylinder, will be equal throughout the ring. And also, the pressure in the hemispherical region changes from $\rho gh$ to $\rho g(h+r)$ (from the disk at the top to the infinitesimal one at the bottom).

(I've tried to find the Force by integrating $PdA$ over each ring, with their radii ranging from $R$ to $0$, and the pressure varying like I mentioned above, but that apparently is not the right way to do it.)

I guess the force due to pressure on the hemispherical portion at the base is equal to the weight of the fluid. You can just calculate the volume of the fluid and multiply by $\rho g$.

Not the answer you're looking for? Browse other questions tagged homework-and-exercises fluid-dynamics pressure fluid-statics or ask your own question.

0
Force due to pressure on side of box versus weight of fluid inside box
0
Find the pressure field inside a partially filled half sphere
0
Finding the net force exerted by water on a vessel wall
1
How to simply model fluid flow over heigtmap?
1
Why does the height of an object matter in a fluid?
1
The relationship between the pressure at the base of a container and the normal reaction on the container
0
Are collisions ignored while calculating fluid pressure?