Why does red light travel faster than blue light?

I know that light of all frequencies travel at the same speed in vacuum.

But I wonder why their speed differ in any other medium, why does red light travel faster if it has less energy than blue light?

The correct picture of an atom, which is given by the theory of wave mechanics, says that,so far as problems involving light are concerned, the electrons behave as though they were held by springs. So we shall suppose that the electrons have a linear restoring force which, together with their mass $m$, makes them behave like little oscillators, with a resonant frequency $\omega_0$. ...........The electric field of the light wave polarizes the molecules of the gas,producing oscillating dipole moments.The acceleration of the oscillating charges radiates new waves of the field.The new field,interfering with the old field,produces a changed field which is equivalent to a phase shift of the original wave.Because this phase shift is proportional to the thinkness of the material ,the effect is equivalent to having a different phase velocity in the material''.

Here is the Feynman's derivation

Jon Custer hinted at something, which I think is best explained via an analogy.

But I wonder why their speeds differ in any other medium?

Because the light interacts with the material, and those interactions are wavelength dependent.

And why Red light travels faster while it has less energy than blue light?

Because the light interacts with the material, and those interactions are wavelength dependent!

Most of the answers were helpful indeed but I thought it in a different way to say that Red light travels faster compared to blue light.

Think it as the example of a prism. 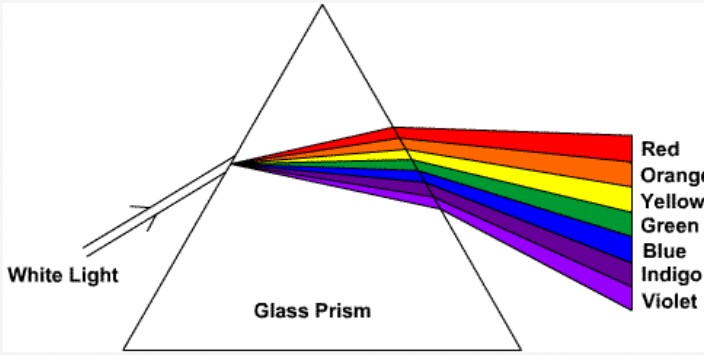 Now ask yourselves, How is deflection related to speed of an object? It's an inversely proportional relationship. From the prism, we can conclude that the red light must be traveling through a greater speed compared to blue light as it is deflected the least.

In material you have $\epsilon=\epsilon_r \epsilon_0$, $v^2 = \frac{1}{εμ}$, where $v$ is a phase velocity of the light. - see http://en.wikipedia.org/wiki/Permittivity, where is a also a picture of frequency dependence of $\epsilon$.

Not the answer you're looking for? Browse other questions tagged visible-light speed-of-light refraction or ask your own question.

5
Faster than light in plasma
1
How can light travel at a speed greater than the speed of light
21
Why does William Herschel's experiment show red light as warmer than blue?
24
How can muons travel faster than light through ice?
0
A question regarding the speed of light in a vacuum, specifically putting a 'color' in
16
Why are red and blue light refracted differently if they travel at the same speed in the same medium?