A ball of mass $m$, radius $r$ and a moment of inertia $I = \frac 25 mr^2$ is rolling on the floor without sliding with the linear velocity $v_0$. It hit the wall perpendicularly. Find out the velocity $v_k$ of the ball's receding from the wall after a long time after the collision. 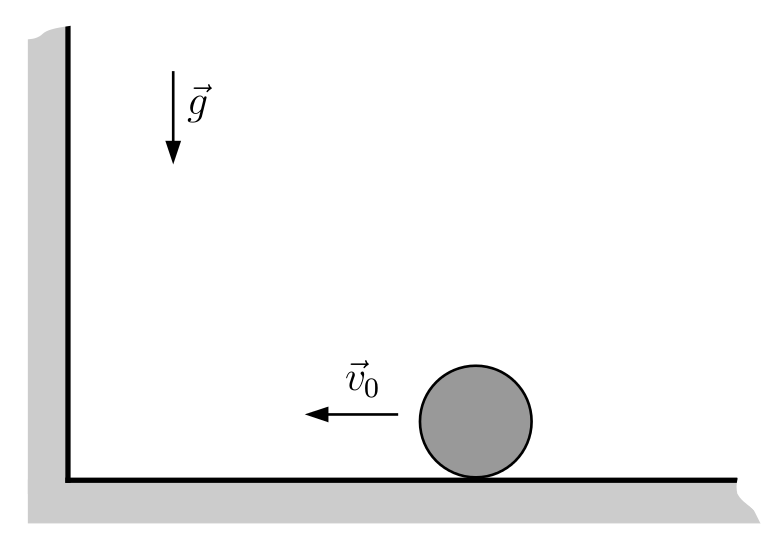 As the collision is very short, the forces acting between the wall and the ball are very big, so we may neglect the gravity, friction between the floor and the ball and the floor's reaction force. Then the angular momentum wrt to the axis of ball's tangency to the wall is conserved. This means $I' \omega' = \mathrm{const}$, where $I'$ is the moment of intertia of a ball wrt to that axis and $\omega'$ the angular velocity wrt to that axis.

But why is it equivalent to the condition that $I\omega + mv_yr = \mathrm{const}$ where $v_y$ is the vertical component of the velocity of the ball?

As the ball is rolling without sliding, it approaches the wall with linear velocity $v_0$ and angular $\omega_0$.

The collision of with the wall is very short, so the contact force and the reaction force are very big. This means that during the collision we may neglect the gravity, the reaction of the floor and the friction of the ball with the floor. In this situation the torques wrt to the axis of the ball's tangency to the wall equal 0. So the total angular momentum is conserved wrt to that axis $$I\omega + mv_y r = \mathrm{const} (1)$$

The wall and the ball are ideally elastic, the total work done by the reaction forces perpendicular to the wall equals zero, so the kinetic energy in the direction of $x$ is conserved, so $v_{2x} = - v_0$

After the collision the ball's motion is a projectile with initial velocity $(v_{2x}, v_{2y}$. The floor and the ball are ideally elastic, so the ball will jump infinitely long, reaching the same maximum height (it has no importance for finding out the final horizontal velocity).

In fact, the formula (*) is the formula I have problems with. But why is it in fact the formula for angular momentum conservation for the axis of tangency.

Assuming it is an elastic collision, you will have, right after it, a ball with the same rolling motion (anticlockwise) but translating in the opposite direction at $v_0$. Now there is friction because the ball is "sliding", and the new equilibrium movement will be when both are moving without sliding again at $v_k$. Let me know if you do not know how to solve this last problem. In short, the effect of the collision is only to change the direction of $v_0$. The friction between the wall and the ball should have no effect at all (as the collision is infinitesimally short)

UPDATE: I assume that the ball reverses $v_0$ and friction starts until the ball stops sliding. Thus the final angular speed will be $v_f/r$. We have

where $t_s$ is the time it takes to stop sliding. You can obtain $t_s$ from the torque:

In such a case we get:

Not the answer you're looking for? Browse other questions tagged homework-and-exercises newtonian-mechanics angular-momentum collision angular-velocity or ask your own question.