Is it possible to shoot bullets in space or would the recoil of the gun be too strong? 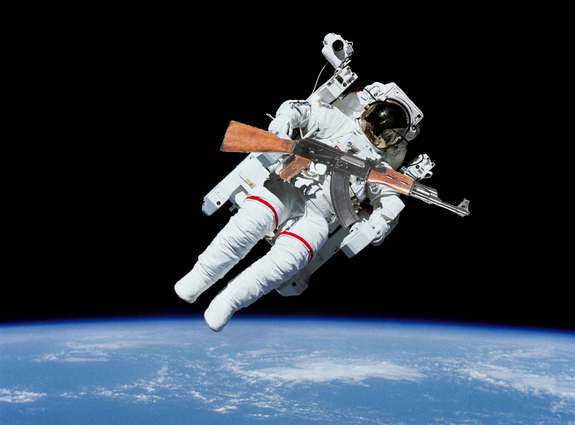 I've read a few articles that say that astronauts have already brought guns in space and that shooting bullets in space is possible.

But won't the recoil of the gun be too strong?

Law of conservation of momentum:

I've found some values on Google:

And therefore we get:

That's the typical speed of a car on a freeway.

It's an uncontrollable recoil.

The gun would be pushed back so powerfully that it would very probably damage the astronaut's spacesuit and kill him.

But Russian Soyuz capsules wouldn't carry firearms if using them would lead to an instantaneous death for their own user. So I must be missing something.

Still even if the astronaut could somehow hold extremely tightly to his gun and absorb all the momentum, he would still be ejected at a speed of around $1.5$ km/h $=$ $1$ mph (and maybe he'll even get stuck spinning for a while like in the movie Gravity), which would make guns not very effective in space since it would take time to find a way to re-stabilize yourself and re-aim in order to fire a second bullet.

Note: I know nothing about guns (I don't live in the US), so forgive me if I missed something obvious.

You've calculated the speed of a remote-triggered gun after it fires the bullet, true. However, there's actually nothing about space in your calculation, as @ACuriousMind noted. In theory, a gun fired on Earth could fly off just as fast, at least for a second. What you should use is not $m_\mathrm{gun}$ but $m_\mathrm{gun} + m_\mathrm{person}$. The gun never gets up to that speed because I start acting against it immediately and continuously.

The problem in space you have is that the momentum you do get, even after calculating with both masses, will stay with you, and you start drifting away. Worse, you probably didn't fire along a line intersecting your center of mass, which means that you now have some crazy rotational motion. Whether or not this is dangerous depends on your zero-gravity shooting range's particular setup, but it doesn't sound comfortable.

For most guns, you can roughly hold them in place while fired. That is, the repulsion will not only "hit" the gun's mass but the astronaut's mass too, not allowing the gun to gain such high speed.

But I guess the most severe problem will be this torque applied to the astronaut if the momentum is not directed towards the center of mass, which leaves him spinning if no counter-torque can be upheld.

Idealize the astronaut as an homogeneous cylinder with a moment of inertia $\Theta = \frac{1}{2}mR^2$ and $R\approx 0.5~\text{m} $. Let the bullet be fired at $R$ perpendicular to his symmetry axis and his line of sight such that this is the worst case scenario for spinning. Conservation of angular momentum demands $$ L = \Theta \cdot \omega = R \cdot p_{\text{bullet}} $$ for the astronauts angular momentum and therefore $$ T = \frac{2\pi}{\omega} = \frac{\pi \cdot m \cdot R}{m_\text{bullet} \cdot v_\text{bullet}} \approx 14.73~\text{s}$$ the time for one revolution of the astronaut.

As the other answers have stated, the primary oversight in the original question is the mass of the astronaut/cosmonaut holding the firearm.

Typical small-arms projectiles have a mass ranging from 3 grams to 13 grams. Typical velocities range from 250 m/s to 800 m/s, and are inversely associated with projectile mass (that is, lighter bullets are fired at higher velocities, while heavier bullets are fired at lower velocities). So we'll keep your original sample number of 800 m/s, but instead associate it with a more reasonable 3 gram bullet; this is actually pretty close to the 5.45x39mm cartridge that the TP-82 can fire.

Running with the new example numbers:

What's the difference between where you are and space? Atmosphere (ie air pressure), temperature, gravity, radiation. Think about how each of those affects what happens to someone after they pull the trigger of a gun, on earth.

Atmosphere: has no significant impact on the effects of recoil. It will help slow the bullet down but that's not relevant to what happens to the gun.

Temperature: this could potentially affect the firing mechanism of the gun, or the charge of the bullet. Most likely candidate for messing with your shooting, i'd say. On the other hand, while space is very cold, it's also medium-less, ie there's nothing (or at least, not much) to transmit the molecular vibration (heat) away from the gun. So, the gun would actually cool down very slowly.

Gravity: It's your strength, not gravity or atmosphere, which stops the gun flying back into your face when you fire it. Gravity helps you anchor yourself to the ground, so your whole body would likely spin round, unless you're shooting from the hip (or tummy perhaps). You would move backwards with the same force as that applied to the bullet, but at a much slower speed, since you weigh much more than a bullet (acceleration = force over mass, remember). Lets say that the bullet weighs 10 grams for example, and you weigh 100 kilograms: the acceleration you're subjected to during the firing, and therefore your resulting speed, will be 100,000/10 = 10,000 times LESS than the bullet. A typical bullet speed might be 1000 mph (to make the maths easier), so that divided by 10,000 gives you 0.1 miles an hour speed. Typical walking speed is 3 mph, so you would drift backwards at one thirtieth of normal walking speed. This isn't very dramatic.

Radiation: You would be in big trouble without good radiation shielding. The gun would be fine.

The problem (read error) with your calculation is when you assume the speed of the bullet to $$v_{bullet}=800 m/s$$ This is the speed the bullet gets if the gun is being held relatively still by a person standing on fixed ground.

And since we are only talking about horizontal directions (so no graivty is involved) you could just try jumping up from the ground, then fire a gun and see how much horizontal speed you get.

ragnarragnar
1
$\endgroup$
1
Add a comment  |
Highly active question. Earn 10 reputation (not counting the association bonus) in order to answer this question. The reputation requirement helps protect this question from spam and non-answer activity.

Not the answer you're looking for? Browse other questions tagged homework-and-exercises newtonian-mechanics momentum conservation-laws estimation or ask your own question.

4
How much iron would I have to shoot into the Sun to blow it up?
1
Would it be possible to make a space elevator only in the atmosphere?
1
Where would be the source of thrust for a rocket thruster in space?
0
Would a space elevator theoretically be possible on a tidally-locked planet?
4
Why does the recoil of a gun go up?
0
Can you jump off the counterweight of a space elevator at 1.2 x geostationary orbit? Is the assumption correct that an 80 kg person would weigh 2 kg?