Recently, I learned how to derive $E_0 = m_0c^2$. However, to do so, one must accept the relativistic mass equation. How does one derive the Lorentz factor $\gamma$?

After some searching, I found a very simple way to do so. 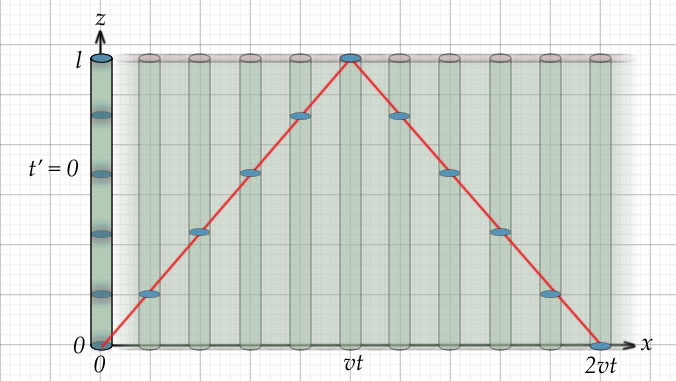 The blue disks shows show light traversing up a rod. If the rod were stationary then the light would reach the top in ct where t starts at t' = 0. However, with the horizontal motion of the rods, the light takes a diagonal path, indicated by the red line. By the Pythagorean Theorem, we get $$d^2 = l^2 + (vt)^2$$ (d being the distance of the first half of the red line)

Which is the Lorentz Factor

I think the Lorentz factor is wrong because it's based on Einstein's 2nd postulate which implies that the speed of light is constant irrespective of the motion of the emitting body. However, most people apply it as if it were constant for all observers.

In any case, it's a postulate i.e. an assumption. Einstein used the speed of light as constant after Maxwell calculated its value from the permeability and permittivity of free space which are constants and cannot vary under any circumstances.

Now light is made of photons which are electromagnetic particles. That means that velocity will interfere with the strength of the magnetic field. And it's either the velocity of light relative to the observer or the observer's velocity to that of light - they're equivalent. Maybe that's how the Doppler shift happens. We don't know what wavelength refers to. Maybe it's inversely proportional to the strength of the magnetic field component of the electromagnetic field.

Keeping the strength of the magnetic component of the electromagnetic field invariant across all frames of reference, may be a mistake. This means that all forms of relativity may be wrong. I'm certain of it. It could turn out that Galilean transformation was the right one to use after all.

Not the answer you're looking for? Browse other questions tagged special-relativity inertial-frames mass-energy lorentz-symmetry or ask your own question.

19
How do I derive the Lorentz contraction from the invariant interval?
4
How can one motivate the relativistic momentum?
1
Why 4-momentum is not transforming as vector when time is reversed?
1
Understanding the proof for time contraction in special relativity