Recently I watched a minute-physics video that suggested that a better name for the beginning of time would be "Everywhere stretch" because there wasn't a space-time singularity that formed where the universe began to expand but the expansion happened everywhere.

So, sorry for having a lot of questions and expressing them so confusingly; my only knowledge on the matter comes from Steven Hawking books and some articles. I have numbered the questions so that I avoid causing any more confusion.

The Big Bang is a mathematical model of how the observable universe evolved , based on fitting astrophysical observations. Like all models it has its region of validity. When I read cosmology fifty years ago, the model included a singularity at the origin, because that is what the mathematical functions of the General Relativity solutions showed. The model at the time fitted the observed expansion of the universe, which showed clusters of galaxies receding from each other at a certain rate. In that model, all (x,y,z) points at t=0 were at (0,0,0) and it makes no sense to talk outside of this point within this model, a singularity. It was as if an explosion started from the origin, in this model.

It is well known though that when singularities appear in a physics model, it is a sign for the need of an extension of the model or a different model, as happened with the introduction of quantum mechanics for the microcosm of particles, which avoids singularities with the Heisenberg uncertainty principle.

The need for a quantum mechanical framework came from the new astrophysical observations of the last sixty years. The cosmic microwave background observations could not be reconciled with classical thermodynamics within General Relativity. The CMB showed great homogenization, with differences in the temperature map of order of 2*10^-5. This homogenization could not happen at that early time of photon separation, 380.000 years in the history, and quantum mechanics was introduced at the beginning of the universe to homogenize the system.

At the same time observations showed that the expansion of the universe is not constant, a bang and free tracks, but is accelerating and new physics is introduced, dark energy , to explain the phenomenon and still keep a shell of the original Big Bang General Relativity solution. 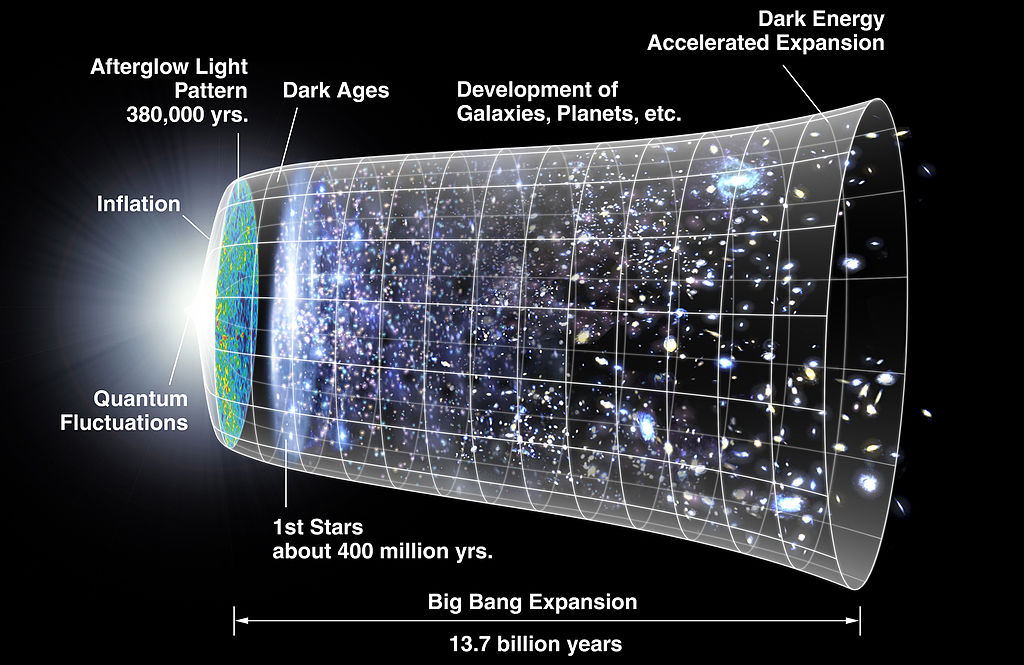 Now to your questions:

1). As I said, everything was at one point at t=0 in the theoretical model. In the present history there is a quantum mechanical uncertainty as to the region which projects to a point from the classical BB.

2). speculations there are many. The standard physics status is in the picture above

3).is answered by my exposition above 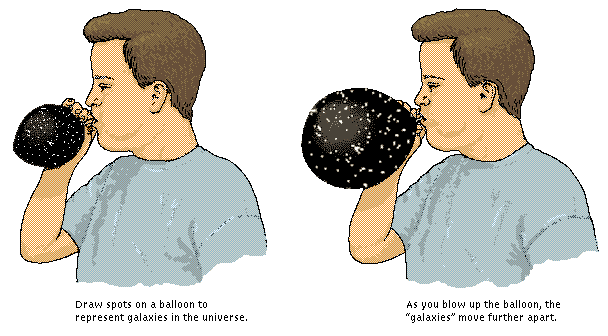 The universe is still expanding as if space were the surface of a balloon. An interesting consequence of it being a stretch everywhere is that points that are further away should expand away more quickly. This is indeed so. The speed that two points expand away from each other is given by the equation $v = H_0D$, where $v$ is velocity, $D$ is distance, and $H_0$ is something called Hubble's constant. We can say that as $D$ gets bigger, $v$ gets faster.

Not the answer you're looking for? Browse other questions tagged general-relativity cosmology space-expansion big-bang dark-energy or ask your own question.

363
Did the Big Bang happen at a point?
23
Did spacetime start with the Big bang?
14
What does it mean that the universe is "infinite"?
6
Before the Big Bang
0
The curvature of our universe?

1
Which big bang theory has more assumptions?
2
In a Big Crunch, would there be more mass than at the Big Bang?
2
Is there any way to tell if the Big Bang happened everywhere or just in some regions of the entire universe?
0
When did the Big Bang happen?
10
So Universe Expansion is accelerating, it already did with the Big Bang, so what came in-between?
0
Big Bang as a Shotgun Blast, not Raisin Bread