In our group of experimental physicist who have nothing to do with and know very little about quantum field theory, we recently had a question concerning the propagation speed of photons in vacuum:

My understanding is that a photon propagating in vacuum has a small probability to spontaneously create a particle/antiparticle pair that will then quickly recombine to emit a photon again. So to fully describe photon propagation, this and other higher-order QFT effects must be considered. 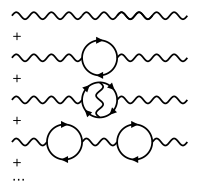 Drawing the analogy to light propagation in a medium, I would expect that these interaction processes might effectively slow down the photon. So we might find that the propagation speed when taking all higher-order contributions into account (lets call it $c_\infty$) is lower than the speed $c_0$ when just considering the interaction-free 0th order.

Because we cannot just switch off all interactions, only $c_\infty$ is experimentally observable. I was wondering how this relates to the speed of light $c$ as it appears in STR.

So my question is, which of the following is true?

So, first, how it does not make sense: What's the "speed" of a quantum object? It has, in general, no well-defined position, so $v = \frac{\mathrm{d}x}{\mathrm{d}t}$ is rather ill-defined.

The answer is: No, the masslessness of gauge bosons like the photon is protected by gauge invariance (in particular variants of the Ward identity) at all orders in perturbation theory, since gauge invariance is a topological property which cannot be broken by perturbative effects (see, for example, this paper).

It is a standard exercise in most quantum field theory books that the 2-point function does not vanish outside the light-cone of a particle. Less technically; the probability that some particle $r$ away from a source feels the effect of the source quicker than light to travel would $r$ is non-zero. That is a good definition of superluminal motion. See for example chapter 2.4 of Peskin and Schroeder where the Klein-Gordon field and causality are discussed. The probability for correlations outside the light-cone decays exponentially. One may think of this in terms of a standard quantum tunneling problem and say the particle tunnels out. This is shown in (2.52) of Peskin with all the technical details I omit here. There is a simpler introduction in 2.1 of Peskin. There he explains that anti-particles save causality in a quantum field theory by cancelling out the super-luminal probabilities of matter with equal and opposite effects from anti-matter. This is mentioned on Wikipedia too.

By computing higher-order corrections to the 2-point function one adjusts these probabilities, changing the probability distribution, but not the cancellation mechanism. I would interpret that to be 3) of your options.

Finally I would like to clarify that in the standard model gauge invariance is not a topological property.

I was just looking up your level of education in order to gauge my further replies. I bumped into this, and whilst it's an old question, but I felt moved to answer it.

My understanding is that a photon propagating in vacuum has a small probability to spontaneously create a particle/antiparticle pair that will then quickly recombine to emit a photon again.

This is cargo-cult junk I'm afraid. As for why it's taught I don't know. But it is. You can see it here in the Wikipedia two-photon physics article: "A photon can, within the bounds of the uncertainty principle, fluctuate into a charged fermion–antifermion pair, to either of which the other photon can couple". However a 511keV photon does not spend its life magically morphing into a 511keV electron and a 511keV positron in breach of conservation of energy. These do not then magically morph back into a single 511keV photon in breach of conservation of momentum. And pair production does not occur because pair production occurred spontaneously, like worms from mud.

So to fully describe photon propagation, this and other higher-order QFT effects must be considered.

There's nothing to consider. When there's no other particles around, the photon isn't interacting. So it's propagating at c.

Drawing the analogy to light propagation in a medium, I would expect that these interaction processes might effectively slow down the photon.

Because we cannot just switch off all interactions, only c ∞ is experimentally observable. I was wondering how this relates to the speed of light c as it appears in STR.

So my question is, which of the following is true?

The answer is 3. The higher-order QFT corrections do not change the propagation speed of photons. Two photons interact through higher order processes. The idea that a 511keV photon is forever hoppity-skippity morphing into an electron and a positron and back is a fairy tale.

Not the answer you're looking for? Browse other questions tagged special-relativity speed-of-light quantum-electrodynamics vacuum ward-identity or ask your own question.

20
Do all massless particles (e.g. photon, graviton, gluon) necessarily have the same speed $c$?
1
Is it possible light is absorbed and re-emitted in empty space