It is well-known that a ball rolling down a half-pipe where the side it starts on has enough friction for the ball to roll without slipping and on the side other to be frictionless, that the ball will not roll to as high of a position on the other side as it started because at its maximum it still has rotational energy that it didn't have at the beginning which means that not all of its kinetic energy could have been converted back to potential energy. See the picture below: 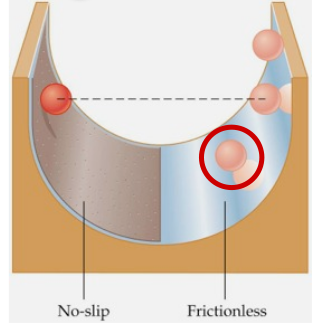 NOTE: the ball starts on the left in the picture and only reaches up the the circled position on the other side after being released.

That started me thinking, if the half-pipe were of the frictiony sort all the way along the path, would the ball go as high in that case? My thinking is that it would not because some of the energy would have been dissipated by friction. But I see another possible answer: rolling things don't seem to gain heat the way that rubbing things together does (at least in my experience) and thus maybe the friction doesn't take any energy from the ball -- maybe it only causes the ball to roll. In that case, the ball wouldn't lose any energy and wouldn't still have any rotational energy at the top of the other side -- so the ball's energy would all go back to being potential and thus would reach the same height as it had initially.

Which of these two interpretations is correct? Why?

I believe your second interpretation is spot on. Whenever anything rolls without slipping, it means that the point of contact of the ball with the frictional surface is instantaneously stationary. Therefore, the frictional force applied to this point does not do any work, and so there is no frictional dissipation. Also, because the ball is still rolling without slip by the time it gets to the other side of the ramp, this enforces that as soon as the ball is at translational rest (at the highest point), it cannot be rotating (otherwise it'd be slipping). So, the ball would have not rotational KE at this point, as so it would indeed reach the same height as it started off with.

It seems counter intuitive that friction throughout causes the ball to reach higher than with half-friction, half-smooth, but it makes sense as friction acts as the mechanism for the reconversion of rotational KE to translational KE.

Not the answer you're looking for? Browse other questions tagged newtonian-mechanics energy-conservation rotational-dynamics or ask your own question.

1
Rolling ball which slips
1
Can a ball stay still while laying on a inclined plane?
4
Conceptual rolling
0
Rolling on a track in vertical plane