Why temperature of liquid drops after spraying through a nozzle?

We have tested in our lab as mentioned in the picture. 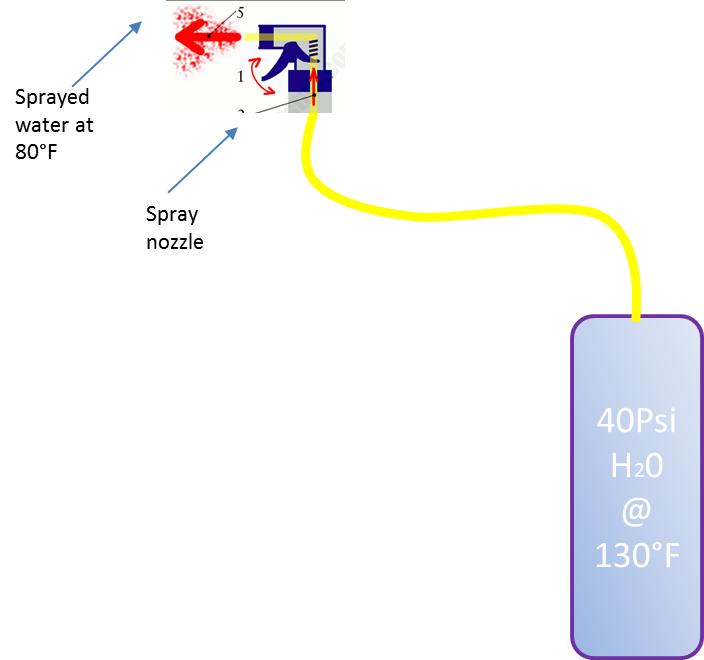 We connected hot water at $130^\circ F$ at $40 Psig$ to a nozzle (bottle sprayer). We measured the temperature differences inside tank and after spraying and found that there is a temperature drop of $50^\circ F$. We know that liquid water is sprayed and some heat is lost in the form of work done inside the nozzle. The surrounding temperature is kept at $75^\circ F$. This temperature difference is due to faster heat transfer happening due to increase in surface area of water as it is sprayed? Or does it have anything to to do with work done and surface tension?

When you spray through a nozzle the water gets converted into tiny droplets, thus the surface area increases. Due to the increased surface area, the heat dissipates to the surrounding air molecules the water's temperature decreases.

Also, if the surrounding air is at higher temperature than the water then the water will get heated up.

Given the cooling attendant to evaporation of even small amounts of water, it's likely that it is the source of the cooling effect.

A question was asked above, "Have you also tested at different relative humidities of the surrounding air?",
but it was not answered.

You should carefully measure the volume in the hot water source vessel before and after you have sprayed the water thru the nozzle. You should also collect the drops of water you've sprayed in a graduated container.
You will collect less than you sprayed, and the difference in the two volumes has evaporated. The heat of evaporation per mol of water will reveal where the energy went, resulting in cooled drops.

I think that the answer is more complicated than that. What holds liquid together when it is siphoned? People don't quite know however it would seem that there is some energy that holds it together. It is related to the vibration of each molecule in the system. When you force water through a nozzle you are in fact applying pressure on the water. This forces the water molecules together and reduces the temperature through reduced vibration for each molecule. You can not create or lose energy and therefore localized potential energy is built up in the system at the point of the nozzle. This is why you can fill a higher up tank of water when you put your finger over the end of a hose pipe. You have not created energy however because the water is cooler than what it otherwise would have been. The reason that you get the spray is because for the water to hold together you need energy. When you remove the vibration energy and instead create potential energy your water has less potential to hold together and has a greater propensity to spay. It is possible that the water will lose temperature to a colder environment when the spray forms, however I don't believe that this would be the key explanation.

I'm fairly certain that this can all be explained in terms of the ideal gas law, pV=NRT. Yes, there is evaporation and heat exchange at work, but the temperature difference is mainly explained by the fundamental relationship between pressure, volume, and average temperature. I'm guessing that you're measuring the temperature of the spray, which is a mixture of water droplets and water vapor. The water droplets themselves shouldn't experience that great of a temperature change, since water is essentially incompressible, but the rapidly vaporized water which comes out is experiencing a large drop in pressure and, since volume and N are kept constant (and R is itself a constant), the temperature will drop too. This, if I'm not mistaken, is exactly the mechanism modern refrigerators use to remove heat.

Not the answer you're looking for? Browse other questions tagged thermodynamics fluid-dynamics temperature or ask your own question.