This is a problem from the problem book by IE Irodov (Problem 1.106). We have a rough inclined plane with coefficient of friction $\mu = \tan\alpha$. A particle is kept on the incline and projected with an initial velocity $v_0$ 'sideways' to the incline, that is into the the plane of the figure shown below.

A coordinate system is set up in the problem with the x-axis pointing down the incline and the y-axis along the initial velocity vector (the origin is at the initial position of the particle). We need to figure out the magnitude of the velocity as a function of the angle $\phi$ its vector makes with the x-axis.

I did the problem in the following manner:

We may fix the velocity vector at the origin and resolve components of the forces acting on the particle as shown: 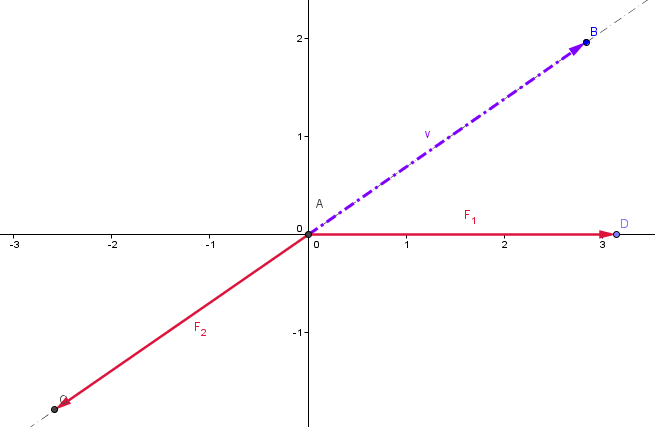 $v$ is the velocity at an arbitrary time, $F_2$ is the frictional force ($\mu mg\cos\alpha=mg\sin\alpha$), and $F_1$ is the component of gravity along the incline ($mg\sin\alpha$). Note that $\angle DAB$ is $\phi$. Now, we can figure out the tangential acceleration,

and the radial acceleration

We can introduce a change of variables in $(1)$

Integrating yields a solution of the form,

But, when I saw the solution, the problem was solved quite simply: we can see that the acceleration along x-axis is $g\sin\alpha(1-\cos\phi)$, which is equal in magnitude to the tangential acceleration. Thus, $v$ and $v_x$ will at any point differ by the same constant value $C$

This $C$ can be easily determined from the initial conditions. This yields,

Where did I go wrong?

EDIT: This is another figure I'm including just to clarify the situation presented in the problem. Here are different views of the incline for an arbitrary $\phi$. 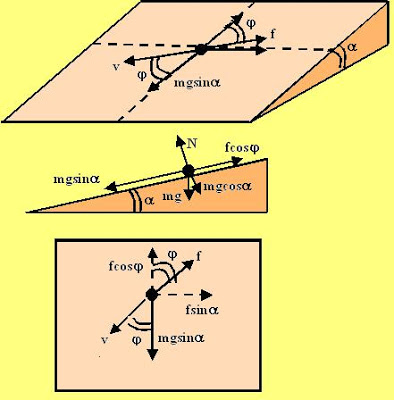 3
The trajectory of a projectile launched from a hilltop
0
Solving inclined plane using diff. frame
1
Minimize initial velocity of projectile to arbitrary point
2
a problem on finding acceleration by differentiation
3
Conservation of momentum for moving inclined plane
3
Does the law of reflection hold for balls bouncing inelastically on inclined planes?
0
Determine path of golf ball