What makes a collision superelastic?

And I've looked online online a lot, but I still don't really grasp the idea.

Can someone explain it to me whilst giving me multiple examples?

EDIT: Thank you for the answer @AliMoh but I think you just added to my confusion, I've heard of of two examples, I've heard "Basically, it's like a bomb or explosion", and I've heard "Imagine two karts colliding together" and now this, I still don't understand, or rather, I'm confused.

EDIT2: Thanks @SirElderberry and @AliMoh , both of you really helped me understand, but just to clear up and state why I was confused in the first place (I know this goes against the rules, but bear with me), I'm doing this for a multiple choice homework, and two of the answers seem correct (According to my understanding right now) So would a falling grenade AND two colliding bicycles be superelastic collisions? (You don't have to answer this, I'll just assume the question is wrong and blame my teacher)

EDIT3: I REALLY like both of your answers, but I have to choose just one as the correct answer... I want to credit both of you though, and I don't want one of you to feel left out or inferior cause you both helped...

$E_1 > E_2$: This is usually called an "inelastic" collision, but given that we're talking about two different kinds of collisions which are not elastic, let's call this "subelastic." In this case, some kinetic energy has been lost. "But," I hear you say, "conservation of energy?" Right. It hasn't been lost, as in destroyed. It's been lost, as in now it's something else. Maybe you deformed one of the balls a little bit--it isn't perfectly round anymore, so some work went into pushing the material around. Not all of your kinetic energy made it through to the other side: some of it is now stored as potential energy.

$E_1 < E_2$: Now we have more kinetic energy at the end than we started with! That's way better than an elastic collision, if "better" means "things are going faster now" which I think it does. So we'll call it "superelastic." Again, conservation of energy. It had to come from somewhere. What we say now is that it must have come form some stored energy in the system. Perhaps your friend, without your knowledge, replaced some of his cue ball with highly sensitive Hollywood-movie-explosive-grade nitroglycerin. As soon as the balls made contact, there was an explosion which released the chemical energy of the explosive. Your cue balls fly off dramatically at far higher speeds than expected. Your kinetic energy all made it through, but now there's more, so you must have taken it from somewhere. 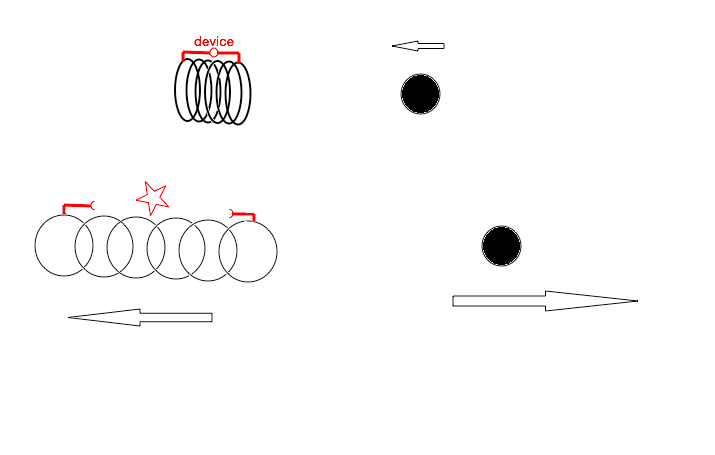 Imagine a massive spring of high spring constant being compressed with an extremely delicate device (i.e. once touched will release the spring), now you can envision that a collision between a slowly moving particle and this device, would release the spring and the final kinetic energies of the massive spring and the particle will be larger than their initial one, because the elastic potential energy was converted into kinetic energy.

Not the answer you're looking for? Browse other questions tagged homework-and-exercises collision or ask your own question.