How does potential energy work out for floating things?

"Oh my, this sure is a heavy ship and it can be lifted by simply adding water. What a marvellous machinery. After all, I could lift that ship with my teacup and a bit of water in it"

Which in turn spawned the following thought experiment:

Given some basin of know area, I can pour my teacup filled with water into it. The water level will be raised by a certain amount, depending on the volume and area. Seems legit so far.

And this is where things started to feel a bit dubious.

How is it possible that I "invest" a (constant) teacup worth of potential energy, yet "gain" the potential energy of rising an arbitrary big mass that is floating in my basin by the constant amount caused by the water from the tea cup?

That right there doesn't sound dubious any more, that sounds plain wrong to me. Because wouldn't that allow the teacup ship lifter gain more potential energy out of the process than he needs to re-rise the water into his teacup?

Where did my thought experiment took a turn for the worse?

I try to describe my problem in more detail: A big ship needs more space, so the basin gets bigger, right?

I'm afraid that's not the case and pretty much the core of my problem: The geometric properties seem to be independent enough to allow a "gain" in potential energy.

Here's how: Let's say the basin area is constant. This means the water level rises a constant amount (depending on how much water is in the teacup) Now how does the constant basin support "arbitrary large masses"? By varying its depth. In order to make a bigger mass float, it has to displace more volume (of water). As the area is fixed, the ship/boat/duck can extend its volume in the third dimension (down) to displace more water, thus supporting more mass to float, yet being raised to the same height as the basin area stays constant.

How is it possible that I "invest" a (constant) teacup worth of potential energy, yet "gain" the potential energy of rising an arbitrary big mass that is floating in my basin by the constant amount caused by the water from the tea cup?

The mass cannot be "arbitrarily big". Since it is floating, it has a net density that is less than that of the water. Therefore the mass of the ship is identical to the mass of water that is "missing" from the lake/pond.

If the barge weighed more than the empty pond, it would not be floating.

To address the specific concern of raising a ship that is longer/deeper in a pond, let's imagine that we have two cylinders in a pond. Each has identical densities and cross section, but one is twice the length (and twice the mass) of the other. As both are floating, the larger one extends deeper into the pool. In fact, the lowest point will be twice as deep as the other (independent of the actual density).

For a moment, imagine that the water does not flow, but maintains its location as we directly lift the cylinders (like it's jello). We raise both cylinders by $1cm$. Since one is twice the mass, it takes twice the total energy to raise it that amount. 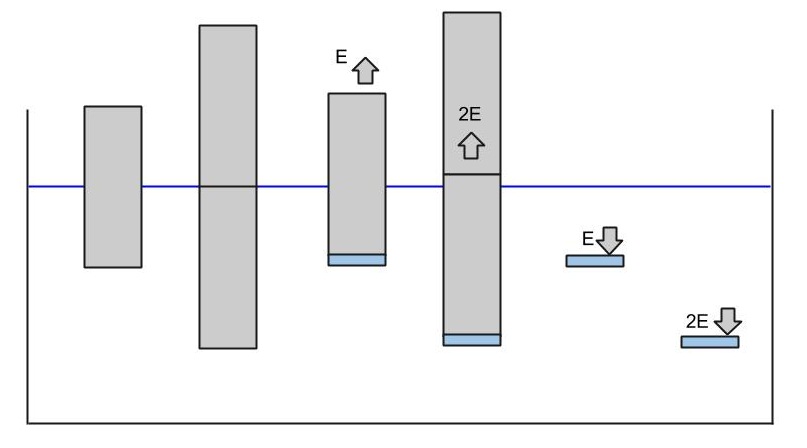 Well, I guess see floating things are yet to reach the ground level, because ofcourse an object submerged at the bottom most part of the seabed would have less potential energy than the object which is floating right? Implying that floating objects do have potential energy

1
How does potential energy work in the context of objects in space?
1
Anchor of a boat
1
Volume of melted polar ice caps
3
Does an object need fluid under it to float?
0
Are these sandals floating due to surface tension or buoyancy?
0
Gravitational potential energy and kinetic energy
1
Problem Regarding Buoyancy