This question was triggered by a discussion regarding the computer game Elite: Dangerous, where spaceships routinely operate in close proximity to stars (two or three light seconds away), at which point heat becomes an issue. Someone claimed that you would hardly feel any heating effect since there is so little matter around, indeed that you couldn't really tell if you are inside a star or not. I found that very dubious.

So let us assume we have spaceships and could fly around the solar system at will. Our ships have a certain degree of ruggedness to them, so people might get adventurous. What would it actually be like to approach, or even enter, a star?

We know that the corona is hot, hotter even than the surface. But it is also much less dense.

Q1: Would there actually be enough matter in the corona to make our ship heat up, or would we be able to ignore the very hot but few particles around us? What of the photosphere, or the upper convection zone -- those are still much less dense than earth's atmosphere at sea level. How much would the heating affect us?

Assuming we could pass through the corona, we would reach the photosphere, the point at which the (mostly hydrogen) body of the sun becomes opaque.

Q2: Does this opaqueness only apply to a certain layer (i.e. would we be able to "see" again once we go below the photosphere), or are all lower layers of the sun opaque? How opaque is that -- would we be able to see a couple of meters, some kilometers, or nothing at all?

Q2b: Would the matter directly in front of our cockpit window be bright, or dark?

How opaque is that -- would we be able to see a couple of meters, some kilometers, or nothing at all?

The photosphere of our sun is somewhere on the order of 500 km thick. For a quick ballpark, you can imagine an exponential decrease in the transmission of light which about this characteristic thickness. It might be a little less, but it's still order-of-magnitude accurate. That means that you would (theoretically) be able to see local objects just fine within the photosphere.

It's difficult to compare this to Earth's atmosphere, because scattering of light is both Raleigh and aerosol, and the concentration of aerosols differs at different times. However, even Raleigh scattering attenuates more than half of the light within 100 km. That means that you can actually see better in the sun's photosphere than you can in Earth's atmosphere.

Would the matter directly in front of our cockpit window be bright, or dark?

Now for the qualifier, being inside the photosphere would render human eyes useless instantly, because it would be like painting the sun's brightness over your entire field of vision. A spacecraft 100 km away could be identified with a telescope (if this telescope is not actively melting), but it would not be any brighter than the background of photosphere gas. Nonetheless, it would still be identifiable by color, contrast, and so on. In fact, if the spaceship was mostly absorbing of radiation, it would be a distinct black spot among a bright background.

I could get more specific to speculation about spacecraft. They will need to have stored thermal mass in order to absorb more heat than they emit. Reflection is a good option, but it's not perfect. Active cooling of the spacecraft's surface is likely in order to avoid melting. Thus, spacecraft would be slightly "camouflaged" by thermal necessity, but not perfectly.

Does this opaqueness only apply to a certain layer (i.e. would we be able to "see" again once we go below the photosphere), or are all lower layers of the sun opaque?

Your vision will certainly decrease as you reach lower layers - since they have higher density and give off more radiation. The photosphere is only unique in that the radiation emitted commonly makes it out into space where it can continue indefinitely. For the lower convection layer zones, radiation is given off at a much higher rate, but it is almost entirely reabsorbed.

Stars above a certain mass threshold actually transmit their heat through the interior zones through a radiation gradient. So I hope this helps to illustrate that the inner zones are not "less bright". They would be blindingly bright (well the photosphere is already blindingly bright, but these would be worse), but possibly at higher temperatures, which go beyond the visible range.

Well, I can give you a definitive answer to Q1, but my answer to Q2 would only be educated speculation. Perhaps some of the astrophysicists on here can be more help with that one.

However, before I tackle Q1, a very important disclaimer: Temperature is a measure of the average kinetic energy of the particles of an object, and cannot be used all by itself to determine the amount of heat that will be transferred to another object. The total thermal energy possessed by the corona will depend not only on the temperature, but also on the total amount of matter.

Using temperature all by itself can be very misleading, because if you have a gas with very low density, and very few total particles, you can easily have a measured temperature of several thousand Kelvin, especially if there's just a few very energetic particles in the mix. However, if the total number of particles is small, the total thermal energy of the substance will also be small.

The reason is due to heat transfer through radiation. You see, it's not necessary that two objects physically touch to exchange thermal energy. Objects called black bodies emit electromagnetic radiation. The frequency and amount of radiation emitted depends on the temperature of the black body. 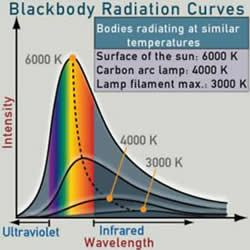 The top curve in the above picture roughly represents the black body curve for the Sun. The y-axis shows intensity, and the x-axis shows the wavelengths emitted, which go from ultraviolet, to visible light, to infrared from left to right.

Turns out that the sun emits about 44% of its radiation as visible light, and about 48% as some type of infrared radiation. From 93 million miles away (8 light minutes), this is still enough radiation to light and heat the earth. If you want to travel around the sun from 1 light second away (roughly 1/500th the distance) imagine how much more heat you will receive! It turns out the the energy you receive from the sun is inversely proportional to the square of the distance, so if you are 500 times closer to the sun, you will receive $500^2$ or $250 000$ times as much radiation! As a result, the thermal radiation emitted from the sun is more than enough to bake you at that distance, regardless what the corona does (or doesn't) do to you.

The corona even though it is really low density it is still at millions of degrees. It might not require a heat shield that can withstand millions of degrees but it still needs to withstand thousands of degrees. The photosphere and anywhere below it is opaque. This is due to the fact that now the sun surface now is dense enough and hot enough that you can not see through it anymore. You would probably be able to see yellow light until of course the sunlight blinds you. So technically you would see the sun yourself but imagine you could see well it is just going to be all yellow light floating around left and right. Well to the observer it would be dark because the light will blind him but if he could see(all wavelengths of light) then it would be mostly light.

Not the answer you're looking for? Browse other questions tagged thermodynamics astrophysics thermal-radiation stars or ask your own question.

5
The Sun Can Make Stuff Hotter Than Itself
4
Total radiation flux from a star
1
Dark Matter as possible an explanation for Coronal Heating
11
Would a rocky planet orbiting so close to a very hot star eventually vaporize?
2
Does fusion continue to happen as a star collapses into a black hole (beyond our view)?
5
Is proton decay considered in neutron star models (and LHC)?
3
Don't we know how the magnetic field of the Sun is created?
0
In-Vacuum Cooling Via Blackbody Radiation