Two masses on a frictionless surface connected with a spring

I have a problem with an assignment with two masses on a frictionless plane connected with a spring.

Both masses are 1 kg, and the distance between them (the length of the spring) is 0.4 m. The spring constant k = 8 N/m. The first mass is given a initial velocity of 1 m/s.

The assignment is based on Walter Lewins lecture here at 48 minutes: http://videolectures.net/mit801f99_lewin_lec15/

I'm asked to write a python program displaying the positions of both masses, but I'm struggling with the formulas.

This is what i have so far:

again,i divide by 2 to get the oscillation of just m2

How do i make m2 dependent of m1's position? And how do i make them "move" along as they should? I have tried to create a function for center of mass, CM(t)=0.2*0.5t, to use as a reference of movement, but i cant get it right.

Can someone give me a pointer in the right direction?

Your mistake was to set x up as a cosine function - that implies that it is at an extreme of position at t=0 when in fact it is at an extreme of velocity (so position is "in the middle" and you need to use a sin function). That leads me to the following (you will need to check this and prove individual steps along the way which I did not give... it's not solving the differential equations but jumping to the answer - but I think that you should be able to work towards this answer with the above hint). 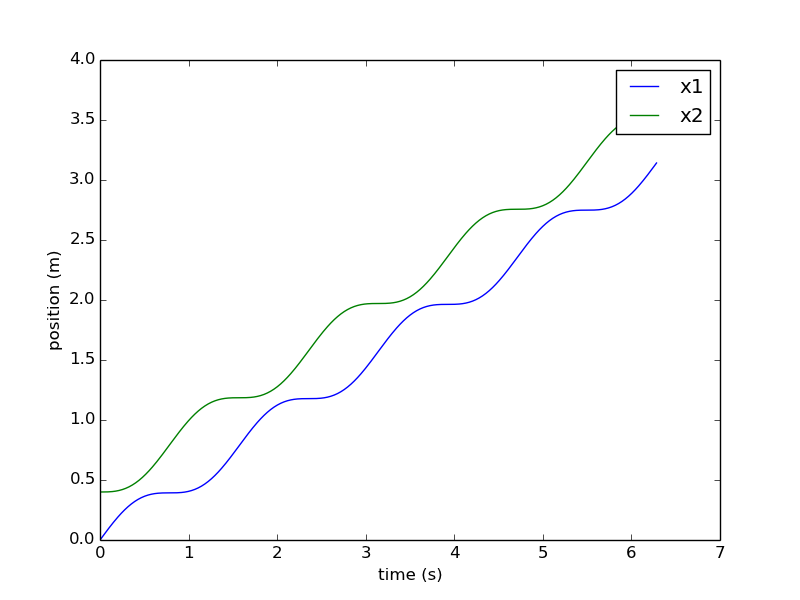 Not the answer you're looking for? Browse other questions tagged homework-and-exercises harmonic-oscillator spring or ask your own question.

6
Two masses attached to a spring
3
Equal mass on either end of a spring
7
Two carts connected by spring on frictionless track
2
Spring-mass system with complex spring constant
5
Two mass one-spring system natural frequency
0
Why do my boundary conditions not work out in a damped harmonic oscillator?
0
About a pulley, a rope, four masses and two springs: solvable or not?