Why is the prospective new kilogram standard a sphere?

I can understand the choice of material, silicon 28, but why is it a sphere rather than (say) a cube? Article here

I would have thought that a sphere would have been the hardest shape to machine accurately.

If you know the diameter of the sphere, you know everything you need to know about the dimensions. It all comes down to one single value.

Making very accurate spheres is not as difficult as you might think - it's no different than making optical glass or mirrors using grinding techniques, and, in fact, they are measured much the same way with lasers for very high accuracy.

This video goes into a little more detail as to why they are doing this, how they achieved it, and how the sphere is made.

There is a nice article in the New Scientist that describes how these spheres were made.

Sphere can be made very precisely (and their shape measured accurately) simply because of their symmetry - and therefore their volume can be determined most accurately. The video clip in the above article shows this in detail.

Of course a sphere also has the lowest surface area (less contamination) but I don't think that comes into it.

I wonder how much the sphere distorts under its own weight... if you use the Hertz equation (see for example here)

If that is correct, it implies a distortion of less than a nm for the sphere. Which is a reassuringly small number. I suspect that, on the scale of this experiment, it does not need to be taken into account (once somebody has done the calculation more accurately...)

I'd like to add a bit more to Adam Davis's concise answer.

Firstly, note that the lathing process shown in The video that Adam Davis's Answer links to with the sphere rotated and an oscillating abrasive cup sliding over its surface about pseudo-random rotation axes is the standard technique invented by Isaac Newton that is used today to make precise spherical surfaces. The point about the technique is that even if the abrading cup is not quite spherical, the system settles down to a state where both the cup and machined sphere are spherical, as they grind one another until the pressure between them is uniformly distributed across their contact region for all orientations of the pseudo-randomly oriented cup. This surface is of course spherical. One begins, naturally, with an oversize rough sphere and, through practice, tweaks the process so that the steady state is reached precisely when the desired radius is achieved.

Now I'd like to talk further about how amazingly accurately one can measure a sphere's radius and its deviation from ideal sphericalhood. The video briefly shows a simple laser ranging verification that would be done as a rough measurement during the sphere's making. To get really serious, one can do waaaaaay better than this, and so the following is my understanding (gleaned from questions at conferences) of how the CSIRO in Australia envisage verification would be done reasonably cheaply and certainly repeatably for the production of national and regional test standard kilograms.

This is done this through absolute interferometry - a completely self-calibrating measurement technique that not only measures the sphere's actual surface, but calibrates the interferometer at the same time. In principle, you can easily understand how interferometry can be self calibrating (this is NOT how it's done): you are counting numbers of wavelengths so "all you need to do" is to count the number of fringes by adjusting the pathlength from zero in an interferometer trained on one point on the sphere, and then shift to another point and do the same. So you can then describe the sphere's surface in terms of co-ordinates grounded on numbers of wavelengths. Not only would this be horribly time consuming, it would be impracticable mechanically, but the idea of characterizing the surface in terms of wavelength grounded co-ordinates is clear.

Here is where the sphere makes it easy - through the amazing Three-Sphere-Test. The paper by its inventor (James Wyant WARNING- Do not read this man's CV - Severe brain envy hazard)):

describes the technique fully, but the principle is as follows. 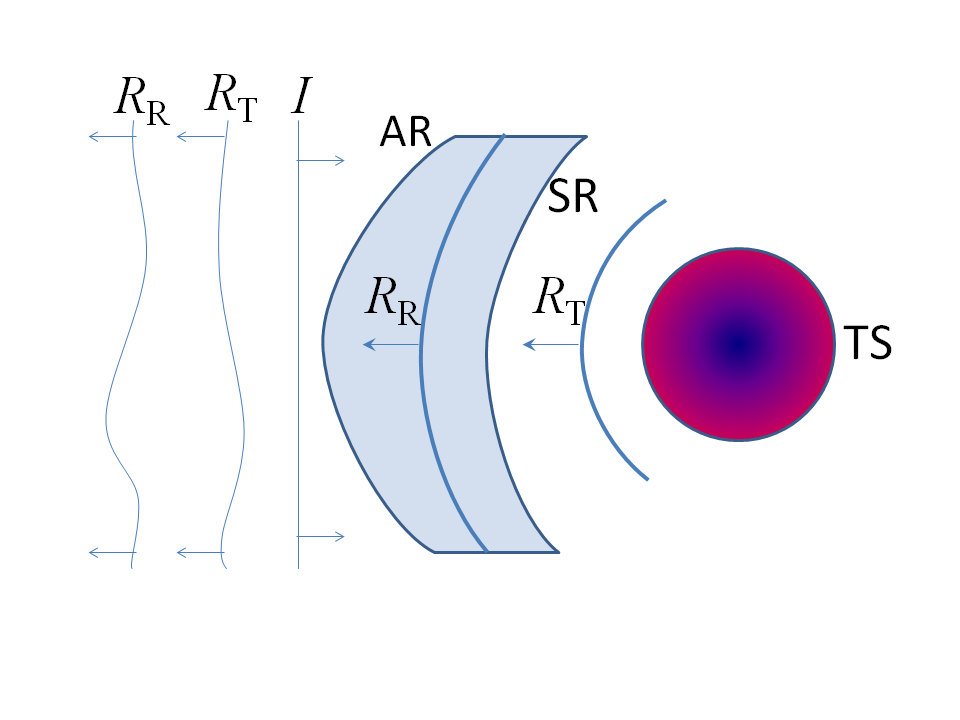 There is an analogous "three flat test". However, it is more time consuming and complicated. The three sphere test captures and wholly characterizes as much of the sphere as the interferometer's numerical aperture will allow (typically about 0.4NA, so we can image a solid angle $\pi\times NA^2$ or about a twentieth of the sphere's surface at a time and then make and link together thirty or so charts of the surface), and the movements between images are easy to automate as this kind of test is best done by a robotic, hands-off procedure.

With instantaneous phase shifting interferometry (where one uses tricks with the light's polarization) one can simultaneously take interferograms with relative phase delays of $\exp\left(\frac{2\,k\,\pi\,i}{N}\right);\,k=0,1,2,\cdots,N-1$ between the reference and probe beams (where $N$ is 3 or 4 in the implementations I have seen), so one can reliably reconstruct the test sphere induced wavefront map to within a tiny fraction of a wavelength. If you use high optical power (to get good SNR notwithstanding quantum noise) and average measurements, well under nanometre accuracy can nowadays be gotten by a test setup costing less than $USD100K.

Another reason that nobody David Richerby mentioned in a comment, is durability. The corner of a cube would be easy to accidentally break because a small force on it would equate to a large pressure (its area gets smaller as the shape of the cube gets more accurate). In fact I think it would be likely to break during machining, resulting in truncated corners (even if only microscopically).

A sphere might be harder to machine, but easiest to verify the accuracy of, especially when accounting for slight changes due to temperature.

It should be noted that any standard like this must not only have a mass of 1 kg (or whatever) but also have some secondary method of verifying mass, in this case, being able to count (to some accuracy) the number of silicon 28 atoms within the sphere.

1
Why the reference for kilogram has to be round in the Avogadro Project?
0
Why is a silicon ball with an exact number of atoms a bad measure of mass?

9
Why do we still not have an exact (constants-based) definition for a kilogram?
1
A sphere, a simple object?
62
Why is the ampere a base unit and not the coulomb?
66
What are the proposed realizations in the New SI for the kilogram, ampere, kelvin and mole?
69
Why is the mole/"amount of substance" a dimensional quantity?
2
Why must the kilogram standard be based on a kilogram mass object?
2
How would the density of a sphere of uniform composition vary with depth due to gravity?
27
What technology is needed for an individual to reproduce the current SI meter and kilogram from scratch?