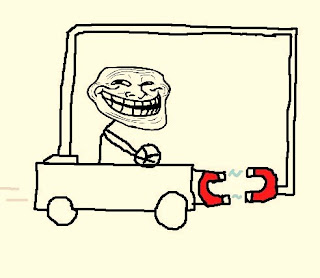 If I'm not totally dumb the car would move when the right magnet would not be attached to the car, at same distance of the booth magnets.

So why would it not move?

A simple symmetry argument might help here. Try to abstract everything away from your picture that is just a distraction. In the end it might look like this: 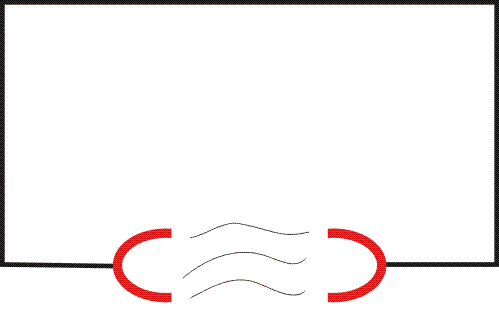 Why should this move to the left or to the right? It cannot and therefore adding a person and wheels does not change the problem.

The left magnet is pulled forward, pulling the car behind it.

The right magnet is pulled backward, pushing the car ahead of it via the rod that attaches it to the car. (The fact that the rod loops over the car and attaches to the back makes no difference.)

If the rod is flexible, the car will move forward as the magnets move closer together, but only until the magnets meet or the rod reaches the limit of its flexibility.

With careful control of the movement of the magnets (or any weight, magnetic or not), you can achieve some net forward motion by taking advantage of friction, since friction is non-linear. A slow movement won't overcome static friction, and the car doesn't move; a quick jerk in the other direction will cause the car to move. This doesn't violate any conservation law; the car is effectively pushing against the surface it's sitting on, just like any ordinary wheeled vehicle. It won't work on a frictionless surface.

But the original scheme would probably work in a universe that follows Warner Brothers cartoon physics. Working out a consistent mathematical model for that is left as an exercise.

Not the answer you're looking for? Browse other questions tagged electromagnetism perpetual-motion or ask your own question.

4
Why this perpetuum mobile can't be possible?
3
Please explain the flaw in this picture
-3
What's wrong with this car model?
-4
What is wrong with my perpetual motion machine model?
-1
Would this model of a boat move according to Newtons 3rd Law?