Does big bang have really any justification while we are living within a huge chaos?

All the physicists already know that the n-body problem reveals chaos, so that the planets around the sun should undergo deterministic chaos with a Lyapunov exponent of the order of, say, $\frac{+1}{3.5\,\text{million years}}$, [1]. This implies we cannot predict neither forward nor backward in time what was the orbital configuration of the planets around the Sun, when the prediction time goes beyond some finite time of the order of the Lyapunov exponent, [2]. Obviously when we account for any and all the celestial bodies the prediction time decrease significantly, I will say maybe to less than a few thousands of years if you ask me, [3].

Now a problem arises ... The apparent regular behavior of the celestial bodies in the sky is nothing but a short-period section of the whole chaotic picture, let say about a single point in the whole phase space. What does then, within this viewpoint, experimental evidences like "red shift" tell us? Or better to ask, what can they tell us? Does the idea behind "big bang" persist or it will lose its witnesses immediately?

(Of course you better know the distant to moon is altering, and many many other facts that all of you know better than me, the moon getting farther doesn't have anything to do with big bang and the whole universe expanding, does it?)

@RobJeffries conducted me in his comments to an article in which a regular behavior was predicted for the solar system within periods far longer than what I had mentioned according to another reference, [1]. Meanwhile, @DirkBruere mentioned in his answer that the overall behavior of the universe can be studied independent of studying the chaotic behavior of every single celestial body in universe, just as the cases for the kinetic theory of gases. According to these two notices I sought to find some references that will describe the matter more thoroughly. These are what I can say for now:

With all these considerations now I still have question regarding the predictability of the dynamics of the universe backward in time (general relativity is not a statistical theory), so that the red shift effect and the cosmic background radiation shouldn't be a strong justification of the Big bang idea. Do they?

[1] as for reference please check this youtube movie of Alex Maloney's McGill course on Classic Mechanics, around the minute 43

[2] as for reference for this check the page 322 of the book "Nonlinear Dynamics and Chaos" by Steve Strogatz, when he is defining and explaining the ``time horizon"

[3] This is my own intuition, so I added the expression that "if you ask me"

[5] Javadi, H. & Javadi, A. "Physics from the Beginning upto Now, Including presentation of CPH theory", Etta Publisher, 1386 (in Farsi).

[8] No Big Bang? Quantum equation predicts universe has no beginning

This may not seem like much of a postdiction, but if, before now, we had absolutely no idea where Earth was at that time, then this statement would become a major breakthrough in our understanding of the history of our solar system. In a similar manner, saying the Big Bang happened is just as deep. We don't know the exact conditions or the distribution of energy at the Big Bang (not yet anyway), but we have the evidence that it happened. We know that space is expanding and that galaxies and other celestial bodies are all moving away from us. We also know that the universe is cooling. We can determine the recessional velocity of objects at different distances and use that to determine the expansion history. Then we can trace this backwards and say that everything must have been contained in an incredibly hot and dense point at about 13.8 billion years in the past. This is our Big Bang era. We aren't saying exactly where things were and how much and what they were doing. Like saying Earth was in orbit of the Sun 4.5 billion years ago, we are saying the universe was a hot, dense, and incredibly small in scale 13.8 billion years ago.

Many models and theories exist that speculate on the initial conditions of the universe or try to establish more of the specifics during the Big Bang era, and can you blame us for being thorough?

I'll try to address as many of your follow up points as I can:

Both (1) and (2) are based on the idea that we are making postdictions that are too specific for a chaotic system to allow. I've attempted to explain how that is not the case in my above writings. If I have succeeded, then I don't think anything more is necessary for these points. If I haven't succeeded, then I'm not sure what reservations you have, so I'll wait to tackle these points.

Your point (3) is getting into chaotic inflation. Inflationary theories in general only exist to solve problems in the old Big Bang theory. But all inflation theories admit the Big Bang era occurs after inflation, and they also allow for the Big Bang moment before inflation (that is, the curvature singularity). The Big Bang era is the era of a hot, dense universe that is radiation/matter dominated and ends at about the time of recombination. Everyone agrees this happened just like they agree Earth orbited the Sun. Inflation itself (not just chaotic inflation) is a period of rapid expansion, but most physicists agree that there was probably a curvature singularity beforehand.2 There are theories and physicists like the one you quote that say a curvature singularity is unnecessary; that the universe needn't ever have been a point, but that doesn't mean they don't think the Big Bang era or expansion in general was non-existent.

Point (4) is not something to put a lot of weight on yet. In another of my answers I specifically addressed this exact paper and detailed how it was too insufficient to to take seriously.

1I looked it up and apparently "postdict" is a word that means exactly what I was hoping it did. Hooray for consistency of prefixes!

2 See another question and answer of mine for more information on definitions of the Big Bang as before and/or after inflation.

The problem is analogous to the physics of gases. Do we need to describe the chaotic motion of every molecule before we can determine overall properties? No.

I'm not sure if that touches your question, but the universe is thought to be non-chaotic in the long term behaviour because of some anisotropy in the initial conditions (at least this is the general opinion). I watched a cool vid about that a couple of days ago.

The point for which I agree with you, is that if looking at a certain situation, in general one cannot deduce the cause of that situation, since this is an inverse problem usually ill-posed (e.g. calculating matter distribution due to potential measurments). In this context, the big-bang-model is a good guess of the intial-conditions which may evolve into the current situations, but there is no certainty, that this is the only model able to do this.

The problem with this question is in the premise that where dynamical chaos is applicable nothing is predictable or can be extrapolated to the past. This is a wrong premise.

Take this demonstration of a chaotic system. Note that it is computer simulation and of course it fits real data. Computer simulations are time symmetric, so the individual points can be taken back with accuracies related to computer capabilities. If you take this double pendulum simulation and stopped it at one point you could not extrapolate to the vector of its beginning, with pencil and paper, but a computer, with all the values and the boundary condition can. It is the complexity of the problem and the simplicity of some descriptions that make dynamical chaos theory useful. I stress the "dynamical" because :

Chaos theory studies the behavior of dynamical systems that are highly sensitive to initial conditions—a response popularly referred to as the butterfly effect.

Dynamical clarifies that equations exist, chaos shows that the complexity is high and collective behavior is examined.

The same is true about the solar system, where the chaotic study applies too. The existence of planetariums uses the dynamical equations to extrapolate positions of planets, despite that the system is considered dynamically chaotic.

In a different framework, given a gas and infinite computing power the dynamical equations are known and given the initial boundary conditions and all the constants each individual molecule could be followed. Its position is truly chaotic as far as we are concerned but the principle tells us that we could determine it backwards and forwards in time. Fortunately we developed statistical mechanics, and before that , thermodynamics to have predictive and postdictive knowledge of a system as a whole.

Now the Big Bang hypothesis is not chaotic. 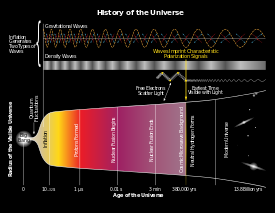 General Relativity is a dynamical system which sets the framework, the coordinates, on which the primordial soup of energy is developing in time. The soup is classical thermodynamic after a certain point in the expansion of the coordinates and as in a gas, the individual component, lets say protons neutrons electrons locations are irrelevant and fitted statistically after the first three minutes . The chaotic behavior is irrelevant to the overall development in time.

Before the 3minute point a lot of nuclear and particle and special relativity behaviors enter in the modeling, and quantum mechanics is paramount, again with dynamical equations. The inflationary period was introduced to explain the isotropy in the microwave background radiation. Homogenization could not be attributed to classical thermodynamics as the regions of space could not interact with each other classically . Quantum fluctuations have been successful in modeling the data.

So chaos is not the everyday meaning of chaos and is not applicable in physics wherever there exists complexity. Tools have been developed to model the data of the observed universe and they are very successful at the moment.

Not the answer you're looking for? Browse other questions tagged cosmology big-bang chaos-theory or ask your own question.

108
Why are some people are claiming that the Big Bang never happened?
34
Is the Big Bang defined as before or after Inflation?

1
Are there still Big Bang Gravitational effects
19
Does all hydrogen originate from the Big Bang?
1
Is it possible that big bang are still happening?
1
How does the ratio of hydrogen to helium help prove the big bang theory?