This is a section from Wikipedia:

In regions where a step potential or potential barrier occurs, the probability current is related to the transmission and reflection coefficients, respectively $T$ and $R$; they measure the extent the particles reflect from the potential barrier or are transmitted through it. Both satisfy: $$T+R=1$$ where $T$ and $R$ can be defined by: $$T=\frac{|j_{trans}|}{|j_{inc}|},$$ $$R=\frac{|j_{ref}|}{|j_{inc}|},$$ where $j_{inc}$, $j_{ref}$ and $j_{trans}$ are the incident, reflected and transmitted probability currents respectively, and the vertical bars indicate the magnitudes of the current vectors.

I can't quite understand why this is the case. So we can say there is an incident wave, a reflected wave and a transmitted wave and they are each associated with one of the three currents. Then the incident wave takes some probability into a region, whilst the reflected and transmitted waves take probabilities out, such that probability is conserved. I can't quite make the step in my head to then use this to define the fraction of particles reflected $R$ or transmiteted $T$ so could anybody help me please?

Edit: more simply, why does a probability current flow out of a region (normalized by the flow into the region) give the probability of a particle passing out of the region?

Edit 2: The probability current in 1D is defined as the probability per unit time flowing into or out of some region - for example, a potential step. We are looking for the probability of a particle being transmitted or reflected through this step. In words, we seem to be saying (particle incoming from left)

Consider $T$ for a moment for a single particle. Let's just, for ease of writing, say $T=.9$. So if you send in a single particle from the far left, 90% of the probability density continues moving right, and 10% of the probability density bounces back. So if you have a perfect detector at the far right, there is a 90% chance your detector will go off.

Now consider doing the same thing with a whole beam of particles (that don't interact with each other or in any way effect each other's propagation through the disturbance). If you send in $N$ particles, you will expect the detector on the right to go off $.9N$ times, because each particle individually had a 90% chance of hitting it. So, on the far right, you could say you could meaningfully say you detect 90% of the particles you sent in.

Edit to explain: "Why is $T$ the probability of a particle being transmitted?"

In quantum mechanics, we think of "an incoming particle" as a right-moving wavepacket from the left. (A wavepacket of energy ~$E$ is a superposition of waves of a small range of frequencies tight around $E/\hbar$, so the resulting wavefunction is not spread over all of position space, but rather is normalizable and concentrated in some region, and still has energy of roughly $E$.) So it "looks like a particle going right."

If we have a tight wavepacket so that $T(E)$ is a constant $T$ over the frequencies of interest, then as you evolve the system, 90% of that wavepacket will end up going right past the disturbance, and 10% of the wavepacket will get reflected back. It's easier to visualize this with an animation.

Griffiths discusses this topic at the end of Sec 2.5 (pg 75-76 in my copy). Shankar mentions it in Sec 5.4 (pg 175 for me), but the math of showing this apparently gets quite involved, so neither author puts forward a real proof I'm afraid. But see this related question. (Note that the notation in that question is different: they use $T$ and $R$ for the coefficients rather than the probabilities as you've done. So your $T,R$ is their $|T|^2/|A|^2,|R|^2/|A|^2$.)

Edit 2: To explain why we have ratios

The ratios are only there because when we work the problem with incoming and outgoing plane waves, our state is not normalized. If you (hypothetically) work the problem with a normalized wavepacket, then the total integrated probability density coming in from the far left (before reflection) is 1. Then the total integrated probability density moving off to the right at the end is just $T=\int_{t_i}^{t_f} j_\mathrm{trans}dt$ and this is, by definition, the probability of the particle transmitting.

When actually work the problem in practice, however, you generally don't use wavepackets, you use incoming and outgoing waves, which are not normalized. The total integrated probability density flowing in is thus not 1, but rather $j_\mathrm{inc}\times \mathrm{time}$, and the total integrated probability density flowing out is $j_\mathrm{trans}\times \mathrm{time}$.

The question we want to answer is "What would be the probability density flowing out if the total integrated incoming density is 1?" So we divide our naive unnormalized $T=j_\mathrm{trans}$ by $I=j_\mathrm{inc}$ to fix the fact that we didn't normalize our state from the beginning.

First off, I assume you accept that the probability density for the position of a particle is $|\psi(x)|^2$.

Now, what roughly happens in real scattering is that a particle whose wavefunction looks like the below image comes in: 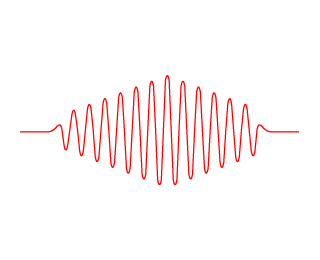 Then, after interacting with a potential, two smaller packets come out. The packet that transmitted through to the other side of the barrier has $T$ of the total probability density and the packet reflected from the barrier has $R$ of the total probability density. (By that, I literally mean that the reflected wave is $\sqrt{R}$ as tall as the original.) Then when you measure where the particle is, the probability of seeing it on the other side of the barrier is $T$.

Assuming you accept that, we need to combine this picture with the "probability current" picture.

Why do we even talk about probability current? When solving scattering problems, we use incoming waves of the form $e^{i(kx-\omega t)}$. These are convenient because they're of a single frequency, but are inconvenient because they have infinite extent. That means we can't say "after the $e^{ikx}$ comes in, a wave $\sqrt{R}$ as tall is reflected, and..." because there is no after. Instead, we rephrase everything in terms of probability currents, which tell us how the probability mass is moving. Our coefficient means that the rate of probability mass bouncing back from the barrier is $R$ times the rate that it's incoming.

When you combine these $e^{ikx}$ waves to make a realistic wavepacket, you recover the former picture: $R$ of the total probability mass is reflected and $T$ is transmitted. The wave hits the barrier once, and leaves.

Edit: agh, how did this four month old question get bumped to the top?

Not the answer you're looking for? Browse other questions tagged quantum-mechanics scattering reflection probability or ask your own question.

40
Why can we treat quantum scattering problems as time-independent?

40
Why can we treat quantum scattering problems as time-independent?
0
One dimensional scattering cross section
3
potential barrier scattering when particle energy equals to the barrier height
14
Klein paradox for bosons and fermions
1
Obtaining Transmission Coefficient of Beam Upon a Linear Potential
0
Should scattering states in 1D double delta function potential not lead to a steady-state problem?
3
Probability of finding a particle in a region even if the transmission into that region is zero
0
Unanswered Question on Potential Step Function