What is the effective Coulomb barrier for a Deuterium-deuterium fusion reaction?

I am seeing temperatures of about $40 \times 10^7 K$ online, but have no idea how they are getting this.

and the coulomb barrier is: $U=\frac{ke^2}{r}$ which needs to be overcome for fusion and the strong force to dominate.

This isn't for an assignment but for my own studies.

According to your question and the discussion in the comments there seems to be some confusion. Let's first try to answer your original question (Coulomb barrier for a D-D reaction):

Inserting the numbers for a D-D reaction, this results in $$V_{Coulomb}\approx440\,\mathrm{keV},$$ which corresponds to the value you got.

This corresponds to the potential wall we need to overcome to let the two Deuterium nuclei fuse. Luckily, though, there are two effects leading to a on average lower temperature at which fusion occurs:

The fusion rate coefficient or reactivity, $\left<\sigma_{fus}v\right>$, can therefore be calculated as the convolution of a Maxwellian distribution $f_M$ and the fusion cross section $\sigma_{fus}$ (which we know from extensive experiments). So to get the average temperature at which D-D fusion has the highest probability, we need to have a look at the fusion reactions:

They both occur with roughly the same probability. To calculate their actual reactivity, we look up data from experiments and might get something like what is shown in the following plot. 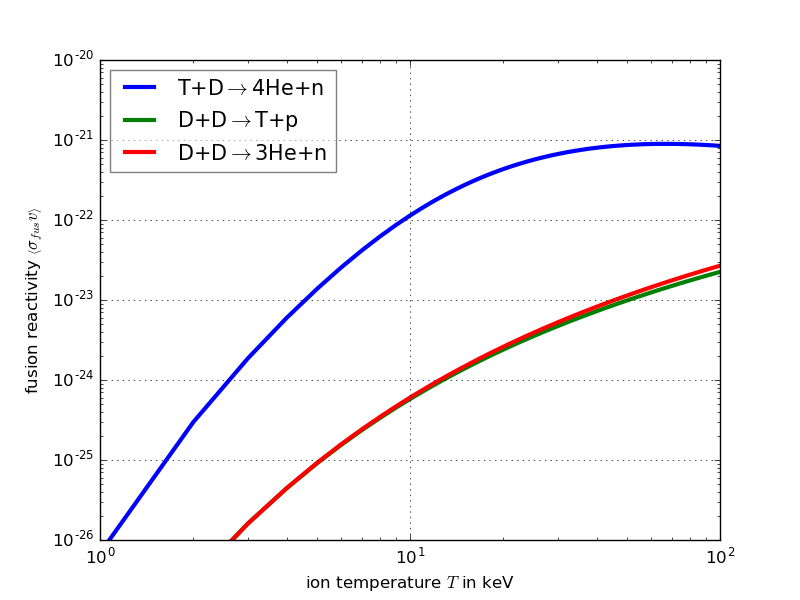 As you can see, the rate coefficient of the D-D reaction is basically increasing with energy (temperature), it will asymptotically approach a very broad maximum at temperatures which are larger by an order of magnitude (sorry for not showing but I couldn't find the necessary data). For comparison, the D+T reaction is also shown and you can see why this is favored in the lab: its reactivity is larger by two orders of magnitude almost over the full range shown here.

To summarize, you don't need to actually climb up all the Coulomb wall to let the particles fuse, finite probability for fusion does occur at much lower temperatures.

Not the answer you're looking for? Browse other questions tagged homework-and-exercises nuclear-physics fusion quantum-tunneling or ask your own question.

12
With what probability does nuclear fusion occur at energies far below the Coulomb barrier?