why is the magnetic field circular

According to relativity, If magnetic field is just an electric field viewed from a different frame of reference, why is the magnetic field around the wire is circular? 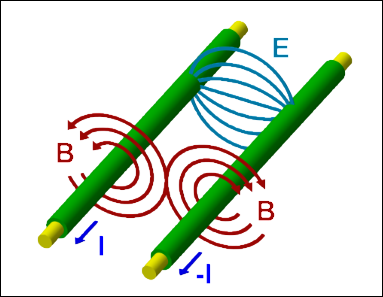 As described here, the magnetic field can be defined as (e.g. in Jackson's Classical Electrodynamics) the field that is responsible for the Lorentz force $q\vec{v} \times \vec{B}$. Since in the example you show, the force would always be directed radially for charges moving parallel to a current carrying wire, then the field must circulate around the wire.

The reason that the force associated with the magnetic field is radial in such circumstances is one of the set-piece arguments in most textbooks that deal with these things, but arises from the requirement that a charge that is radially stationary with respect to the wire in one frame of reference is also stationary in any other frame of reference moving parallel to the wire. It goes something like this:

Consider the electric/magnetic fields due to a current carrying wire in the stationary frame and a frame moving uniformly, but parallel to the wire.

In the stationary frame, the wire is overall neutral, so there can only be a magnetic field. In the moving frame there is some transformed magnetic field and an electric field radial to the wire, caused by a difference in length contraction for the positive and negative charges in the wire, which due to the current flow, must be moving in opposite directions in the stationary frame.

This electric field in the moving frame clearly exerts a radial force on any test charge originally at rest with respect to the wire in the stationary frame. But, given that there is no radial force or acceleration in the stationary frame, there also cannot be a net radial force on the charge when it is in the moving frame either. The force that counteracts the radial electric field in the moving frame is the Lorentz force due to a mystery (B-)field. As the Lorentz force due to the mysterious (B-)field is observed to be both proportional to and perpendicular to the velocity, then it is natural to define it in terms of a vector product. And in that case, in order to act radially for a charge at any point around the wire, the B-field must circulate around the wire.

According to relativity, If magnetic field is just an electric field viewed from a different frame of reference

It is true that a pure electrostatic field in an inertial reference frame (IRF) will be observed as a mix of electric and magnetic fields in some relatively moving IRFs.

However, in the general (time varying) case, it is not possible to find an IRF in which the magnetic field vanishes.

why is the magnetic field around the wire is circular?

Consider the field of an isolated point charge at rest; a purely radial, static electric field.

A little reflection on the above should convince you that, looking at the charge along the direction of motion, the magnetic field lines form circles centered on the charge.

The extension to a line of charge is straightforward.

Your question consists actually of two parts, I will answer them one-by-one:

Why is the magnetic field circular?

the second thing is:
How are magnetic and electric field related?

This now follows from Maxwells equations 3+4 other equations, that we didn't use until now. It's them that imply relativity and the transformations that my fellow posters noticed.

So really the circularity of the B-field has nothing to do with relativity. But its relativity that allows us to transform between both, no matter how their geometries are.

The first term is which you would call "circular", since $\vec{j}(\vec{r}\ ', t_r) \times (\vec{r}-\vec{r}\ ')$ points always in a direction perpendicular to the current density and the point of interest (relative to the current density). The second term is zero if the current is stationary, that is if it is not time dependant. For example, this is the case if one looks at magnetic fields induced by a wire of constant charge flow.

So in general, the magnetic field is not circular around a wire.

since magnetic field in a wire carrying current is due to the movement of electrons, I assume that the magnetic field of a single isolated moving electron, or any other charged particle, can also be deduced by the right hand thumb rule i.e. the field will be much like Saturn's ring around it, where we assume saturn to be a charged particle, and its ring as its field. Now my question is: How is this field deduced. Why is it circular? Is it the result of superposition, if any? Secondly, I know that magnetic force exerted on a moving charge consists of a cross product of B and v. But I think that this force is the result of interaction between the charge's own magnetic field and the applied field, B. My question is: How does this interaction exactly happen? How does it result in this force? Most importantly, what causes this force to be perp to both B and v (I need an explanation other than that it is just the result of cross product)? I raised a similar question elsewhere but didn't get much help. I'd be grateful if somebody explains.

According to relativity, If magnetic field is just an electric field viewed from a different frame of reference...

Relativity doesn't quite say this. Take a look at Minkowski's Space and Time: "In the description of the field caused by the electron itself, then it will appear that the division of the field into electric and magnetic forces is a relative one with respect to the time-axis assumed; the two forces considered together can most vividly be described by a certain analogy to the force-screw in mechanics; the analogy is, however, imperfect". Also see Jackson’s Classical Electrodynamics section 11.10 where he says "one should properly speak of the electromagnetic field Fμv rather than E or B separately". The field of the electron is the electromagnetic field, and it has a "screw" nature, which you can trace back to Maxwell. When you have two charged particles with no initial motion, you see linear electric force only. When you throw one past the other, you also see rotational magnetic force, as per positronium. IMHO the electron's electromagnetic field isn't totally unlike the frame-dragged gravitomagnetic field, and you can depict it by thinking "spinor" and combining radial electric field lines with concentric magnetic field lines, a bit like Maxwell's convergence + curl sketch on page 7 of this paper:

Why is the magnetic field around the wire circular?

10
The equivalent electric field of a magnetic field
0
Why moving charges cause magnetic field (module and direction)?
5
Why do these calculations of EM fields for a magnet and wire loop seem inconsistent?
5
Why are magnetic field lines circular around a current carrying wire?
1
Magnetism And Special Relativity
1
Electric Vs Magnetic Field Lines
0
If mag.field and Ele.field are same,what is the need of studying both?