Classical and semi-classical vs quantum interferometry

What is the difference between classical, semi-classical and quantum interferometry? How the detectors look like?

What are the limits of precision in each interferometry?

Any good literature on this topic is highly welcome.

In optics classical interference is when you see interference that can be described by a coherent wave-like behavior (such as in a double slit experiment or in an interferometer). A quantum picture of such an interference is that you have a group of photons each prepared in identical states, and each photon interferes only with itself (e.g. different paths interfere) to produce the interference pattern. As such you only need a single detector (or array of independent detectors such as a CCD camera) to measure the interference. An example of what this looks like (taken from here) is shown below.

The resolution is limited to roughly the wavelength of the light.

In optics quantum interference involves interference of multiple photons. This means that experimentally you are measuring correllations that involve (at least) two different points (can be two spatially seperated points or the same point at different times). In addition, to be considered quantum, the correlations usually need to be stronger than what is allowed classically (e.g. you must demonstrably have entanglement present that describes the multi-photon correlation).

An example of what this looks like (taken from here) is below. This image shows two entangled beams being generated by a nonlinear optical process. The two entangled photons interfere by both going out the same (but random) output of the beamsplitter. 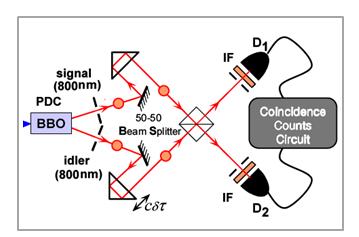 If you change the lengths between the two paths you'll see a dip in coincidences (known as a "Hong-Ou-Mandel dip"), but if you look at the output of each of the detectors separately you don't see any fringes. These two plots look like 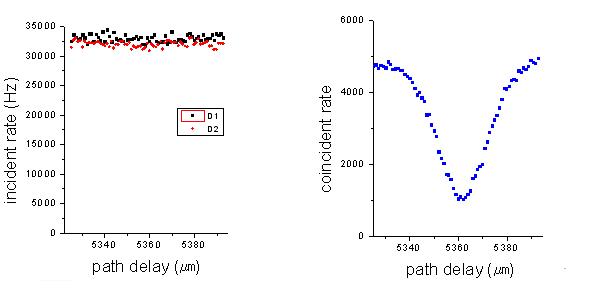 As for the resolution, you can think of a quantum state consisting of N entangled photons as like a superparticle at N times the energy, and thus 1/N wavelength. Thus the resolution is limited to roughly the average wavelength/N. See e.g. "N00N states" for a discussion of quantum super-resolution in metrology.

Matter wave interferometers use matter instead of EM radiation. Because historically matter was considered corpuscular (rather than having a wave/field like nature that light has), any wave-like properties of matter are automatically considered "quantum". Therefore a simple 2-slit or Mach–Zehnder interferometer made using matter is "quantum" interferometry, while using light is "classical," even though the principles are the same.

The resolution is again roughly limited to the wavelength (which for matter means the de Broglie wavelength).

Not the answer you're looking for? Browse other questions tagged quantum-mechanics quantum-optics interferometry or ask your own question.